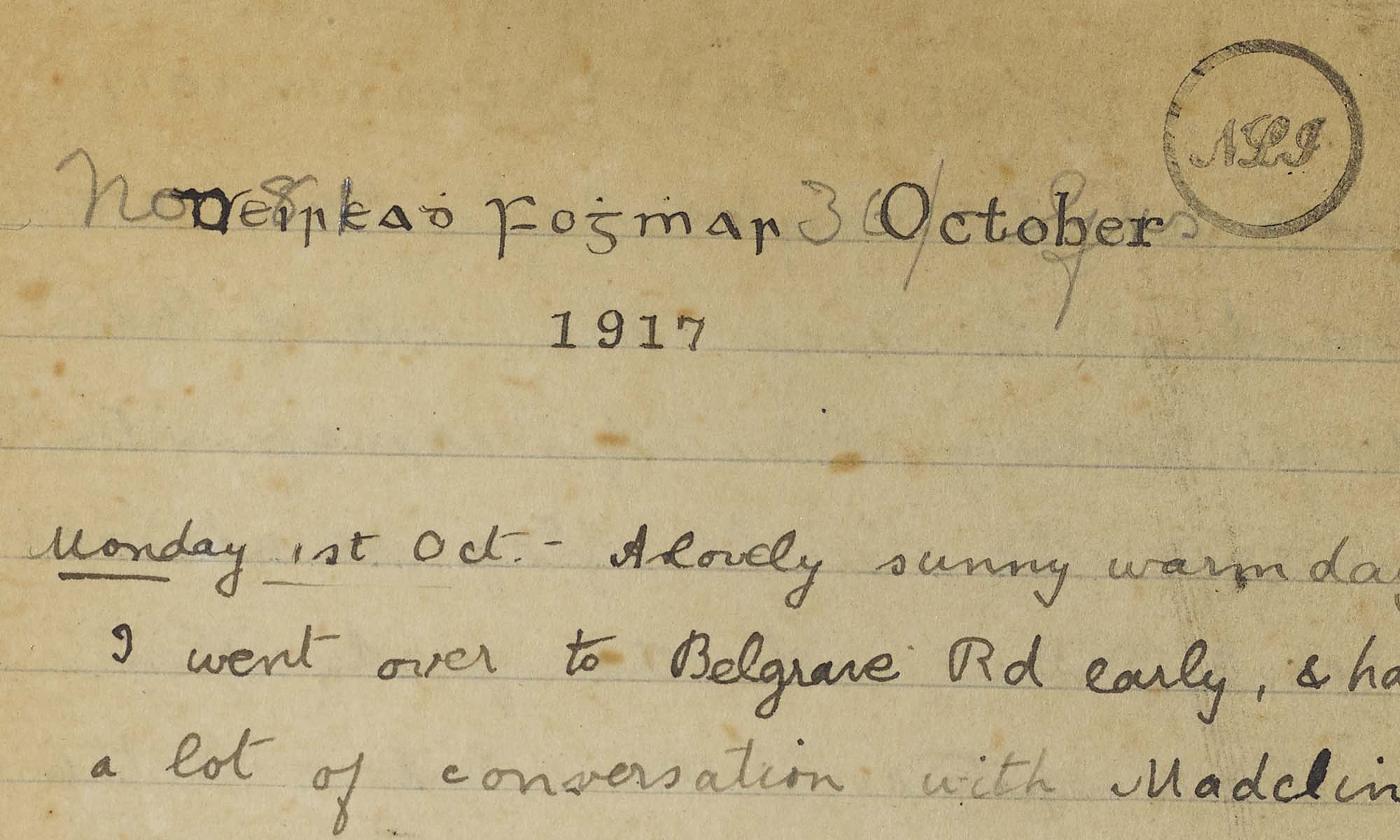 “I went to the S. F. committee in the evening, & they discussed how to make people come to the classes, & the evil conduct of two suggested members who played cards for too high stakes, & when the caretaker objected, asked what the place was for”.

Monday 8th Oct. – A frightfully windy stormy day. In the evening Mamma & I went over to St. Declan’s to attend the opening of Dorothea’s discussion club. She had sent round cards to inform people of the hour and the subject – “What is Civilization?” But most of them couldn’t come,

only Mrs Coade & Mettrick turned up besides ourselves. Tom read a piece of Shaw about the lack of progress of the world; a list of all the horrors supposed to be extinct but still happening – out of the Revolutionist’s Handbook, & we discussed it then as we chose.  Mettrick was very pessimistic about civilization, even more so than myself. We went on till ten, & then had supper & came home. It was excessively interesting.

Wednesday 10th. – I went to the hotel in the afternoon, and Kitty entertained me in the bar with Tash’s letters from Dublin af about Ashe’s funeral, and how she saw him lying dead in the hospital, & a fearful account of his appearance, rigid, with his hands clenched, & looking as if he

had died in great pain. Someone else, in a poem I think, said he was smiling. Tash seemed to have been hearing very exaggerated accounts of the forcible feeding. She is evidently a great deal better; standing about for hours and hanging on railings to see the funeral pass, & not a bit the worse of it. Then we went upstairs & had tea and they talked about the concert & Eileen Williams, Deborah Webb’s friend, who was singing at it, & Mrs Power imitated her coquettish glances at the audience. Marie was in Drogheda with Mrs. M’Court.

Thursday 11th. – I went to the F. L. S. committee in the morning, & arrived just too late to hear Boadle suggest giving it up for the winter. But I don’t

think anyone was found to second the idea. Tom brought forward his 6 books scheme, & they made a great list of names to be asked for evenings. I visited Eileen on the way out, & she entertained me in the kitchen with Darkey & coffee & biscuits, & seemed very glad of a visit.  She has no maid now, & seems pretty comfortable. She has a charwoman some days, of course.

Friday 12th Oct. – [Superscript: Visited Annie a.d., she was better, & downstairs]. I went to a Gaelic League committee in the evening, but was caught on the way by a young man from the Sinn Féin club, who said there was a meeting of the organising committee on there, which would only last half an hour, so I went to it, & it lasted till 9.30. It was, first, about its powers, & how many made a

quorum, & then about suitable persons to write to about forming suitable country clubs in places like Dunhill & Fenor & such. I was in the chair, and succeeded occasionally in bringing them back to the point from some excursion. Séan Matthews was there, & every time a name was mentioned as a possible man to write to about forming a club out beyond Gracedieu, he groaned at it in a most contemptuous way. When I got to the League at last, I found the committee just over, but I learned that the advanced class is on Tuesdays.

Aunt H. gave me the first volume of Pearse’s works, plays, and the stories & poems translated, with a picture of him which is the best thing in it, though two of the plays are very interesting. There was a beautiful picture of eastern desert & sunset sky sent to “Miss Harve Miss Jacob, to be left at Miss Harvey’s” – & we thought this was a birthday present for me, & hung it up & admired it, & wondered who it was from, & then discovered it was for Helen Jacob who was staying at Miss Harris’s, & the shop had put Harvey in mistake for Harris.

Dorothea & Eileen came to afternoon tea, & Eileen brought her curling tongs to show me, as I had asked her; & showed me how it worked. Her mother always uses it, she says. They stayed

till nearly 6, & were very pleasant. Aunt H. was in bed all this week, these few  ill, from going to the concert I suppose. Aunt Isabella sent me a brown thin woolly scarf, and Nancy a book on Clairvoyance & Crystal gazing.

I was over at St. Declan’s b.d., & found D. gardening despite her having a cold & its being a very windy cold day.

Sunday 14th Oct. – E. and J. Power called in the morning to ask intercession for a friend of theirs in the case of a house to let in charge of Harvey & Son, & stayed some time talking, about Ashe and the Sinn Féin convention. They don’t like the delegates, O’Connor & Sutton, who are going from here, & want to get me

added to them.  I should be very glad, so they said their father would suggest me. T. and D. came to dinner & we had more discussion of the 6 books. I am D is doing the desert island lot, T. the jail, Mamma her 6 favourites, & I those that I want to be given. I went to the S. F. committee in the evening, & they discussed how to make people come to the classes, & the evil conduct of two suggested members who played cards for too high stakes, & when the caretaker objected, asked what the place was for. Mr Power did suggest me as a 3rd delegate, but Wyly said they would have to pay £2.10 extra for leave to send a third, so I thought that settled it.