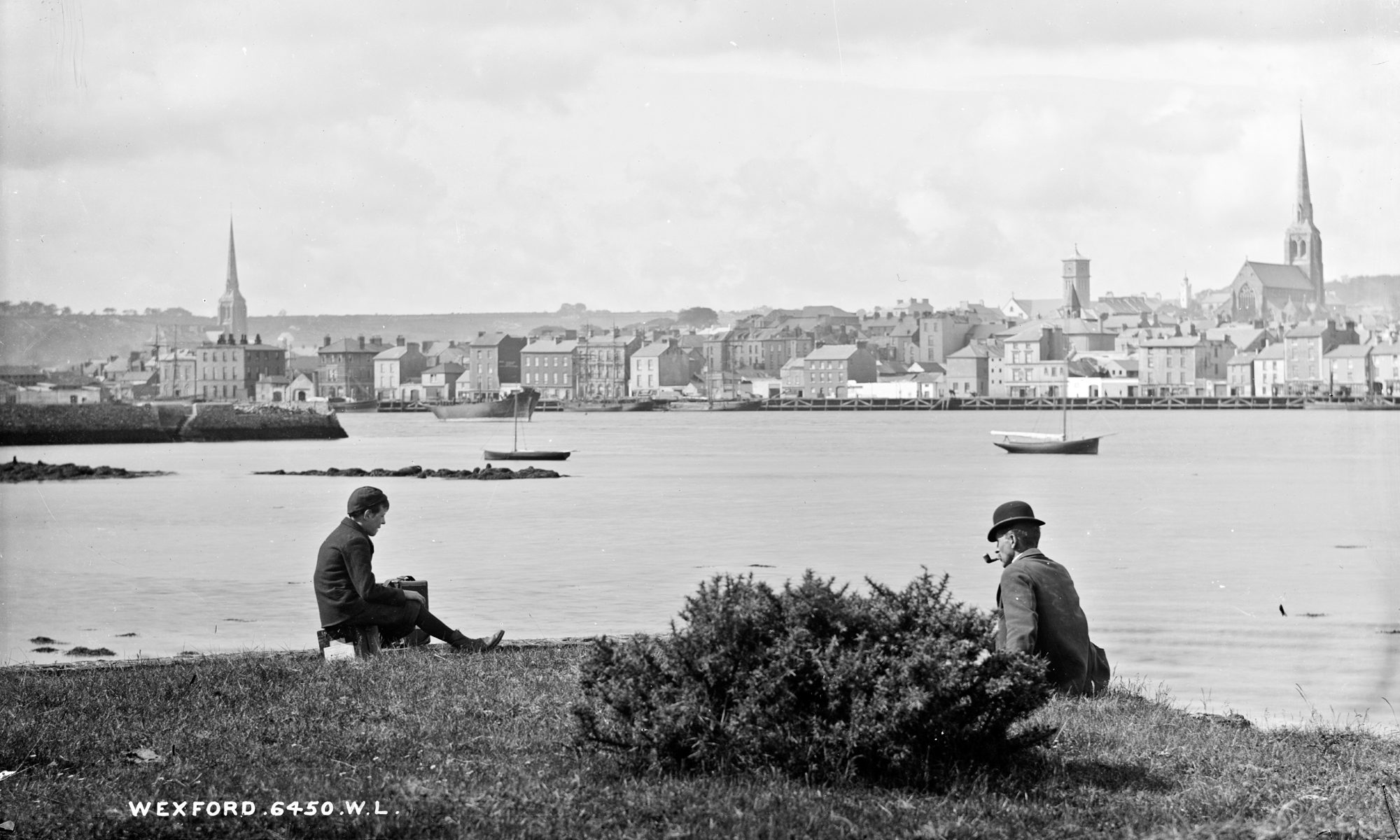 “Aunt Maggie talked very interestingly about various things, we were discussing the isolation of Tom & me as children & how I didn’t get on with other kids, & she gave me more idea than I ever had before of the horror everyone held the family in as atheists […] I never thought before that people realised it so or took so much notice of us.”

Monday 18th. – I meant to go to Orristown for a week this day, but it poured rain & I waited till the next day.

Tuesday 19th Feb. – Very fine bright day. I went to Orristown by the 2.35 train, carrying my basket on the saddle of my bicycle. There were 2 nice dogs in carriage, the one got out at

Campile, and an old countryman was interested in the dog that stayed, & gave him a piece of bread, and talked of the wisdom of his own 2 cats, and afterwards when the dog & his man were gone, talked to me about Wexford & Dublin & his travels in Wales and gave me the address of a soldier friend in Dublin, for me to visit when next in town, & tell him, Robert Jacob sent me. He lives near Whitechurch, & mentioned several Jacobs in those parts, all along the line, & promised to come & visit us when he was next in Waterford. Mr Byron met me at Killinick. The daffodils were all coming out by the avenue. I told them about the old man in the train & Aunt Maggie said she thought all Jacobs were Protestants, but I could hardly imagine he was. They had a Free Press with very interesting letters in it, some priest had

[Transcriber’s note: Small pencil drawing of the façade of a building/doorway featured on the top left-hand side of the page]

been warning parents against letting boys & girls to go to Sinn Fein club Gaelic League classes to be insidiously & unconsciously turned into Sinn Feiners, & P. Kehoe had a very good letter against him. There were attacks on Caitlín de Brún who had been going round with the plebiscite, which was described as “Sinn Féin tricks”. She went to French M.P’s house & his maid Maria Doyle sent her away, & she spoke of this girl in a previous letter as “the girl Maria Doyle”, which was resented in a letter purporting to be from Maria Doyle, but which looked as if it was composed by someone more versed in politics. Mr Byron told me at tea that if I ate plenty of blue duck eggs I’d get “a great red neck” – which he seems to think very desirable.

tabby thing, Jeffrey. Aunt Maggie talked very interestingly about various things, we were discussing the isolation of Tom & me as children & how I didn’t get on with other kids, & she gave me more idea than I ever had before of the horror everyone held the family in as atheists. Children at Fethard telling Marion that Connie & Bestie Poole said we were atheists! and a lot of Mrs Williams’s friends thinking her very wrong to let Mary W. go to live at Grange. I never thought before that people realised it so or took so much notice of us. In the evening Byron played 45s with us – it is a terrible complicated dull game – & when he put down a good card, he said “Pick your teeth with that!” We played a little casino too.

I went to the station for the paper in the morning. A Mr Walker who lives beyond Killinick came to invite Aunt M. to aft tea at his house – he is a brother of Dr Wallace of Port Lagha. Aunt M. was giving me good advice about my clothes – she thinks 9. 13. 0 not enough to spend on them, and had accounts of people being shocked at the old fashionedness of her clothes in Dublin. The labouring man – Ned – drove us to the Walker’s place, about a mile. They have a grove & a general aspect as of a lovely garden & wild places behind the house. Mrs W. is a cheerful pleasant looking woman, her husband has something very engaging about him; he is big & cheerful with a very nice voice; & they have two buxom red cheeked dark haired sons of 14 & 12 or 15 & 13, Frank & Herbert, and a delicate older one, Jack, who

was all most of the time at his lessons. There was a nice white dog too, partly a bull terrier. Mrs Jeffers, a good-looking old woman, very cheerful, her step daughters Mrs Nunn, a widow, rather handsome & with a fashionable black velvet gown, and a relation of theirs, Miss Phillips, not salient in any way, were the rest of the company. We had an excellent sit-down tea, minus the boys, and then sat in the drawingroom looking at Illustrated London News & Bilby’s Annual, with wonderful, coloured pictures of thoughts, good & evil, in it. Then we played whist, or some of us; Mrs Nunn & Miss Phillips & Herbert & me. We were unlucky first till I turned my chair round & then we flourished & won. Once, when our luck seemed waning, Herbert thought to turn his chair, but Frank clocked him. Mr Byron came for us at 8, & a different set began playing whist then. Aunt M. told me Jack had been & still was delicate, & if so he

is let do too much  lessons.  Mr Byron had been at a fair in Inis Corcaigh.

Friday 22nd Feb. – A middling fine day. I went for the paper as usual. After dinner we all drove in to Wexford, to shop and have tea at the Rowes’, Mrs Coade’s parents & sisters. Byron left us as soon as we got to the town & of the usual interminable period of waiting in shops commenced. Aunt M. is a slow shopper anyhow, and country people I suppose must always shop with more length & deliberation than those who can go to the shops at any moment, & the Wexford shops are very badly served besides. At last, after a sitting at the dressmaker’s we got to the Rowe’s, & found Mr Byron there. I was hardly speaking to Mrs R. at all, she is small & looks a comfortable kind mother, & Mr R. is tall & patriarchal looking, with a

white beard, very down on the Germans, wdn’t allow but that all their socialists were as keen on the war as the government, but believes [superscript above: in a general disarmament after the war] & in a spiritual nature of Christ’s second coming. I forgot what put him on it; he talked to Byron all the time. All the time after tea I was talking to Miss Rowe & she is rather like Mrs Coade, but younger & handsomer, very tall & slim with a nice voice something like Emer’s. She has the same birthday as I have/ From opals etc we got to souls & The Perfect Way which she says she is rather fed up with Anna Kingsford – & she is comfortably certain of another life though not of reincarnation, & believes in a deity, but thinks the 2 opposing forces theory the most probable, considering the nature & amount of cruelty in the world. She talked about spiritualism in a very level headed way. I was telling her of Ned Stephens’s doctrines of the wickedness of

coercion, self or any other kind, & it entertained her greatly. The instance of necessity for coercion that she mentioned was the cruel instincts of children “especially boy children” – you must protect things against them. She teaches a class of girls privately, being a B. A, & the house is full of books, but mostly the kind I can’t read. We borrowed some when we were going. We had a young white cock in the trap that Aunt M. had bought & admired very much – as she said, his gorgeous red comb made him look like a flower. He was partly asleep most of the time.

Saturday 23rd Feb. – Nothing doing this way; I went to the train for the paper, & wandered about the road & the fields across the river in the afternoon. Aunt M. talks a lot about the fearfully hard life of single women with

no independent means, like Marion which indeed it wd be hard to exaggerate and seems to think it better to marry any man, so as he’s “good & kind” than to go on with it. All the same, she doesn’t think Marion wd be happy married.

Sunday 24th Feb. – Cold windy day. I didn’t go to church, but I walked there (to Killinick church) with Byron, by way of a field with horses in it whom he wanted to inspect, & he showed me all the tombstones. There were daffodils there too. I was in great dread of the clergyman coming before I got away, but he didn’t. Aunt Maggie stayed comfortably at home. I read the Countess of Mayberry which we had borrowed from the Rowes’, & it was very unlike Maxwell’s other books; far funnier for one thing. Its queer how fond one gets of the phrases invariably accompanying a certain name “Anthony who had completely outgrown

his strength” – Ellen “who was then but a child” etc, & the housemaid’s remarks on Anthony are very good. Mr Jones the dentist from Wexford, a great friend of Mr Byron’s, came to tea about 4 o’clock a not very attractive young Welsh man with reddish hair & a light suit, who started smoking the instant he got into the drawingroom, to Aunt Maggie’s disgust. After tea we talked about Wales & got a lot of interesting information out of him about place names & the language etc. It seems Snowdon is not a Welsh name at all; the Welsh name is quite different, something like I forget it. After a good deal of this, he suddenly demanded to know what was wrong with the Irish that they couldn’t do anything but talk & abuse the government, they have lost their language etc etc etc, & have no industries etc etc etc & they must be a much weaker race than the Welsh,  and so on

Aunt M. of course agreed with everything he said, & that was the end of all peace & comfort. Every Sinn Féiner Jones has met appears to be a grasping selfish nagur [sp.?]. When he was gone I remarked to Aunt M. on the rudeness of such unprovoked abuse of Ireland to Irish people, & she could not altogether deny it.