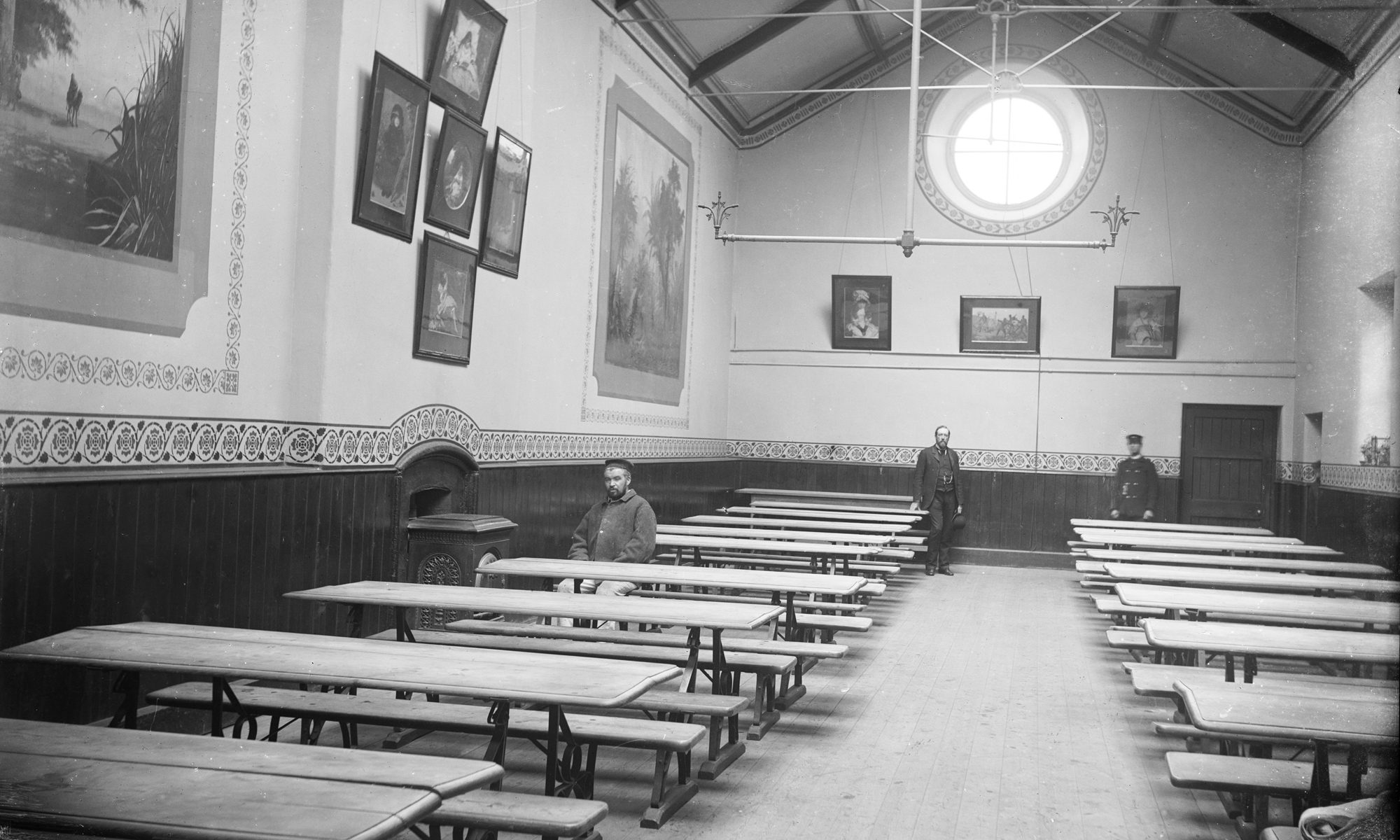 “I went to town in the morning & in the afternoon to the Powers, who produced a tall good-looking young man named Murray, on the way to be a priest, & sent him & me to the asylums. We went to the Walsh place at the foot of Convent hill, and got the names of 12 old women there – the matron brought them in to us one by one and I think it was quite a piece of entertainment for them.”

Monday 4th March. – A very fine bright day. I went to town in the morning & in the afternoon to the Powers, who produced a tall good-looking young man named Murray, on the way to be a priest, & sent him & me to the asylums. We went to the Walsh place at the foot of Convent Hill, and got the names of 12 old women there – the matron brought them in to us one by one and I think it was quite a piece of entertainment for them. Two wouldn’t come, & one turned us away when we came to her, & two were out, but all the rest seemed very pleased to have a chance of signing. Then we went on to the Asylum on  [space left blank], and went from house to house, beginning with Miss Hearne, who was very good to us, & came from house to house & room to room, explaining us to the occupants “This lady & gentleman have come to get your vote that Ireland may be free

after the war” – or maybe it  “to ask you to sign your name”. Only 2 refused us there, & we got 8, including 1 who was eagerly looking forward to Redmond’s death, & 1 who was 100 years old. We came back then and found George Lennan, who had been acquitted of stealing the rifle, sitting with the Powers; a cute looking boy with a turned up nose & a likeness I thought to Tash. He went away soon, & I stayed talking till nearly 6, which wasn’t long, and fixed to go again somewhere on Wednesday. I went to a Gaelic League committee in the evening and it was all about Lá Feile Padraic. They scorn to ask a permit for either the flag selling or the procession; even nobody seemed to think of it. I went on to look at the women’s trade union meeting that D. got the J.C.

men to get up, and tried to get Miss Chenevix to speak at it but she couldn’t come till Thursday. There were a couple of men speaking very well to the girls. I came home with T. & D. afterwards

Tuesday 5th. – I went with Dorothea in the morning to the place in Barrack St where the food depot is, Mrs Banville’s, to learn to make little meat pies with her. Mrs. B. showed & instructed us, and we made 24 little round pies with lentils, onion, chipped potatoes & a bit of sausage in each. It was a roasting little kitchen, with a huge pot of soup on the fire. In the evening I went to the hotel, and who should I find there but Harry Boland. He was on the point of departure for Dublin, but meantime he sat by the fire & talked while I had tea. Mrs P. was asking him about the terms after Easter Week, & he said he did not believe there were

any. He went for his train [superscript: Dublin train] then, and Tash had just begun trying costumes from Robertson Bros, on me when he returned, having missed it. He couldn’t send a wire either, but he was very cheerful about it. He is a pleasant looking young man with black hair & a brick read face and a very cheerful and frequent grin. Kitty and Tash amused him greatly asking talking about girls at the convent school, one of whom he was knew & was talking of, & talking of Figgis too.  Tash said he was just like her red Sussex cock & he was very tickled at that. Then he got talking about his time at Lewes and the transfer from one jail to another in convict clothes & chains; it seems those that have their parole so as to go in plain clothes were always called the swankers afterwards.  There was a priest there named Finnegan who attended them, & who told

H.B. he was a naturalized Englishman, So I said to him “if man will deny his country will deny his God. – Get out!” There was another named Loughlin who was always trying to make them be meek & biddable. He told how they got a secret message from Ireland in [superscript: of a wire to him – ] in the form “Uncle Tom is dead” – & how tenderly one of these priests broke it to him. I had to go to my class at 8.30, & I made a great laugh there by saying Máire Ghearra [sp. ?] was a fool if she was satisfied liked Seadna’s declaration that he had promised God never to marry.

M Wednesday 6th March. – I went to the Tech and made infinitesimal progress with the ring, twisting silver wire etc. Miss Flynn told Miss Courtney & me of Redmond’s death, & afterwards I heard the Brother that makes the clay map saying to Shea what a pity it was.

I went to the Powers a.d. to meet Murray, but he never came, and we spent an hour or so talking of Redmond’s death & the election. Wheeler went to Dublin about it that morning, but they said he & Gallagher tentatively suggested would it be well to have an election at all. I went to the club in the evening & found them discussing a possible candidate & young John Plunkett had come down from Áth Cliath with a letter from the executive. There was a tall good looking young man named Doyle too, a pork butcher I found afterwards from O’Mara’s in Limerick. They began going over the register then, with me in the chair, though I wasn’t much use there, & it was marvellous how someone knew every man in Barker St, Francis St etc. I left them at it.

Thursday 7th March. – I went to the Powers a.d. to do plebiscite work, but they had decided to do no more till after the election, so they took me for a walk out Barrack St and the old Cork road instead, & it would have been very pleasant if they had refrained from abusing Parnell, a propos of Redmond’s corruption & downfall. We visited the water works at Tycor, and there is a nice little trim garden round them. I didn’t know the public were let in.

Friday 8th March. – I went to the Tech & the Brother, being there again, told me he had heard Mr Murphy talk about Papa’s images, & was curious to know how he baked them successfully, having tired with the pipe clay they use there, & failed altogether. His clay was some different sort. I would have asked him to come in & see the images only they are so naked.

I went to Mrs Tarpey’s meeting about venereal disease in the evening, it was in the council chamber and was very well attended. There was a crowded meeting of lamentation over Redmond going on in the large room next door, with bursts of applause that periodically drowned Mrs Tarpey. I went on to the club at 8.30, found M. New & Miss Skeffington [superscript: & I think the Powers] making flags in the outer room. I went inside presently & found men sitting round a table writing lists of electors in canvasser’s books. N. Whittle gave me a book & a list & I joined them. Presently in came Milroy & others & a sort of informal committee proceeded – Milroy taking the lead. Dr White seemed to be the choice of most, & Dublin also wanted him. One spoke up for H.D. Keane but he was turned down, not being a member of the club. Milroy said he couldn’t possibly consider this a meeting to choose a candidate

& it was fixed to have a committee & a general meeting on Sunday night, the latter to ratify the decision of the former.

Saturday 9th of March. – I went to the hotel a.d. & found Marie alone. They had 8 electioneering men there, including Dan McCarthy & Milroy, and were expecting 20 more at least. Maire spoke of the awful difficulty of feeding them, & said she wd be glad when it was over.  Presently Kitty & Tash came in, K. very downhearted because she had heard that one of the hungerstrikers was dead, and they also wished the election was over. Then Mrs Power came downstairs & I said sympathetically to her that she wd have a dreadful busy time, but she replied “Oh, it’s delightful!” If Tash was stronger I expect she’d feel the same. But they have 8 concert people there too, coming in at all hours, & Tash, when we were at tea, gave an awful

imitation of one of these demanding meat etc at 12pm in a frightful accent & manner. They don’t like Dan M’Carthy; they say he insists too much on being comfortable himself, & treats the staff like little boys.

Sunday 10th March. – D. & T. came to dinner, and speaking of temperament, D. said Tony & Nancy would never be real singers because they hadn’t it. I don’t feel exactly clear what it is. I think D. spoke of it as incompatible with cautiousness. They went home to tea because Séan O’Floinn was coming to them, & Uncle E. came to tea to us. I went to the club afterwards; the committee had advice from Áth Cliath & chose Dr White unanimously, with great praise, & then he was presented to a large general meeting & he & Mr Milroy & Cosgrave all spoke. Cosgrave’s speech was rather dull, he hadn’t a good delivery.

Milroy’s was better, but he put in some stuff about wanting the old women to “cajole” the men, & the young women to use their needles – making flags & badges. I told him old & young wd do more than that, though I wasn’t at all sure of it, & Mrs Phelan thanked me. There was to be a meeting on the Mall next evening, & a committee after it.