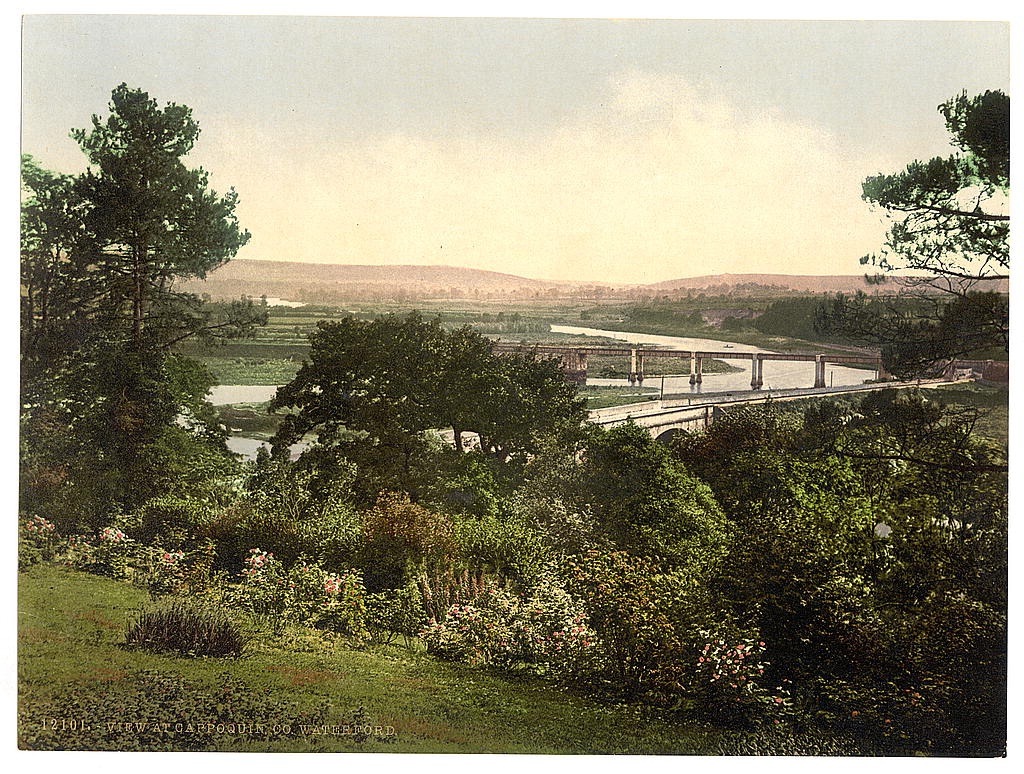 “Bro P. told us funny stories of his objections to women coming there with low necks & “no sleeves” as he said, but I don’t believe it. They may meet the boys & young teachers, & its “not fair” to these. They shouldn’t go about anywhere with really low necks & no sleeves, but what lumps of sex-feeling pure & simple men & boys would have to be endangered by that.”

Monday 15th April. I went out on the furzy place opposite the hostel before breakfast, & walked about there & discovered thin streaky ice on the little pools. The furze is all in bloom & the view of hills across the little ravine up & down the stream was beautiful. I found low mass on again, but there was no sermon this time & it was much shorter.

After breakfast we went to the “bead shop” & talked to the monk there, Bro Aidan by name, a fierce Sinn Féiner who read passages out of Patrick Henry’s speech about Liberty & Pitt’s speech against the American war to us & said the boys in the school find them very applicable to present day events. He has a great down on Bro Patrick for being a Redmonite – at the time of the Rising Bro P. said something beastly about the rebels which he can never forget. Bro A. spent most of his life in England & has a bit of an English accent. I went for a walk over the hill then, down the other side & back by the road. It was a splendid walk, the road was almost the best part of it, with the furze blazing at both sides up one side to the hill & down the other to the stream.

After dinner Mrs P’s car came, & I went with her as far as the foot of the hill & was then directed along the lane to the salmon-leap, which I eventually found – a very fine waterfall in a wood, with all the water gathered into one big white spout making a terrific noise down between the rocks. The space between the rocks was so narrow, & the pool so dark & deep that it was rather an awe inspiring place altogether. I stayed there a good while & came back across the fields to the road & reached home in time for tea & compline. I had some talk with Mrs O’Loughlin at tea, she is from Rosscrea & knows the Pims & the Cumminses. She gives the impression of a very kind gentle woman & perhaps rather meek.

Tuesday 16th. – Another fine sunny windy day. I went to high mass, or a little bit of it, for

I was very late. I went up the hill again after breakfast & when I came back towards dinner time I found Kitty & Tash sitting by the fire with Bro. P. I was expecting Kitty by the afternoon train, but I never thought of Tash coming. She wasn’t well either; had a pain in her side all the afternoon. Bro P. told us funny stories of his objections to women coming there with low necks & “no sleeves” as he said, but I don’t believe it. They may meet the boys & young teachers, & its “not fair” to these. They shouldn’t go about anywhere with really low necks & no sleeves, but what lumps of sex-feeling pure & simple men & boys would have to be  endangered by that. Of course if the objection is for fear their modesty would be abashed, that’s a different thing, but I’d like to know. We were talking about the

bringing up the children & the spoiling of boys too – the Coolayna boys are allowed to come down to breakfast without having done any washing – & Bro P. told of two occasions when he had rebuked parents for of bold spoiled children for bringing them up so badly – he must have some moral courage. His mother never said more to him that “Won’t you be good?” but he had a very severe elder sister. We went for a walk presently through the fields to the right as you start down the mountain, wandering about & sitting among the trees in the little strip of wood beyond the first field. They are lovely places. You could get up to Cnoc na Fallia that way, but it’s a good distance. Kitty & I went to Compline, & she’s frightfully devout; never seems to sit down in a church. Then we went

down to the hotel and went to bed early and Tash was rather ill in the night.

Tuesday 17th April. – Weather as usual. Kitty and I went to high mass and Tash to low mass at 8.30. and Kitty stayed on for it too. I retired to one of the parlours in the guest house and wrote a letter. There was always a grand fire in the dining-room, which was very welcome these cold mornings. We were still in the only visitors. We went for a walk up the mountain then, through a long strip of wood which brought us out on the hillside just below where the heather begins and some distance to the right of the cottage you pass where you go up by the ponds. We went over the hill, meeting a strong wind as usual, and down the other side, and rested on the side of the road, looking at the lovely colours and shadows on Cnoc na falla in the sunshine. There are no primroses in those parts, I suppose its too bleak for them, and the heather was at its worst, all brown and withered, but that seemed to make no difference to the splendour of the landscape both near and far, and the furze was all in a golden blaze along the roadside and down the slope to the stream at the other side.

We went up a boreen instead of going round by the gate, & through some nice fields & home through the wood next to the poultry town. It was fine to be able to wander wherever you like in fields like that. We got back before dinner time & after dinner we visited the bead shop & Tash bought me an Imitation of Christ for a present, it being the most non political sectarian thing they had. We had an interview with “Father Stanislaus” the Prior too, a pleasant man in the usual affable cleric manner. Tash was afraid to go home without meeting him. Tash was afraid to go to the train by herself for fear she’d be ill on the way, so Kitty & I went to the station to see her off. They thought me a great fool because I would walk down the very steep bit of hill. The bluebells were coming out on the rocks in the wooded part of the road. We

saw Tash into the train & bought some sweet & buns at a shop in the Main street, & walked back by a short cut, through the estate of one Johnson just outside the town, and onto a frightful rutty old road over the hill  which joined the new road about a mile from the monastery. Kitty was very tired, so we didn’t go up to compline, but went to bed early. I had given her my red cap, which they all said was very unbecoming to me, & it looked lovely on her.

Thursday 18th. – We went down the mountain to a nice little wood in the morning & sat on the wall between the wood & a field for a long time. They got news a wire in Latin this day from the Abbot who was at the bishops’ meeting at Mág Nuadat [Maigh Nuad/Maynooth?] commanding that all the boys at the school be sent home, rather for fear of conscription or a railway strike

I don’t know. Kitty could hardly talk of anything in our walks but which would be a good place to hide in or to keep food in, or so on. But it was this day that she told me how they used to do nearly as much school on Sundays as on weekdays at the Newtownbarry convent.  We went up the hill in the afternoon & lay in the heather for a long time. We decided to go home on Friday evening instead of Saturday, for fear of the railway strike, which people said was to being on Saturday. All these days parties of young men came to make their souls at the monastery in preparation for conscription.

Friday 19th. – We went across the river stream in the morning & sat on the bank on the far side of it; there are little paths about up & down there, leading from house to house, &

a little bridge over the stream, but we came back by stepping stones. Dinner this day was only bread & butter & tea & boiled eggs – I had been hoping for fish. There were 4 fly scornín girls out of a motor there, who talked about mixed hockey & rowing & general confessions & school – one of them had school on Sunday at her convent, but another had not. They admired Bro Patrick as everyone does; its to his credit to be even as modest as he is. I don’t know how any of the monks that meet people are able to keep humble at all, with the admiration they got; people should have more consideration for their souls. We went to the bead shop & I bought a holy picture for Mrs Kinsella & K. presents for home, & Bro Aidan drew a lurid picture of the bad anglicizing influence of the monastery on the neighbourhood – nothing had done so much to ruin the language in the

district, & they don’t teach it at all thoroughly at either school – in fact they are a whited sepulchre. I wish Mrs Power could have heard him. I don’t think Kitty believed it all. He says it is all scóinín contempt of their own country & language. After dinner we went up the hill again through the trees & sat there for a long time. Bro Patrick gave us early tea before we left for the 6.15 train. The country was exquisite with young leaves a furze & primrose & daisies, & brilliant green fields & its own natural beauty of structure, but the train was intolerably late. I went to the hotel with Kitty & Tash was charmed to see her, but was no better herself, still had the pain in her side & was quite an invalid. We had tea & Mrs P. talked to us & Tash turned against Kitty because she considered Tash K. was not nice to her. I had

to carry my double basket & all the way home, as there were no cars. I found Mamma in at Suirview, of course not expecting me at all.

Sunday 21st. – T. & D. came to dinner, & I had to go off to a meeting at the club about the first aid class just after dinner. There was a committee in the evening too of course& instructions from Dublin. [unclear short hand text]