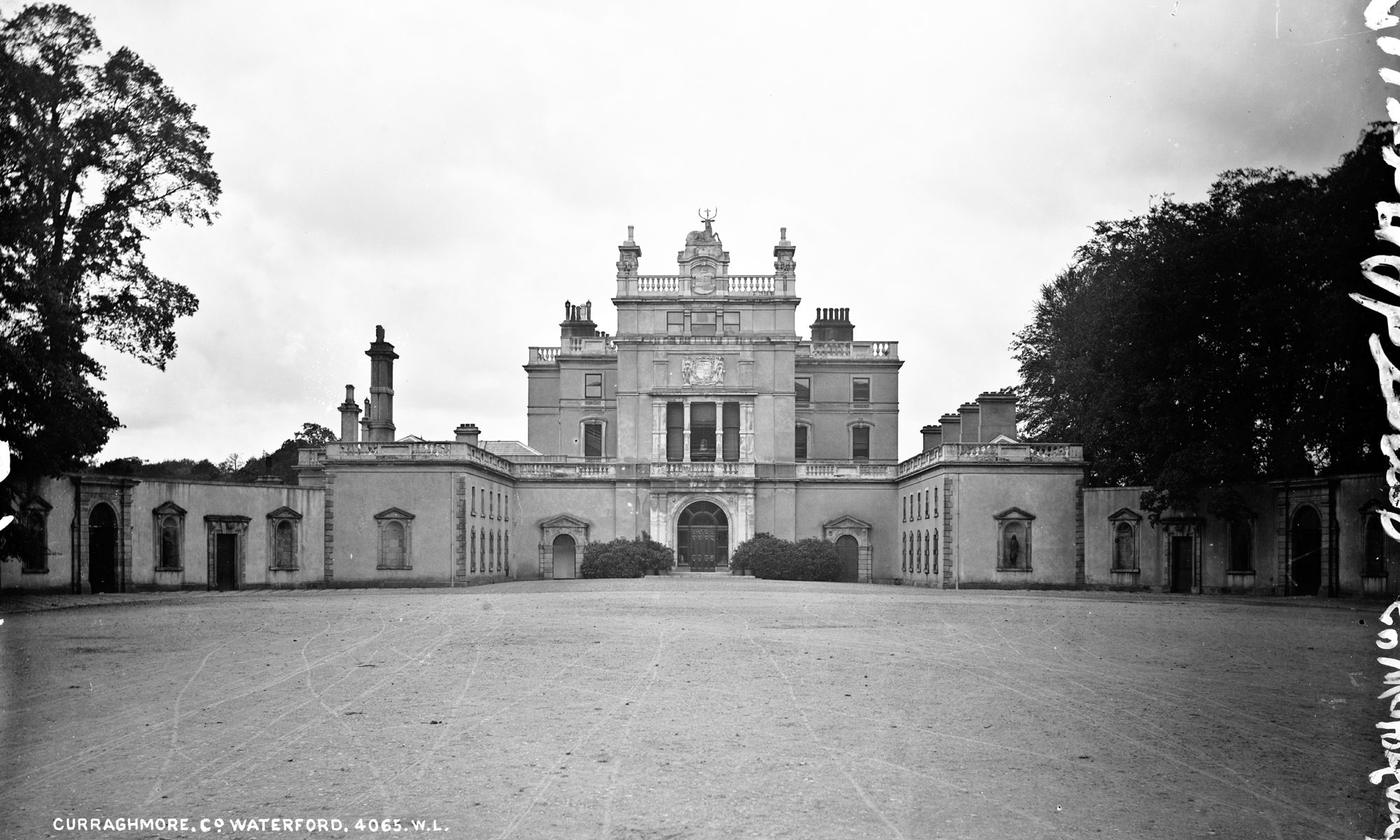 “C. was disgusted with the old men, especially F. Pim. Janie is very sure conscription is coming, & seems to have the worst possible opinion of the government’s motives.”

Monday 6th May. – A solid wet morning. The doctor was called out in the middle of the night to a case of lockjaw out the country, & he had to go out to it again in his motor at about 12, so he took Mrs M. & Brighid & I with him for a drive. It was somewhere beyond Coolnamuck, which was found to be punctured just as we got to the place where the patient lived, and the doctor & Mrs M. had to put on the spare one when to come back from his visit. It wasn’t raining much there, and we picked a lot of primroses off the side of the road. B. talked about Mount

Melleray & the time she & Una were there, & she & Mrs M. were rather learned about lockjaw. B. was in a London military hospital for some months as a sort of V.A.D. nurse, & Seán Ó Floinn told us she was going to the mischief. We went on through lovely places full of furze and woods till we came to the great wall of Curraghmore where the evictions were after the election, of 1826, and followed it a good way, coming back. The country looked exquisite in the wet, crowds of primroses everywhere, but I don’t remember any cowslips. Brighid stayed to dinner, & after dinner she & I went to visit Seán Ó Floinn & his library. The latter beggars description, he had hordes of neatly bound volumes of miscellaneous pamphlets, and every possible book that would be needed in writing a history of Ireland, which he certainly

ought to do. If there had been time I believe he wd have showed us every book separately, though there are about 2000 of them. I borrowed 3, Seact buaid na nEirige Smac, Shawn Misalliance eir, and a little book on Shelley. Soon after I got home it was time for Mrs M. & I go to tea at Mrs Dowley’s. I had forgotten what a noble room their drawingroom is. Mrs Dowley looked very familiar somehow. She talked a good deal about Una, & showed us photos of her and gave me a very nice one. We had a gorgeous tea, with stewed pine apple & pancakes, and then Brighid showed us a lot of artistic magazines, Studies and “Colours”, with some very interesting things in them. She has much more appreciation of modern art than I have. She & Mrs Murphy both came to the train with me, &

I got home by daylight.

Tuesday 9th. – Eileen & I went for a ride a.d., out that road back from Gracedieu paralled with the river, that comes to an end after a couple of miles. It was a close muggy day, but the view across the river was beautiful. Croker send me 32 first aid books, the girls having only paid for & taken 8 of the 40 I ordered, and I took the lot down to the class that night to try and dispose of them. 22 were taken, but only 10 paid for, & Miss Skeffington took the other 10 to try if she could sell them.

Wednesday 8th May. – I went to the Tech & proceeded with a copper brooch. I visited Grace Bell in the afternoon, & tried to get something out of her about the peace discussion at the G. M., but failed of course. Miss Elemes had been minding Ruth while they were away, and was there

Thursday 9th May. – I went to Jennings in the morning, & happening to mention a fine orange cat I had seen on Dr William’s doorstep, he began talking about pedigrees & cat shows, & showed me all his cat’s pedigree & a book full of photos of lovely prize-winners. Then he had to send me off with my tooth half done because a woman waiting below who had to catch a train at 2 o’clock. Tom & I went for a ride out to Ballycanvan House as I believe is the name of the place, in the afternoon. It was a glorious fine hot afternoon & that road towards Cheekpoint is one of the prettiest in the country. The banks were full of primroses & the field at the top of the lone hill was a mass of cowslips against the sky. We went down to Ballycanvan House which is a melancholy looking deserted

old place in the midst of the fine trees & with a slope straight down to the King’s Channel before it, and a splendid view over the river & the island & the distance towards Waterford. We sat on the edge of the terrace & watched a man driving cattle in the field for a bit & then went back & picked cowslips in the field at the top of the hill. I went to the Fianna Hall in the evening & read the girls a lesson on the end of the 9 Years War & the Flight of the Earls.

Friday 10th May. – I finished the copper brooch which was enamelled successfully without a little separate plate, & started the turquoise ring. I visited Charlotte in the afternoon, & we sat in the garden & she told me about the peace discussion at the Y.M., how the old men chattered & wouldn’t give the young ones a chance

& it had to be adjourned till next day, expressly for the young men to give their opinions, but the old ones began again & had to be muzzled. At least Benjamin Haughton had, & then the young men got a chance, & turned out much more pacifist than the old ones. C. was disgusted with the old men, especially F. Pim. Janie is very sure conscription is coming, & seems to have the worst possible opinion of the government’s motives. I went over to St Declan’s to sleep, so as to get a decent bath. Tom went to Cork by the early train the next morning, for the weekend. He went to a monthly meeting that evening, where they discussed the yearly Meeting, & they spoke in a very fushionless way about the peace meeting.

Saturday 11th. – Fine warm day. I cycled out to Tramore a.d. to visit Bessie, who was at home

visiting her family after attending the Yearly Meeting. I got out there in ¾ of an hour, and found Bessie had been expecting Katie and Charlotte too, but they didn’t come. Bessie was busy tracing patterns on a sideboard-cloth with a hot iron, asking her mother’s advice and then not taking it. She showed me her wedding group, which was good of all, and particularly nice of her and Aubrey Harding, but it was impossible to tell form it who were being married. We went down to the sea and sat under the wall of the esplanade, the tide being in, and were persecuted by a little fox terrier that wanted me to throw stones for him. There were fine waves, and it was a lovely warm soft afternoon. Bessie expatiated on her matrimonial happiness and the delightfulness of her husband, and how pleasant it is to be married, if you get a nice fellow. The place looked very well, and the railway garden was coming into flower. Edith’s baby was visible in it, a fat pink blond thing in a white frock. We found Willie Hill at Easton when we got back, and of course he had to say ‘Up De Valera!’ to me.

But he seems very set against conscription, & even advocated boycotting those who wouldn’t sign the pledge or the protest. I paid a visit at Midvale after tea; they have a little Yorkshire terrier named Fanny, one of Miss Medicott’s dogs, who will hardly speak to anyone but Jessie & Dorothy & Bernard, but especially Jessie. Charlie told me they sometimes had debating evenings at Newtown, mostly on political subjects, but they boys were hampered by having no access to the newspapers. He & his family describe Mettrick as “Trixie”. I had a lovely ride home.

12 May, Sunday. – Fine hot day. I went to meeting, to hear the minute on peace from the monthl Y.M. read, & it was a fright. Let every man seek prayerfully what is right

to do, & do it, & while we wouldn’t say a word against these Friends who have thought it right to take up arms, we, reassert our belief that all war is against the words & spirit of the gospel of our Lord Jesus Christ. They laid stress on the importance of liberty of conscience, & on their desire to serve their country – meaning England – which I belief signifies that they are willing to do alternative service. I am told the minute was modified by the old men when the young ones were absent on the Monday morning. H. F. White gave 2 long orations some of which I couldn’t hear, and the rest repetitious of a couple of texts strung together with rot. J.J. Bell complained that people at worship don’t think half enough of the sufferings of men killed in the war & their families at home. I went on to the hotel then, I

forget what for, and they sold me a white silk blouse for 14/- ; a very nice plain one, but it’s a lot of money. When I spoke of the dearness of something they wanted me to buy, they suggested that I should send the bill to Uncle Edmund. Tash is very ferocious about that grey hat; it always looks rather nice one me.