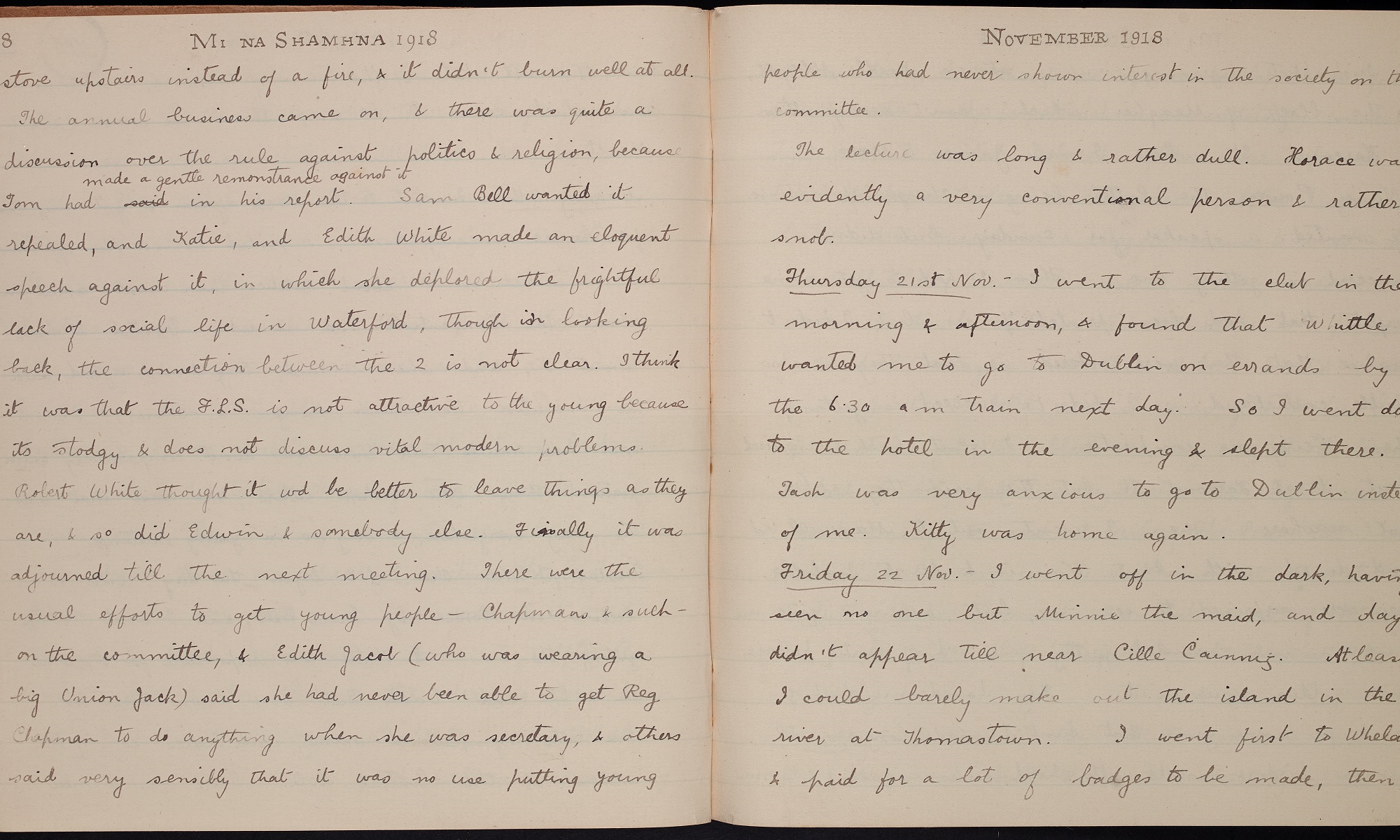 “Then I had to get some leaflets that had been printed for us, but I didn’t realise that they were ordered, or that they were so terrible contraband, so I didn’t succeed in getting them, being no conspirator. I went back & enquired about it at Harcourt St but they said they cd be got nowhere.”

Monday 18th. – I went to the Tech again & got my ring for Annie nearly done. I visited her in the afternoon & she talked more about politics than usual – asked me about the Convention and seemed interested to hear about it, and when I said the crowd agreed with the executive too much, thought it natural, & when I said how much talk there was about comparatively unimportant things like bishops’ letters, she said that was the way everywhere, & very so in yearly meetings.

Tuesday 19th Nov. – The F.L.S. began this day, with a lecture on Horace by Grace Bell, and I went to help getting the tea. I  Katie was responsible for it, and she & Etta and Edith Bell were down there too. The latter sympathised warmly with Katie’s care of the soldiers at the Central Hall. There was a new

stove upstairs instead of a fire, & it didn’t burn well at all. The annual business came on, & there was quite a discussion over the rule against politics & religion, because Tom had [Superscript: made a gentle remonstrance against it] in his report. Sam Bell wanted it repealed, and Katie, and Edith White made an eloquent speech against it, in which she deplored the frightful lack of social life in Waterford, though in looking back, the connection between the 2 is not clear. I think it was that the F.L.S. is not attractive to the young because its stodgy & does not discuss vital modern problems Robert White thought it wd be better to leave things as they are, & so did Edwin & somebody else. There were the usual efforts to get young people – Chapman & such – on the committee, & Edith Jacob (who was wearing a big Union Jack) said she had never been able to get Reg Chapman to do anything when she was secretary, & others said very sensibly that it was no use putting young

people who had never shown interest in the society on the committee. The lecture was long & rather dull. Horace was evidently a very conventional person & rather a snob.

Thursday 21st Nov. – I went to the club in the morning & afternoon, & found that Whittle wanted me to go to Dublin on errands by the 6.30 am train next day. So I went down to the hotel in the evening & slept there. Tash was very anxious to go to Dublin instead of me. Kitty was home again.

Friday 22 Nov. – I went off in the dark, having seen no one but Minnie the maid, and daylight didn’t appear till near Cille Cainnig. At least I could barely make out the island in the river at Thomastown. I went first to Whelan’s & paid for a lot of badges to be made, then to

the Irish photo engraving company at in Middle Abbey St, for the block of Meagher, which wasn’t ready, then to Harcourt St where I saw James O’Meara [sp. ?] & Nancy Power, the latter being in charge of meetings. We wanted a speaker for Sunday, but didn’t succeed in getting one. Then I had to get some leaflets that had been printed for us, but I didn’t realise that they were ordered, or that they were so terrible contraband, so I didn’t succeed in getting them, being no conspirator. I went back & enquired about it at Harcourt St but they said they cd be got nowhere. Then I went out to Maxwell Rd and dined with Aunt Nannie & Aunt Isabella. They were surprised to see me, but willing to give me dinner, which is consisted partly of a sort of lentil pottage with golden syrup in it. They showed me a set of cards for some games that Aunt H, made long ago, all flowers & birds & insects, with child fairies in each, & some

wd were lovely; but the fairies’ eyes were too big, & their faces generally rather badly proportioned, in an irritatingly conventional style. I visited Deborah after dinner & found two Ballinabarna Pooles visiting her. After I came back Mrs Shackleton & Maggie came to visit at Maxwell Rd, & Mrs S. talked about someone who claimed to be both a Sinn Feinidhe & a pacificist & couldn’t imagine how that cd be. I said it cd, and Aunt Isabella said she was glad to hear it. I went & got the block on my way to the train, & had a very dull journey down; the light wasn’t good enough to read Peveril of the Peak till I was past Cille Cainnig. T met me at the station.

Saturday 23rd. – Down at the club most of the day, & found out what a fool I had been at the printing works.

in the afternoon. I went to the Club in the evening.