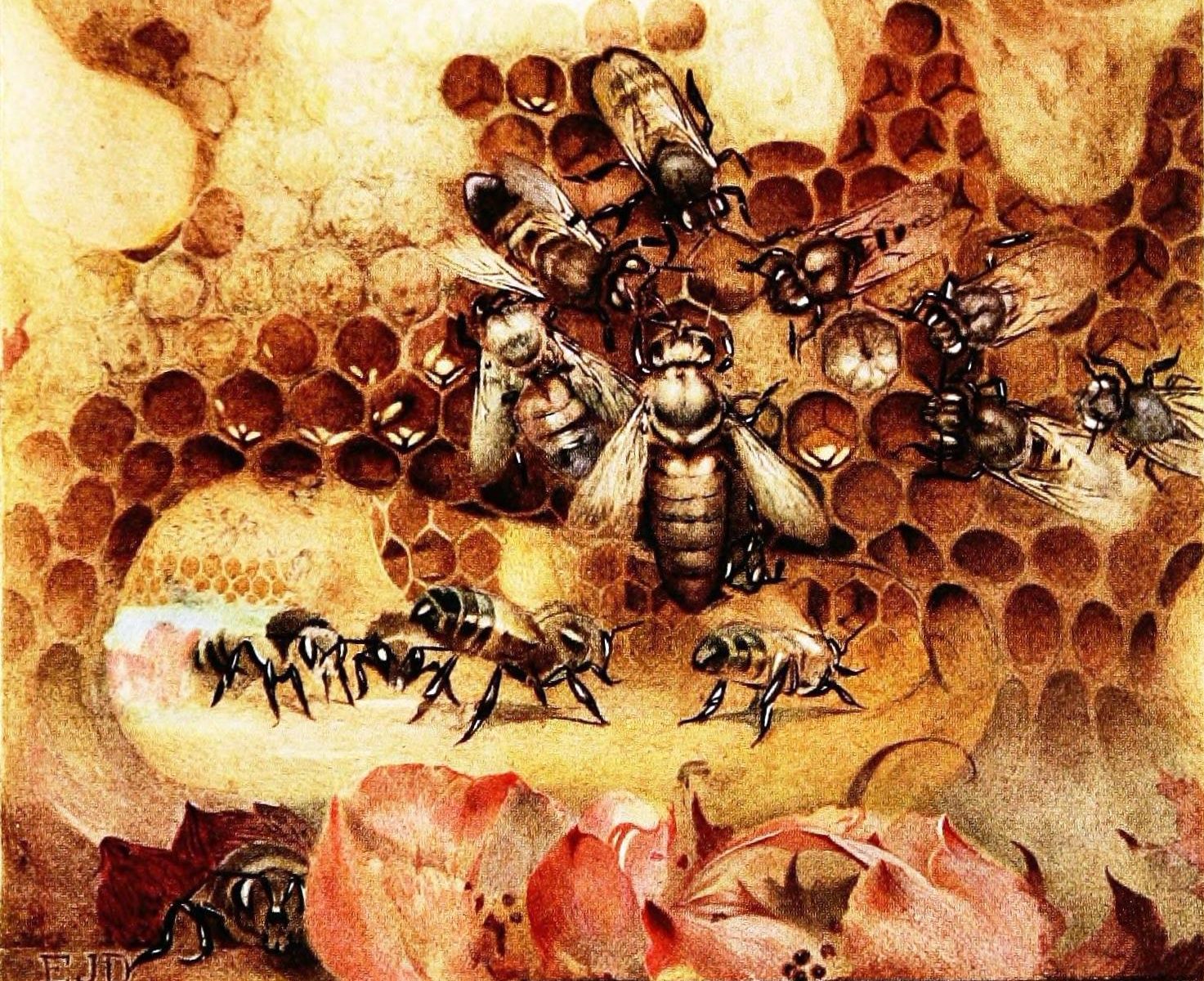 “There were a few flags out along Lower Newtown, but when we went up Newtown Rd among all the Unionist houses we only saw one all the way. D. and Tony & Louis & I went out as far as Power’s Nursery hill & sat on the wall there & saw thousands of motors & other vehicles go by picnickers I suppose. It was a fine warm day but cloudy. Tony is a model at rolling the pram. We spent the afternoon picking fruit & weeding, & got a short game of casino after tea. I moved to Suirview in the motor as it was taking Tony to the station.”

Monday 14th. – I went to the hotel in the afternoon & had tea with Kitty, Tash has gone to Rinn in her place. Kitty was more cheerful than usual and looked very well.

Tuesday 15 July. – A grand hot day. I went to Tráith Mór a.d. to visit Midvale and had tea there. Uncle Charlie was in the summer house as usual, with a book, & the bees were flying about rather angry, because they had been raking in the honey the previous evening, & Marguerite seemed to me more frightened of them

than was necessary. She had very fine eyes, but her features are nothing much. Charlie was working over the bees some way; he is very expert about them. They showed me gallons of honey in a thing like an iron boiler in the hall, & the machine that turns round & flicks it out of the sections, leaving them intact, but they didn’t give me any for tea, to my intense disappointment. I was helping Jessie to pick strawberries afterwards, & eating them, & they’re not half as nice as Tom’s. It seems she teaches Marguerite herself now, on the Parents’ Union system of books. She says Miss Linton’s baby is extremely lovely, and that she was in very bad health a long time before & after he was born, & Ernest was very good. Wonderful how these horrid children improve in later life, & he doesn’t look at all estimable now.

Wednesday 16th. – Still very hot. I visited the carstand Powers a.d. Tom & I went to see the Shuttle at the Broad St cinema in the evening. It was fairly good, but Sir Nigel was dark & plump & American looking, not a bit like himself.

Betty had a complete masculine riding suit that became her very well only for the silly way her hair was done, & the last scene was better done than I expected. Mount whats his name was very good-looking; not the usual cinema man at all, tho’ he had a big chin. There was an adventure of Mutt & Jeff with a tank in the war that was killing, & a bit of a serial, & some travel pictures of Cuba etc, including a couple of very interesting ones of fish swimming in the sea – big jelly fish etc. We went for a walk up to the top of Grange hill afterwards. Tom is able to sit up nearly till midnight & yet be down in

proper time next morning. He ascribes it to Louis’s early habits.

Thursday 19 July. – Eileen & Hilda were giving the tea at the tennis club this afternoon & I went to help. They took the tea up in an old pram, & we sat watching the games for a while before we went to work. Eileen won the doubles tournament lately with Charlie Fudger & “I’m glad, Rosie, because it vexed them so much.” She considers they – the ruling set of Fudgers, Coades & Crokers – always behaved badly to her & others. Ruth Croker & Billy Fudger seemed to me at first the only good looking people there, but I didn’t much like either of their faces. Afterwards I saw Dorrie Coade in a blue gown, with her hair up, looking very handsome & nice and unconscious & decent unlike any of the others who all seemed to have a sort of affectation about them. We got tea

ready with the help of Miss Higgins, & I went home at 6 when the eating had just begun. I enjoyed it very much, I always enjoy Eileen & Hilda’s company, & I like to took at tennis though I wasn’t much impressed with the quality of the play I was reading a life of the Marquis de Pombal, belonging to Tony, at this time. It was interesting & Pombal was a great piece of luck for the country, but I have a feeling that there may have been something to be said on the Jesuits side all the same. I should like to know more about their monstrous principles.

Friday 18 July. – A letter from D. to say she was coming back by the Rosslare train that night. Tom went to meet her & Emily at once came into the parlour & stood talking to me until they came back. Her talk was all about her family, &

very entertaining. Tony was the party when they came back, and stayed the night on his way to arrive at the mining school in Cornwall on Monday. He thought Uncle Stephen looking bad, & Aunt B. just the same as ever and seemed rather depressed, at leaving to go off again just when he had got home, I think. Louis was wide awake & very good. D. says Stephen had never had time to get over the influenza he had, & looks emaciated. Its scandalous the way he is treated regarding holidays.

Saturday 19 July. – There were a few flags out along Lower Newtown, but when we went up Newtown Rd among all the Unionist houses we only saw one all the way. D. and Tony & Louis & I went out as far as Power’s Nursery hill & sat on the wall there & saw thousands of motors & other vehicles go by picnickers I suppose. It was a fine warm day but cloudy. Tony is a model

at rolling the pram. We spent the afternoon picking fruit & weeding, & got a short game of casino after tea. I moved to Suirview in the motor as it was taking Tony to the station.

Sunday 20. – I visited at St Declan’s a.d. & heard about Ben & Charlie Murphy. Everyone says Ben is a reasonable being out of Cork, but in Cork he exists only for C.M. There was a committee at the club a.8., and at the end of it J.D. Walsh & J. Wylie bought up some nonsense about members being displeased because the president had voted against the increase of wages to corporation labourers. It seems a capitalist crime for a Sinn Féiner of any prominence to vote contrary to Labour in anything – & it was also shocking for him. Alderman Power – to oppose anything supported by another officer of the club, that being J. Wylie. This seemed to me a fine specimen of insolence. Mr Power took

it very calmly, conceiving that he had a right to vote on the corporation according to his own judgement even if he was president of the club. It was very low the way J. D. W. and Wylie kept on saying that members of the club saying so & so, instead of giving their own opinions.