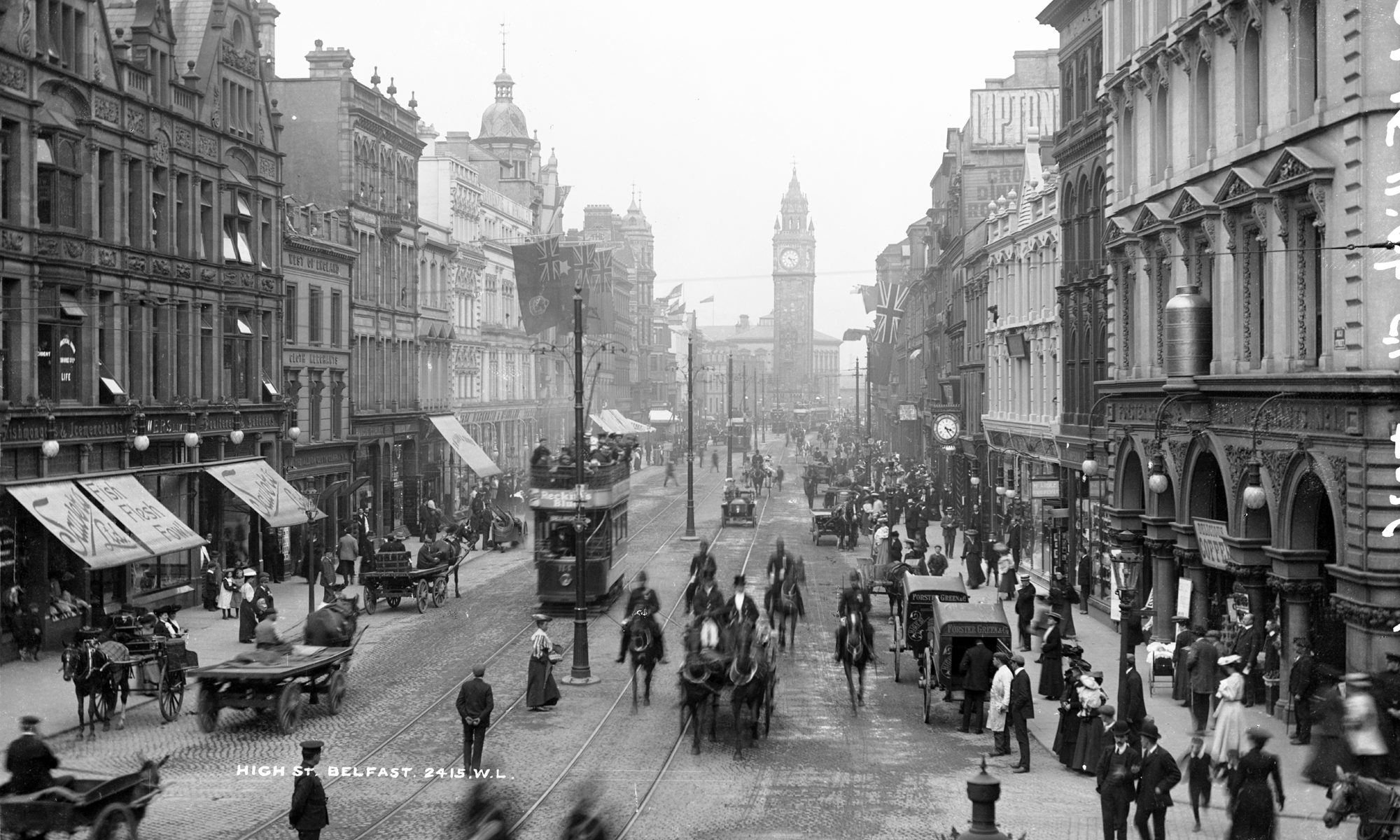 Monday 22 Sept. – Damp morning. Nina & I travelled to Át Cliat – a beastly crowded train from Port Laoire on – and I was fortunate enough to have the company of a girl she knew who was

travelling to Belfast, & who shared a car with me from Kingsbridge to Amiens St. The train there was frightfully crowded too, & a lot of noisy soldiers with bottles were added to it at Dún Dealgan. There were some lovely mountains past halfway, but I couldn’t find out what they were. Bessie & Nancy & Bob were all at the station in Belfast, the 2 latter to receive their cradle which I was very glad to be rid of. Bessie had her baby with her, prettier & nicer looking than she was. We went in a tram out the Antrim Road – the streets looked a good deal like Dublin and Kathy the maid met us with a pram of Chichester park. Blanfern is a nice house, with rather small rooms, but with lovely pantries & more storage room than most modern houses. Aubrey turned out not much to look

at but pleasant and friendly & not a bit shy – nicer than I had expected. The baby was having trouble with her teeth and wouldn’t go to sleep till after 9. Bessie looks thin but very pretty & in good spirits.

Tuesday 23rd. – We took the baby out around the adjacent roads in the morning red brick suburbs much like Át Cliat. An elderly woman named Goodchild whom Bessie is very kind to paid a visit in the afternoon & evening – she paints & touches up photographs, & used to know Miss Bowman. I called Norah Glynn, next door but one, who is going out to India on the mission tack in October, and met her mother, who attracted me greatly. Lizzie Glynn from Inis Cortad [Enniscorthy] was there too, & they have a grand cat called Barney. Aubrey went away travelling this day.

Wednesday 24th. – We (including the baby) visited a friend of Bessie’s named Olive Crawford, who was going to be married the next day, & was exhibiting her presents to visitors. Some of them were gorgeous. She rather reminded me of Maud White, though much slimmer. Her mother was rather nice, but the baby didn’t like her.

Thursday 25th. – Bessie & I, without the baby for once, went down town to Olive Crawford’s wedding in a Presbyterian church. There was a large audience but no bridesmaid’s [Superscript: flowers, music, or grand dresses], & the principals with the best man & one bridesmaid, had to wait five minutes before the clergyman came out to them. Bessie was much pleased with the little “personal talk” he gave them – it seemed to me awful to be exposed to good advice from a stranger on such an occasion.

Olive had a lovely creamy or ecru gown. The bridegroom didn’t look much. The service was fair & reasonable, the same for each, & short, but had a disgusting preamble. After dinner Nancy came to visit and Bessie’s neighbour Mrs Boal came in also – a dull Englishwoman. We talked about the wedding & Nancy expressed abhorrence of a personal talk from a minister & told how she had given him instructions the night before, which shocked Bessie – she thought it great impudence, especially from one so young. The baby was there all the time, & Nancy took hardly any notice of it & said nothing complimentary, which of course displeased Bessie,who criticized Nancy severly after she was gone. She objects to her coolness & lack of anything like cordiality or pleasant gracious-

-ness, & the instructed minister stuck in her throat for a long time. She talked of it to Aubrey when he came home in the evening, but he was non-committal. She seems not to object to “obey” either, though she so much admires the Quaker service form.

Friday 26th. – Fine day. I went to visit Cousin Anna in the afternoon & found my way to Tramore all right. It’s a nice house but very upset then. Edie Waring was there and a Mrs [extended blank space] was staying there too, but she was out. They gave me tea & Cousin Anna gave me my pick of a lot of books they she wanted to get rid of, so I took two small ones on Voltaire and Scott. Then I made my way to Nancy’s place at Ormeau Road, and found her commencing to get the tea. Nancy had on her wedding

dress again – says it is the only one she can wear. It is very pretty and becoming. Bob came in after a while and built the fire, and when the kettle boiled we had tea. Bob asked me if I had noticed the Uls Belfast accent – he hasn’t it himself, had a very quiet diffident gentle voice, and altogether gives the impression of the being the most retiring and unselfish creature possible. His right arm is a great deal better, but he is suffering rather from his eyes. After tea we sat at the fire & Nancy talked about golf – they seemed to understand & partly share my feeling against it as a rich man’s game & a game that pl people play who ought to have got beyond games – but I cannot approve of the practice of the children at Harbour View of keeping or selling all the golf balls they could find. They have a rather

nice fair sized room & a little one that Nancy has to use as a kitchen, & all the water has to be carried up from below.

Saturday 27th. – Fine day. We heard of the English railway strike. I took the baby out in the pram in the morning, & in the evening Aubrey minded her while we went to the nearest cinema & saw “Nan of Music Mountain” – a most absorbing yearn about American mountain outlaws & a noble young gorment officer that put them down – full of horses & fighting & climbing & grand mountains & woods, great stuff, but it bored Bessie. The hero’s name was Henry de Spain. There was a baby show, which Bessie was quite enthusiastic over, & Little Dorrit, which was piffle.

Sunday 28th. – A brilliant fine day. Owing to a mistake about summer time we got up too late to go to meeting, so went for a walk instead

over to Cliftonville and round country roads there. There were lovely views of Cave Hill and the city. Aubrey rolled the pram a good part of the way. In the afternoon Edward Glynn, Norah’s father paid a visit & had tea with us. He struck me as an exceptionally nice man. He & Bessie had a discussion about conversion & original sin, which he doesn’t believe in, though he seems very religious, & he treated her exactly as an equal, which very few middle aged men would do, even offering talking to her almost with diffidence, Aubrey was kind of neutral. He & E.G. & I went to a sort of little informal evening meeting at a Friend’s house in the neighbourhood then, & the conversion argument was continued most of the way. When A. & I came back we found Mrs Harding & her little Mrs Glynn was there, & walked home with me, talking of the suppression of the Sinn Fein papers.

daughter Joy visiting Bessie. Bessie was telling me a lot about Aubrey’s brother later when he had gone home with his mother, there are 9 of them, & 4 were at the war.