“I went into Dublin in the evening to the I.W.F.L. to read Shaw’s views on parents & children for them to discuss. There was a good attendance, but of course they did not discuss the things I wanted them to, but went off on education, which I had carefully left out. Mr Bridgeman ascribed to Shaw extraordinary aims about taking all children away from their parents & bringing them up in institutions. “

Monday 27th Oct. – I had a sore throat and stayed in bed till the afternoon. Lucy & Mary used to come in & look at

me and discuss me and say I was anemic and should take iron. They disapproved of my intention of living with Hanna; did not think she was likely to take proper care of me, & evidently thought me foolish not to stop in Waterford. Lucy used to be interested to hear about Hanna, though. I went into Dublin in the evening to the I.W.F.L. to read Shaw’s views on parents & children for them to discuss. There was a good attendance, but of course they did not discuss the things I wanted them to, but went off on education, which I had carefully left out. Mr Bridgeman ascribed to Shaw extraordinary notions aims about taking all children away from their parents & bringing them up in institutions. Hanna was in the chair, and was very eager to get my personal views on parents & children. I had to go very early to get

back to Deilginy [sp.?] before 11, and Lucy & Mary were both interested to hear about the evening.

Tuesday 28th. – Lucy had a sore throat & pains in her bones and was in bed all day. I was allowed to visit her in the afternoon. I visited Mrs Somers between tea & dinner, for a little while, in the shop. Lucy is a wonderfully satisfactory person to tell anything personal experiences to, she is so amused & so responsive.

Wednesday 29th. – Still very cold and Lucy not much better. I paid her several visits though her room was freezing, and she asked me to tell her all about Dorothea’s family, so I was very fluent, and she was very interested and satisfactory. I visited the Somerses again & had tea there. Charlie was there, as solemn as ever, with deep lines in his

cheeks. He brought in the cat to me but she wouldn’t stay.

Thursday 30th – I went back to At Cliath in the morning and dined at Garville Road with Constance Haughton, but D.W. was in bed with after one of her seizures and I didn’t see her. I visited my aunts in the afternoon and had tea at home with Owen, and went to the Hermetic Society’s meeting in Harcourt St afterwards on Mrs Connery’s invitation. Her husband, a Miss Maxwell, Sears of Inis Cortaid [Ennishcorthy] and I were all the company till Russell came in – a very big man with a beard & an ugly good natured face, & he began to expound a very prized little book of ancient Indian writings to us, about concentration & mediation & how you should begin by concentrating on something that

you love. Sears hold the view that the monastic life is the best & the world is all ashes & vanity. I liked Russell very much though he is so loquacious – I saw no sign of egotism in him, and he tried to get the others to talk.

Friday 31st, Oiche Samna. – I went to town in the morning on various errands and found people selling flags for a war memorial everywhere, and Union Jacks hanging out. After dinner I visited Florrie Webb but she was not very genial & when I said I was told I should hear Dermot sing, she gave no encouragement whatever to the idea. I had tea at Maxwell Road and went on to hear Brailsford lecture at the Women’s International on the League of Nations. There was a good crowd, including Arthur Webb, Miss

Scarlett, Frank & Ned & Lily Stephens, the Normans, the Oldhams (he was very full of remarks & questions to Brailsford) & Cecil Watson, whose profile was a great help to me, & his sister Edith, who looks pleasant but not half as refined or interesting. Brailsford is an ugly little man but spoke very well – actually said you when he meant us, and gave a frightful description of the League as at present constituted; how it is just an arrangement to consolidate the control of the world in the hands of the Allies, and nothing whatever can be done according to its constitution unless they at least are unanimous about it, & no subject nation can be attended to unless one of them is willing to make it a casus belli. Ned invited H. & me to afternoon tea on Sunday to meet Brailsford. She & I walked home in the rain. She takes no stock whatever in November Eve. 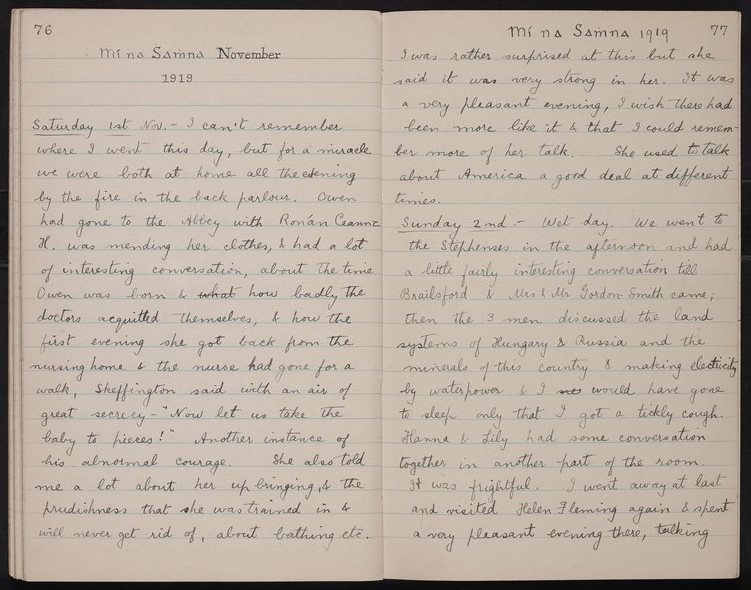 Saturday 1st Nov. – I can’t remember where I went this day, but for a miracle were both at home all the evening by the fire in the back parlour. Owen had gone to the Abbey with Ronán Ceannt. H. was mending her clothes, & had a lot of interesting conversation, about the time Owen was born & what how badly the doctors acquitted themselves, & how the first evening she got back from the nursing home & the nurse had gone for a walk, Skeffington said with an air of great secrecy – “Now let us take the baby to pieces!” Another instance of his abnormal courage. She also told me a lot about her upbringing, & the prudishness that she was trained in & will never get rid of, about bathing etc.

I was rather surprised at this but she said it was very strong in her. It was a very pleasant evening, I wish there had been more like it & that I could remember more of her talk. She used to talk about America a good deal at different times.

Sunday 2nd. – Wet day. We went to the Stephenses in the afternoon and had a little fairly interesting conversation till Brailsford & Mrs & Mr Gordon-Smith came; then the 3 men discussed the land systems of Hungary & Russia and the minerals of this country & making electricity by waterpower & I would have gone to sleep only that I got a tickly cough. Hanna & Lily had some conversation together in another part of the room. It was frightful. I went away at last and visited Helen Fleming again & spent a very pleasant evening there, talking

about Oscar Wilde’s poetry which she is reading, and about Macaulay’s Days which she knows fairly well, expect the Prophecy of Capys, and about Idylls of the King and Malory’s Morte d’Arthur. I don’t know how we got to the last but I was telling her about it – she does not know it much, and dislikes Launcelot in Tennyson. I know we were talking about Elaine that boiled in scalding water. It was most refreshing after the afternoon. Helen asked me to go for a walk with her the next Saturday.