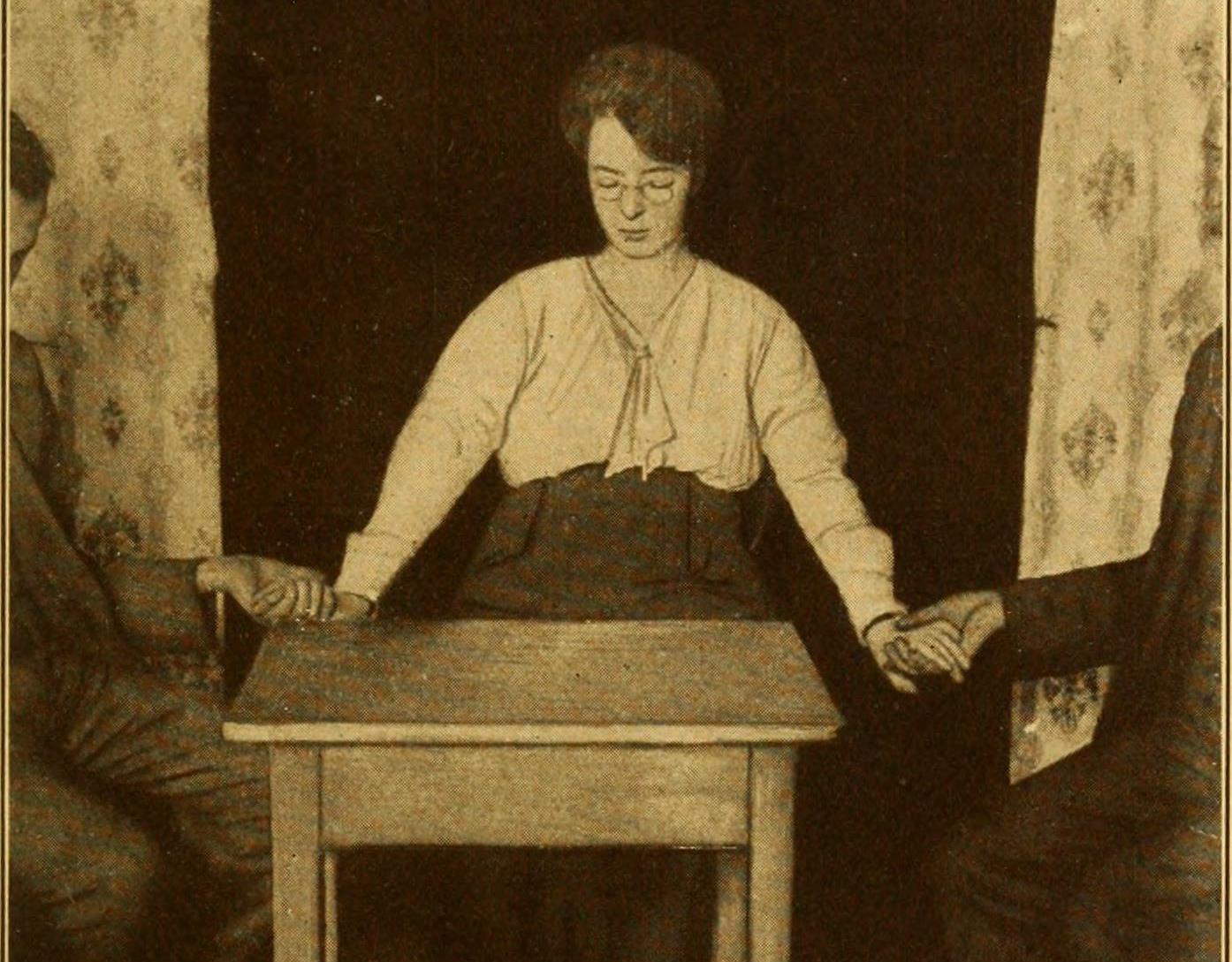 “Mrs Coade came to visit us in the afternoon, and was very interested in automatic writing. She never does it since an experience she had of a dark & miserable spirit writing through her & wanting relief, which she was able to give it through prayer. She read Hanna’s handwriting & gave a pretty true account of her – said she was very sensitive really & easily hurt but was able to conceal it.”

Monday 24th. – Mrs Coade came to visit us in the afternoon, and was very interested in automatic writing. She never does it since an experience she had of a dark & miserable spirit

writing through her & wanting relief, which she was able to give it through prayer. She read Hanna’s handwriting & gave a pretty true account of her – said she was very sensitive really & easily hurt but was able to conceal it. I went to tea to I.J. & Edith Bell, and they or rather he talked about history, & they said Newman was farming with John O’Neill of Torngas – not very good company for him I should think – & I.J. B. talked about Ellen Key & showed me extracts from her – one very good one where she said that however people may alter & disguise themselves in other parts of their life, the way they love – sexually – will be themselves in the clearest form – the essence of themselves. It was a pouring wet night.

(109) Bell in the afternoon. Ruth is very big & is a little nearer to talking than she was. There was an essay meeting that night – Mr Hambrey on Signs of the Times, which turned out to be materialistic influences of the 19th century which were bearing their fruit now in the doctrine of might makes might & Marxism socialism. He gave a most unfair impression that the utilitarian system of morality had tended towards this, & described it in a most distorted style which probably pleased his audience. He also spoke of the Manchester free-trade school as materialists, & seemed to impute most of the evils of industrialism to them. His view of a materialist was a person who believes in nothing beyond matter & therefore apparently, in no moral principles.

(110) There was a lot of discussion, Tom criticised him very well, & Mr Walpole of course spoke at great length, & Mrs Warner gave a few pious words.

Wednesday 26th. – I minded Louis for a while at St Declan’s, & put him to sleep twice, but he wouldn’t stay so when he was put in bed, and stayed to tea.

Thursday 27th. – I went to the Town Hall in the afternoon to help prepare food for the social, but by the time they got to that I was nearly ready to go home. A Mrs Phelan of Blackfriars, Mrs O’Shaughnessy, Mrs Foley (who is going to stand for the corporation) Mrs Hayden & one or two others were there. They got the council chamber looking very nice, with shrubs & flowers, and busts from the Technical school, arranged by boys under the direction

(111) of Mrs O’Shaughnessy, who seemed very capable at ordering them about. Aunt H. and I went down in the evening and spent a very dull time. The people sat round in groups & we hardly got speaking to anyone. D. had on her embroidered national costume which looked lovely except that the skirt is not quite full enough. Tom conducted a model election, on P.R. lines, and there was some delicious music, Miss Leighton & Mrs Williams & D. singing to Mrs O’S.’s accompaniment. There was a little dancing later on & I waltzed with Mrs Ryan but she was no great things. Miss Leighton made a very good speech, explaining the origin, aims, & non political nature of the W.C.A. Some people have fixed it in their minds, it appears – that it is a Sinn Fein body.

(112) Friday 28th. – Tech in the morning, & in the afternoon I went over to St Declan’s to show D. the report I had written of the social. It was that afternoon that she showed an interest in the automatic writing & asked a lot of questions about it. I could hardly do it at all these days, not being very well. Louis was much interested in me bouncing a ball, & after tea had a great time hustling about the room with nothing on but his vest. He got about with great rapidity and was delighted to have clothes off.

Saturday 29th Nov. – I went to town in the morning & on the way back visited the Carstand Powers. They could tell me nothing of the Club except that it is sinking to a low level, & in common with Sinn Fein everywhere else

(113) has sold its soul to Labour without getting any adequate return. An anti-Redmond song at a labour concert here lately was hissed off the stage, they say. Alderman Power allowed his name to be kept on as “honorary president”, after a lot of entreaty, but never goes there. I applauded his habit of not taking offence or standing on his dignity, & of discouraging others from doing so, & they said he was a door mat, & that their policy would always be to encourage a fight. They told of an unfortunate occasion in the Corporation when he prevented Hackett, then mayor, & Hyland, from mutual assault, which certainly was a pity.

Sunday 30th. – Wet. Aunt H. & I went to St Declan’s in the afternoon. Louis can stand holding to a hand now, but won’t do it much; doesn’t seem to trust hands.