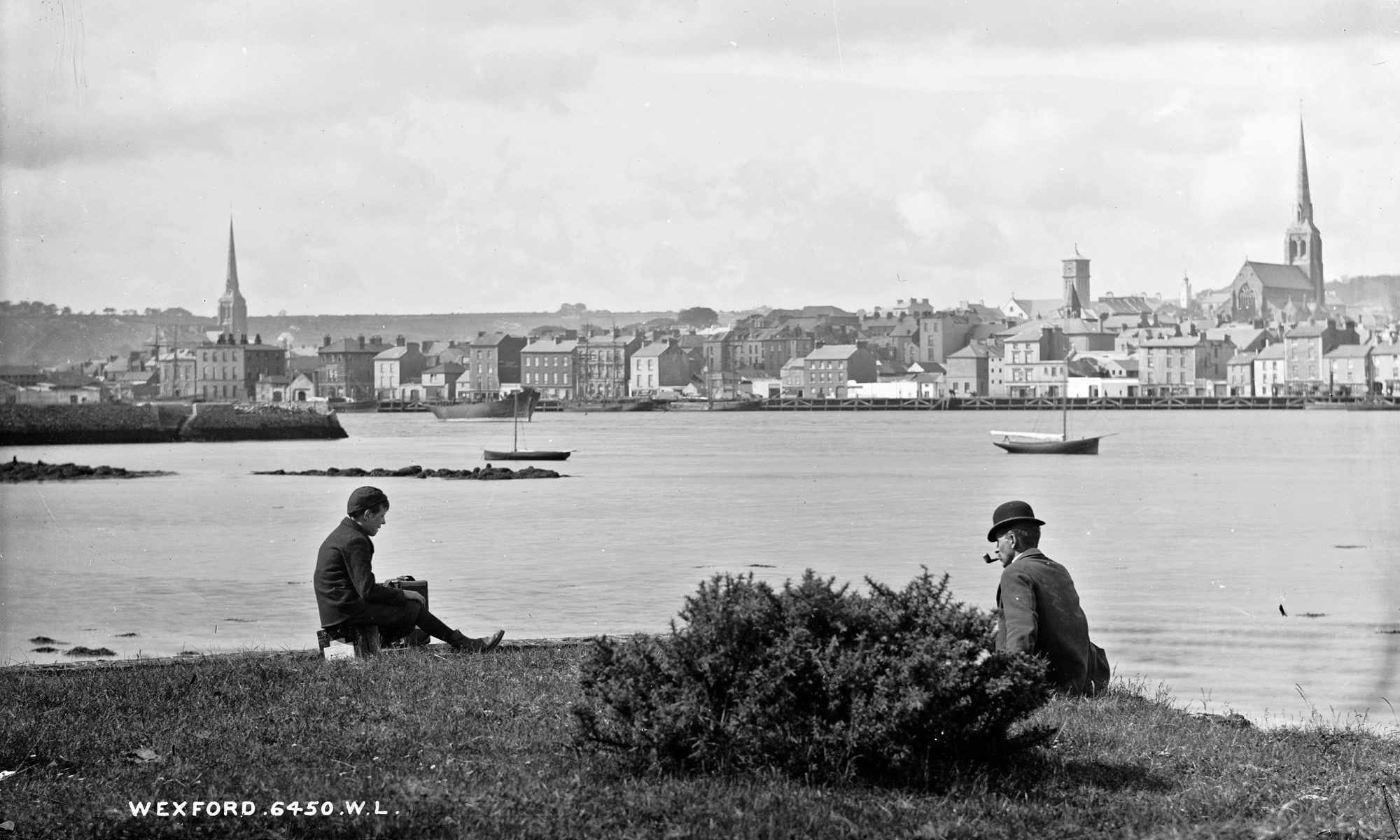 “Thunder & lightening & fearful rain last night. I had a cold somehow, I didn’t go out. The news of the murder of Alan Bell was in this day’s paper – the worst yet, of course, much worse than common policemen. It was the first piece of agreeable news for a long time. It is wonderful that it could be done so openly with no danger of interference.”

Monday 22nd. – Nice day. The lawn is full of sheep and young lambs, and Miss B. had a lot of work attending to them. After tea, about 4.30, Aunt M. & I went to the forge, with black Dolly to get new shoes on her, & while the smith was doing that we went a little further along the road to visit Mrs Timpson. They live opposite the Walkers’ place, and their front field is full of Mr Walker’s sheep & lambs. Mrs T. was in the garden, digging, & her daughter Oreen, aged 11 or so, was in the house but came out with a very sprightly little brown dog, always referred to as he but really

female, and picked white violets for me. She was very friendly & pleasant, and had never before seen the paintbrush in a periwinkle. We went into the house presently & had tea, & saw Punch’s sister Judy, and Mr Timspson, and elderly, very far from goodlooking man, told Aunt M. how M’Curtain was killed by Sinn Féiners because he had informed on them, like Carey.

It was a pretty place round there, & a lovely little well near the road a few yards from their gate.

Tuesday 23rd. – Fine day but somehow or other I feel dead tired all the time. Aunt M. & Mr Byron spent a good part of the day in Wexford, and Miss B. & I cut the grass on the golf course & she told me stories about dogs & shop. I went for a walk out the lane across the stream a.d., it was muddy but getting very pretty with primroses & firze, though

nothing to what it was last May. This is an early spring. I read a lot of novels these days, but none remarkable. A lovely little puppy, a black collie with a good deal of white on him, arrived on Monday by purchase & train. He was too young to leave his mother, but he flourished & developed very fast. He was named Watch. Miss B. thinks it wrong to call animals by any Christian names.

Thursday 25th. – Pouring wet day till about 3 or after. We had been asked to visit at a place called Tullibards near Bridgetown, but had nearly given up hope of getting there at all when it cleared up at last. We had the big gray pony, so as to lose no time, and Tommy to drive her, and Tommy has a very handsome profile. It was a fine wild cloudy sky, but very cold driving. The family at

Tullibards are two Miss Taylors – a brother lives there too but he wasn’t there – & their sister Mrs Grant & a daughter of hers aged 15 were visiting there. Susan Taylor was mild & quiet, very fond of her cats & dogs & pleased to have me show interest in them, & Nora Taylor was a tall thin rather good looking woman with grand high brown boots, a demobilised Red Cross nurse, very lively and talkative and full of devilment as nurses so frequently are. She was abusing Sinn Féiners a good part of the time, & showing us a green & yellowish jumper she had bought lately in Dublin & couldn’t wear because she now perceived that anything white near it would make it into the Sinn Féin colours. Mrs Grant was dark & solid and rather nice, with a gruff voice. They brought a fire in to the parlour in shovelfuls, and the chimney smoked. After

tea they showed us the back kitchen, which is a very primeval place with a big wide chimney & a pot hanging over the fire, & a fan wheel. They had lovely dogs, and the yard & outhouses were alive with cats. Aunt M. praised my self control when Nora was talking about Sinn Féiners, which pleased me very much. There was a lovely new moon when we were coming home.

These county Episcopalians are nearly more different from Quakers than they wd be from Catholics. Their rooms, their talk, everything is utterly unlike, more happy go lucky & thoughtless and worldly, & less civilized somehow.

Friday 26th. – Mrs Timpson came to afternoon tea, but Oreen had a cold & couldn’t come, the weather being bad. She had knitting that she wanted Aunt Maggie to help her with, & the con-

-versation was chiefly on that, but al except when Mrs T. was repeated the story about M’Curtain being shot as an informer. When people live wholly on the Irish Times, you can hardly be surprised at anything they believe. It hadn’t a word in it of the evidence at the inquest in Át Cliat on the 2 people the soldiers killed on Monday night, only a short report of the occurrence in which the crowd appeared as the aggressors. Mr Byron used to talk about the nursing home in Dublin sometimes, but he was quieter than usual, and used to spend a good part of the evenings read novels by Nat Gould, provided for him by an ex-solider to whom Polly is engaged. Aunt M. told me she remarked to Polly that they should not be afraid of raids here, having a soldier in the house every evening to protect them, but Polly’s reply was “Ah musha, the

Saturday 27th. – Thunder & lightening & fearful rain last night. I had a cold somehow, I didn’t go out. The news of the murder of Alan Bell was in this day’s paper – the worst yet, of course, much worse than common policemen. It was the first piece of agreeable news for a long time. It is wonderful that it could be done so openly with no danger of interference.

Sunday 28th. – I was in bed most of the day with a bad head. I tried to read Captain Margaret, but it had great drawbacks through it was extraordinarily clever. I don’t think I could read anything Masefield wrote.