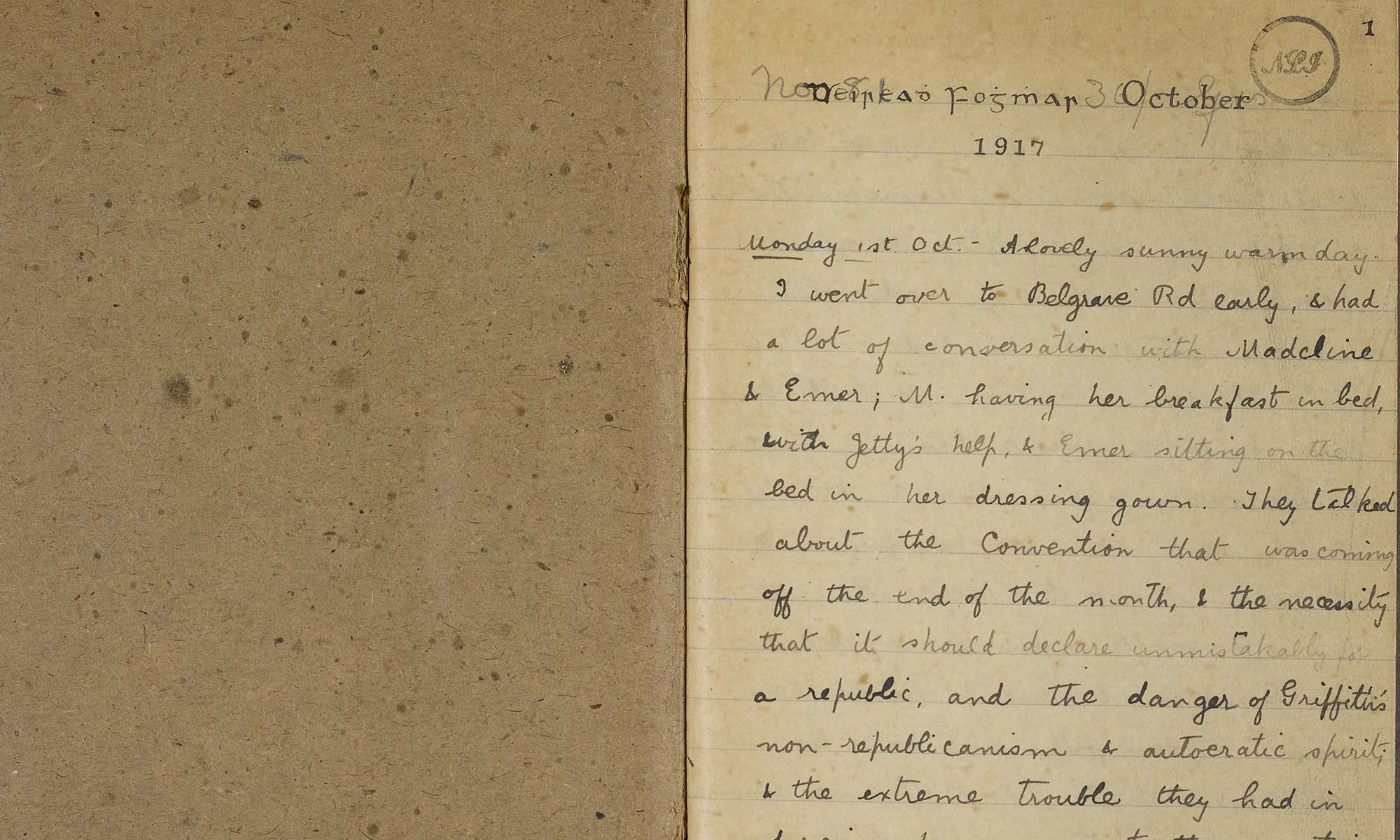 “They talked about the Convention that was coming off at the end of the month, & the necessity that it should declare unmistakeably for a republic, and the danger of Griffith’s non-republicanism & autocratic spirit; & the extreme trouble they had in forcing a woman onto the executive against the will of Griffith & Milroy etc”

Monday 1st Oct. – A lovely sunny warm day. I went over to Belgrave Rd early, & had a lot of conversation with Madeline and Emer; M. having her breakfast in bed, with Letty’s help, & Emer sitting on the bed in her dressing gown. They talked about the Convention that was coming off at the end of the month, & the necessity that it should declare unmistakeably for a republic, and the danger of Griffith‘s non-republicanism & autocratic spirit; & the extreme trouble they had in forcing a woman onto the executive against the will of Griffith & Milroy etc.

Then I went down town & met Mrs. H. M. at the Municipal picture gallery and we inspected the new pictures

(2) there which Douglas had been recommending to me. The one of the tragic looking Aran fishermen with the guns and the tricolor flag we admired keenly, but not the gaudy flat pictures upstairs. We went over the whole house & agreed very well in lack of proper artistic taste, & it was a blessing Douglas wasn’t there, he would have been horrified at us. I came back to Moyne Road for dinner, & after dinner cycled over to Brighton Square & visited them again. Mrs Hill. & I had tea early and went to the Rathmines cinema to see the pictures of Ashe’s funeral. They were interesting as far as they went; the coffin carried out of the    City Hall & the hearse starting, & then afterwards the burial, &

the volleys fired over the grave. Then there was a long French story, ending with the present war, & the hero defending a fort against the Germans and being killed. We went out to Belgrave Rd then, & had to wait a long time for Madeline to come home from a S. F. club meeting at Scoil Éanna.

Tuesday 2nd. – I came back to Inis Córthaid [Enniscorthy] by a morning train, arriving at Clonhaston just as they had finished lunch. There was a clergyman in the train who noticed my badge, & told me that politics were of no importance now because Christ is coming soon, & that is what really matters. I found the Admiral had only

gone the evening before, and Mamma had suffered a good deal from him. I developed a bad cold that afternoon.

Wednesday 3rd. – The cold was worse and I spent a very miserable day reading the Rocks of Valpré etc.

Thursday 4th. – We went home this day, by the afternoon train. I was sorry to part with Lucas; I used to sit in the kitchen with him, which he liked very much because he was never let in there alone, or hardly ever. The maids were very sound in their politics, but they didn’t appreciate him. Tom met us with the motor. There was a big Sinn Féin concert that night, to which everyone went except Mamma & me, but & it lasted till nearly 1 a.m. & was a huge success.

Friday 5th Oct. – I was worse, from travelling the day before, I suppose, but it was very nice to be able to stop in bed the whole day. Dorothea & Tom came to tea.

Sunday 7th Oct. – D. and T. came to dinner and tea and I forget what happened. Tom was talking about his 6 books evening for the F. L. S., and Mamma & I were choosing what 6 books we would write on.