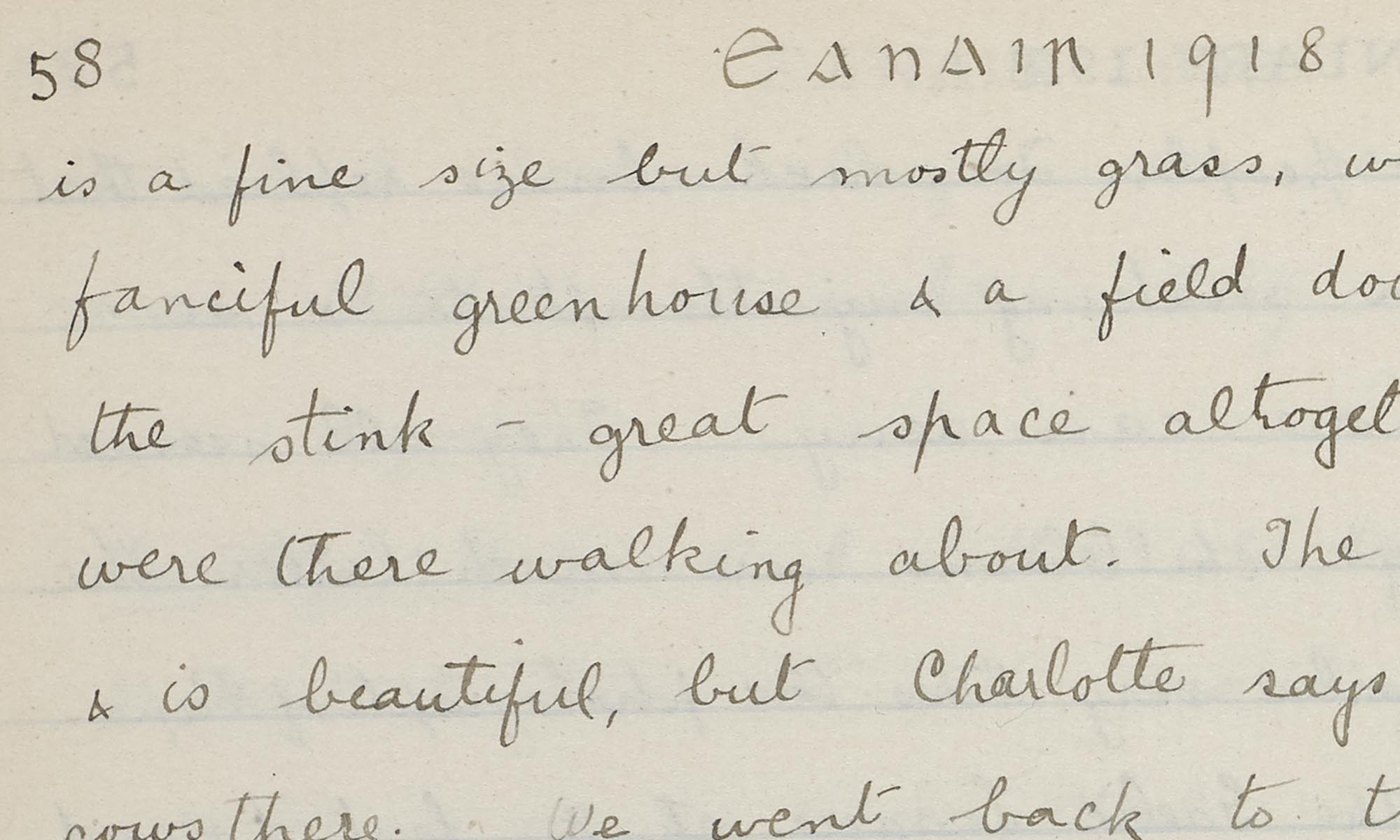 “I spoke of studying the policy, but M.N. said it was no use on Thursday evenings because of the dancing at the League, & the others did not contradict her. Then she began talking of the ceilidh, which she wasn’t at, & cursing the system of men only having the right to ask for a partner. She means to suggest at the Volunteer hall that at their dances men & women should ask each other alternately, dance about, & the other girls said they would back her up, but I don’t believe they will.”

Monday 7th Jan. – A bitter cold day with a vicious wind. I went to town in the morning & to Jennings e.d – more trying on. Uncle Charlie was to go to Dorothea next day for a while, Jessie not being ready for him yet.

Tuesday 8th. – I went out to visit R. Butler in the morning; she is troubled with her kidneys and her cat wasn’t there. Tom Fowler was though. I went to the hotel in the afternoon, & found that Mrs Whelan & John Paul had been there the previous week for some days. Tash had stories of Paddy Whelan stealing raisins & apples at home, yet she insists that he is a very good boy. Mrs P. told how she said to Annie the waitress the other day that there was one thing God Almighty couldn’t do –

he couldn’t please the people. To which Annie replied that she didn’t see him making any attempt to do so – which I think no one can deny. They all seemed pretty well, & Kitty’s chilblains were much better. She thought Uncle Charlie very like the photograph of Papa. She & I went to the Gaelic League at 8 but found no classes on. Mr Connolly was ill, but I don’t know why Wheeler couldn’t take his class. Some of the men were going to the Town Hall to decorate it for the next night.

Wednesday 9th Jan. – I went to the Tech in the morning & found Miss Whitty taking the plaster off her sister’s head, which certainly is an excellent likeness. I cut out a new brooch & put a middle in it & made 4 little curls of wire. In the afternoon I went to visit Charlotte at Newtown House, most of the family were spending the afternoon there. She took me over the ground floor & out into the garden, which

is a fine size but mostly grass, with a queer little fanciful greenhouse & a field down below bordering the stink – great space altogether. Mrs Jacob & Mabel were there walking about. The field has trees in it & is beautiful, but Charlotte says Fred proposes to keep cows there. We went back to the house & found a room upstairs prepared for tea, with a fire & rugs & chairs. Henry Bell, Anna, Rebecca, Janie, Charlotte, Sam & Grace (unexpected) with Sam Pim, Mrs Jacob & Mabel. Sam Pim had on a hideous dirty old disreputable khaki linen overcoat with a belt over his red cross uniform, but he is still handsome. Mrs J. said how well off we are to know nothing of the war here; no hardships except cutting off some luxuries that we don’t need. It’s a pity she’s not a poor woman, to see if its only luxuries. I asked Grace how was Chang, & was told they had “dispensed of her” because of some trouble between her & the baby

apparently – I wonder what it was. Charlotte was talking to me of Ned Stephens; she said very truly that with a person like that, full of universal Love & anxious to pour out his own ideas, you never feel that he’s talking to you yourself personally he’s just missionizing [sp.?]. Also she was amused at his admiration of Juliet White, & agreed when I said she used seem to me a very conventional person. In the evening T & I went to the Gaelic League ceilidh; some had satin shoes & one or two gloves. Mrs Power & Kitty were there; the latter in a very plain grey gown. The first dance was a Walls of Limerick; Mr Kearns danced with me. He dances well. Then there were a Rince Fada, a 16 hand reel and a Haste to the Wedding (new style, quite different from what it used to be) during which I sat out

continuously. May Rollerston & a young man danced steps; a girl sang Caitlin Ni Uallachain very well, & a young man named Keane sang Eamonn an Cuine beautifully. Then there was a Siege of Ennis which I danced with Joseph Power. It’s a very simple dance & rather nice. J.P. is a great man at ceilidhae now; he’s on the dance committee & very important. Then T & I went & got some supper (after a Waves of Tory which we danced together) & I secured a lot of crusts to bring home for the birds. Then we thought to dance a Bridge of Athlone, but it came on out of its place, where a Gigh Coal Cap was on the program, & began before we knew it was it. It was 12 then, as we came home. There was a Miss Cutler there, whom Mrs Power introduced to us, who is Mrs D Cutler’s daughter, & seems very earnest minded

Thursday 10th. – I went to see R. Butler & took her some milk. She was better, but still rather miserable.

In the evening I went down to the club to see what was going on, & found May New & 2 or 3 girls sitting round the fire. I spoke of studying the policy, but M.N. said it was no use on Thursday evenings because of the dancing at the League, & the others did not contradict her. Then she began talking of the ceilidh, which she wasn’t at, & cursing the system of men only having the right to ask for a partner. She means to suggest at the Volunteer hall that at their dances men & women should ask each other alternately, dance about, & the other girls said they would back her up, but I don’t believe they will. It’s strange how sensible she is in corners. I went up to St Declan’s then, thinking Uncle Charlie was leaving next day, but he wasn’t.

Friday 11th. – I went down to the Fianna Hall in the evening, following MacDonald’s request

from the girls there to be honorary president to them & preside at their committee meetings. We had a general meeting, about 12 or 14 girls; Ellie Robertson & a Browne the only ones I remembered. There was a secretary named Myler Quinn & a treasurer named Dalton, who both seemed nice girls. A male officer was there part of the time, & he intimated that I might come to the officer’s classes if I liked. They all learn drill & signalling & Irish & first aid. I found that the Fianna Council governs girls as well as boys, without the girls having any representation on it – they let themselves be called a ladies’ auxiliary, so what can they expect.

Saturday 12th. – I went to visit Grace Bell in the afternoon. Ruth has got very big and much fatter than she was, & she is not by any means pretty, but has a very friendly pleasant smile, & sat peaceably on my lap for a long time. She was extraordinarily interested in my hat. What hair

she has is red; she is not a bit like the name Ruth. She had lovely rattles, & dolls already. Grace had very interesting cookery books she was showing me, with beautiful pictures. She was wanting to know if hominy could be got here – it seems to be a preparation of Indian corn.

Sunday 13th.  Cold grey morning. It began to snow faintly about 1 o’ clock and went on with increasing strength. Mamma & I were both asked to dine at St Declan’s, but she didn’t go on account of the snow. Uncle Charlie objected to it greatly. Tom is still reading L’Isle des Pingouins. I visited the Walpoles on my way home about R. Butler & Smith’s monstrous bill which she denies owing; & I told them I heard Mr Armitage was not coming back to Newtown which dismayed Mrs W. greatly. “And I suppose that other good-for-nothing fellow is sure to come back”. Mettrick

conceited and full of crude ideas, according to him, and Armitage an admirable young man. They admire the Russian government very much, and are all for labour and socialist peace terms except Mr Bordle who was there. When I left it had nearly stopped snowing, having gone on quietly and steadily, without a breath of wind, for about four hours, and the snow was about three inches deep. The trees and bushes opposite St Declan’s were covered with it and looked exquisite. It was twilight when I went home, and the street lamp at the top of the hill made a lovely rich light on the smooth snow, and made it sparkle. As there was no wind all the leaves of bushes were piled with snow, and it was thick on the branches of trees.