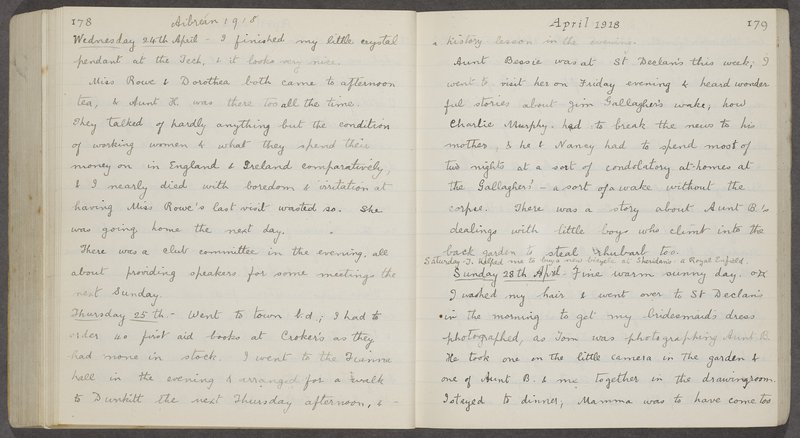 “There was another first aid meeting in the evening; Miss Connolly, who was to teach, came & told the girls what they were to bring. There was a Cumann na mBan branch being started at the Volunteer hall, with Mrs Power & Miss Doyle at the head of it.” 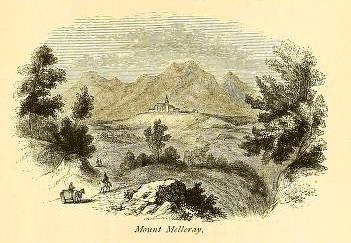 Monday 22nd April. – I went to visit Mrs Coade & Miss Rowe in the afternoon. Mrs C. was much better; Miss R. sat with me in the drawingroom for a while & we talked about Mt Melleray & Catholics, & I hope I satisfied her that the church does not benefit financially from thanksgiving to saints in the newspapers. She thought Melleray a very hard Spartan place to stop at. She took me up to see Mrs Coade who was in bed, but a great deal better, &

then we had tea together, and I entirely forget what we talked about, but I know she was very interesting.

Tuesday 23rd. – This was the day when all work was stopped & everyone signed the pledge to resist conscription. I Mamma & I went down to the club a.d. & signed it, & visited Eileen on the way back. She gave us tea, but could not find Darkey. I visited R. Butler in the morning, she was fairly well. She said one of the little Donovans had pneumonia and was in hospital. There was another first aid meeting in the evening; Miss Connolly, who was to teach, came & told the girls what they were to bring. There was a Cumann na mBan clas branch being started at the Volunteer hall, with Mrs Power & Miss Doyle at the head of it.

Wednesday 24th April. – I finished my little crystal pendant at the Tech, & it looks very nice. Miss Rowe & Dorothea both came to afternoon tea, & Aunt H. was there too all the time. They talked of hardly anything but the condition of working women & what they spend their money on in England & Ireland comparatively, & I nearly died with boredom & irritation at having Miss Rowe’s last visit wasted so. She was going home the next day. There was a club committee in the evening, all about providing speakers for some meetings the next Sunday.

Thursday 25th. – Went to town b.d; I had to order 40 first aid books at Croker’s as they had more in stock. I went to the Fianna hall in the evening & arranged for a walk to Drumkitt the next Thursday afternoon, &

a history lesson in the evening. Aunt Bessie was at St Declan’s this week, I went to visit her on Friday evening & heard wonderful stories about Jim Gallagher’s wake; how Charlie Murphy had to break the news to his mother & he & Nancy had to spend most of the two nights at a sort of condolatory at homes at the Gallaghers; – a sort of a wake without the corpse. There was a story about Aunt B’s dealings with little boys who climb into the back garden to steal rhubarb too. [Superscript: Saturday – T. helped me to buy a new bicycle at Sheridan’s Royal Enfield.]

Sunday 28th April. – Fine warm sunny day. [unclear shorthand text here]. I washed my hair & went over to St Declan’s in the morning to get my bridesmaid’s dress photographed, as Tom was photographing Aunt B. He took one on the little camera in the garden & one of Aunt B. & me together in the drawingroom. I stayed to dinner; Mamma was to have come too

but she wasn’t well. I went to the club committee in the evening; it was about meetings, & there was a complaint about the light conduct of a very young girl named Power – one of the sort that has no business in the club at all really. Miss Skeffington & I met her outside as were going away, and Miss S. spoke to her extremely well as I thought. She says the girl is rather a fool, & the other girls set her on & encourage her to misbehave, & the men are just as bad.