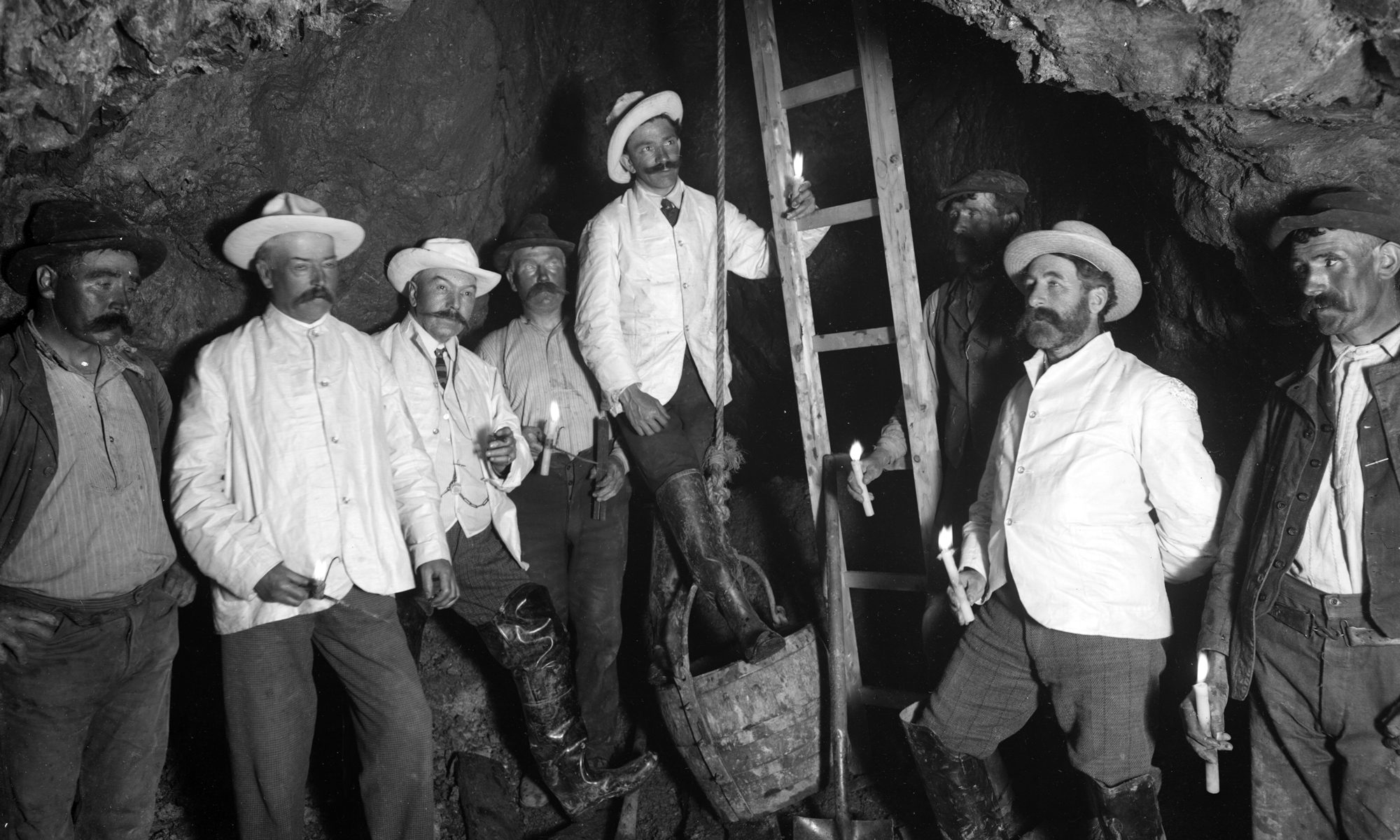 “I was telling her the 3 attributes of a novelist necessary to capture the British public, earnestness, power of words & a vulgar mind, & I think she agreed with it. Presently an English coastguard came along & got into conversation with us, & Miss F. talked to him just as if he had been anything else, & he was extremely tiresome with his talk about being in the navy & his beastly accent. He said their work now was mostly looking out for submarines.”

Tuesday 9th July. – Showery day. I cycled to Bonmahon to spend a few days with Miss Scarlett & Miss Fleming. I started at 2.45 and arrived a few minutes after 5, & it was a very hard

(263)
ride, seemed nearly all up hill from the Sweep to Kill. I thought I’d never get to Kill. It was comparatively short from Kill on. I found nobody at Mrs Moloney’s but the Moloneys themselves; Miss S, & Miss F. had gone for a walk, so as they were said to be cracked about the cliffs I went out as far as Tráig na nbó and to search, and the place was looking gorgeous in the sunshine, but there was no sign of them. I visited Miss Roche & returned to the Moloneys & just then they appeared, having been to look for the remains of Philip Barron’s college. They said they didn’t know if I was coming at 5 by new or old time, but I think it was a poor welcome. We had tea then, & after tea went to Tra na strella. They had been all along the cliffs but they didn’t know it was possible to get down into Tra na strella. The tide was in so we couldn’t get far along the strand

but we stayed a long time watching the cormorants on the big rocks, they looked so extraordinary standing still & flapping about, like some kind of prehistoric snake & bird mixed. Two of them seemed to be fighting. Miss Fleming was keenly interested in them, & they both admired the place properly. The wild thyme & ladies’ bedstraw were all out on the cliffs, & heather beginning. I find Miss F. works in an insurance office in Dublin, & apparently enjoys it.

Wednesday 10th July. – A fairly fine morning. I was sleeping at Miss Quinlan’s & was very comfortable there. Miss Q seems to be in bed nearly all the time & her sister runs the house. We were talking about Shaw’s plays at breakfast; Miss Fleming seems to know them pretty well, & is interested in them but not enthusiastic. We went down to the strand & spent the

morning there. Miss F. & I bathed – Miss Scarlett bathed before breakfast – & were much on the same level regarding swimming & diving. Then Miss S. gave Miss F. a lesson in O’Growney & we sewed till nearly dinner time. Miss F’s father would rage if he knew she was being taught a word of Irish; he considers Miss S. an unsafe companion for her, she says. After dinner it got cloudy & dark & we did not go further than the little headland above Capilano’s. It did rain on us a little, & when we went for a walk out to the road towards Stradbally after tea, it poured. Miss F. told stories about the office all the way. Its frightful the obsequiousness that office bosses etiquette seem to require to be consider due to the bosses, and Miss S. is one of the people who believes in authority and thinks whatever way

things are usually done is the right way.

Thursday 11th July. – Showery again, and colder than the day before. We bathed on the strand again, & tried to ford the Mahon afterwards, but the tide was in and the river ran so fast that we would have been drenched if we had persevered. Miss F. and I went for a walk along the cliffs then, and got as far as the Dane’s Rock. She was very suitably interested in everything, especially the old mine, which we threw a lot of stones down. She talked about a trip she & her father had in Switzerland just before the war; her father does not seem to be a very sympathetic sort of person, but her stepmother, Linda, called Lin, a second cousin of her father’s, seems to be all that could be desired. After dinner we went to Gardenmorris, with Charlie the donkey & his trap, to try & buy fruit.

It’s an enormous place, such a labyrinth of yards & haggarts & gardens. We found a gloomy & loquacious gardener who sold us gooseberries & sheltered us from a shower in a house full of grand grapevines & talked a great deal about prices of fruit etc, & how he has to pay gardening boys twice as much as he used to, & some people might say they ought not to be there at all, but in another place. He evidently thought a lot of them ought to be cleared off to the war – that’s what comes of being a gardener at grand houses. We had a frightful shower coming home, & I annoyed Miss Scarlett by walking up steep hills. That’s very apt to make vex people, though it makes no delay as the beast would be walking anyhow, and its rather hard on the walker. It cleared up slightly after tea, and we went for a walk out the Kilmac road. Miss Fleming [short hand text here]

told me she had been trying to make out something about me from the letter I wrote Miss Scarlet, & she thought me considerably older than I seem except that the writing looked modern.  She also thought from my calling Bonmahon desolate that I didn’t like lonely places. It was a lovely sort of soft damp evening with all the smells of flowers & plants brought out very much by the rain.

Friday 12th July. – A fairly fine morning. We went to Tráit na mBó in the after breakfast & spent the morning there, moving from to a low cave & back as the showers came. Miss Quinlan’s dog Teddy came with us & stayed all the time. Miss Fleming had a long Irish lesson as usual; if I was her I should not let it go on so long. We got home fairly dry & after dinner it got much finer & we went over to the cliffs

at Knockmahon & sat there till tea time with books, & with Teddy. I had God’s Clay, by A. & C. Askew, & it was very frightful, I didn’t get far with it. Miss F. admires likes E. Dell’s novels rather, but doesn’t take them too seriously. I was telling her the 3 attributes of a novelist necessary to capture the British public, earnestness, power of words & a vulgar mind, & I think she agreed with it. Presently an English coastguard came along & got into conversation with us, & Miss F. talked to him just as if he had been anything else, & he was extremely tiresome with his talk about being in the navy & his beastly accent. He said their work now was mostly looking out for submarines. Fortunately it was soon time to go home to tea. We were just above the austere cove beyond Knockmahon head. After tea we went out the cliffs by that lane from the road to Tranastrella,

and had a lovely walk. Miss F. picked a lot of heather to take home with her next day, & we said what a lovely place it would be for a honeymoon, & she said there were various men she would like to bring there for a sort of platonic honeymoon, without having to marry them, especially “Tubs” that is, Aylmer rose, the brother of Harriet Rose, who is in prison at Ipswitch as a C.O. I was not attracted by anything I heard of him, but she seems very fond of him. Then she was damning some aunts of hers & we got talking of aunts & children. Miss S. says she makes it a rule never to make any suggestion or give any unasked advice to her sister in law about her little girl – her brother is dead. She is not down on aunts like Miss F – apparently its those that had aunts & no mothers that object to them. It was a perfect evening, she warm & not exactly windy. I spoke of adopting a child if there was more in the family otherwise, & Miss F. scorned the idea very much.

with a glorious red sunset over the Comeraghs, and the cliffs covered with flowers. We went as far as Dane’s Rock, which seems to me more majestic every time I see it, and we threw a lot of stones down the old mine one of which certainly struck water.

Saturday 13th July. – Miss Scarlett and Miss Fleming both went away in the morning; the former to see the latter off to Baile Átha Cliath and to visit Aunt H. I spent the morning with Teddy, partly down in the Dock and partly out the cliffs. It was a dim cloudy morning, always looking like rain but never coming to it. I went as far as the cove beyond Tranastrella that Tony got down into one time, and attempted the descent with Teddy, but we turned back before we reached the strand. It was all sliding shale and gravel. I might have gone on if I had been alone, but Teddy didn’t like it, and it was very troublesome. I spent the afternoon on the strand, with Teddy again. It was hot and sunny then, and I had a good bathe though the tide was out. There were big pools among the rocks, and some children had made round walls of sand which filled up with water more than a foot deep and lovely and warm. I went to meet Miss Scarlett on her way from Cille Mhic Thomáisin,

in the donkey trap, & after tea we walked over to the cliffs at Knockmahon again (meeting the coastguard again & she talked to him quite affably; some people have no instincts) and home by the road.

Sunday 14th. – It rained nearly all the morning. Miss S. did not go to church, & in the eve afternoon we went over the cove beyond Knockmahon & climbed about on the rocks there, going to the end of the austere cove but no further. It was very windy, and there were splendid great waves breaking far out into the bay, green there & brown with sand nearer in, & mists of spray in the air. It reminded me of the rocky coast of Skye – “For all is rocks at random thrown,” in the Lord of the Isles. We stayed there a long time, & she said told me about the scene at the Church Guild when the

resolution condemning the rising was rescinded, & of the pathetic appeal some dean made to them to pass it originally to save the Guild, & how the church authorities punish them for passin rescinding it by forbidding them to have any church services in Irish. She thinks it would have been better not to rescind it because it makes the Guild seem so completely Sinn Féin. She is a great friend of Edith Norman & was at school with her, & is younger that she! After tea we went up the road, overtaking a woman who turned out to be a good Irish speaker with a husband & children  likewise, & we stayed a while talking to her – she was a Mrs Hurley – & when we went down the lane to Tranastrella her very nice young smooth black dog came too & accompanied us all the way to Ballydewan. I think Miss S. thought me tiresome about dogs, & I thought her tiresome about country children. It was a fine evening, though not as fine

as Friday. The best of the cliffs are over soon after one gets to the Waterfall cove, but it was all gorgeous. We came back by the road & the dog went home.