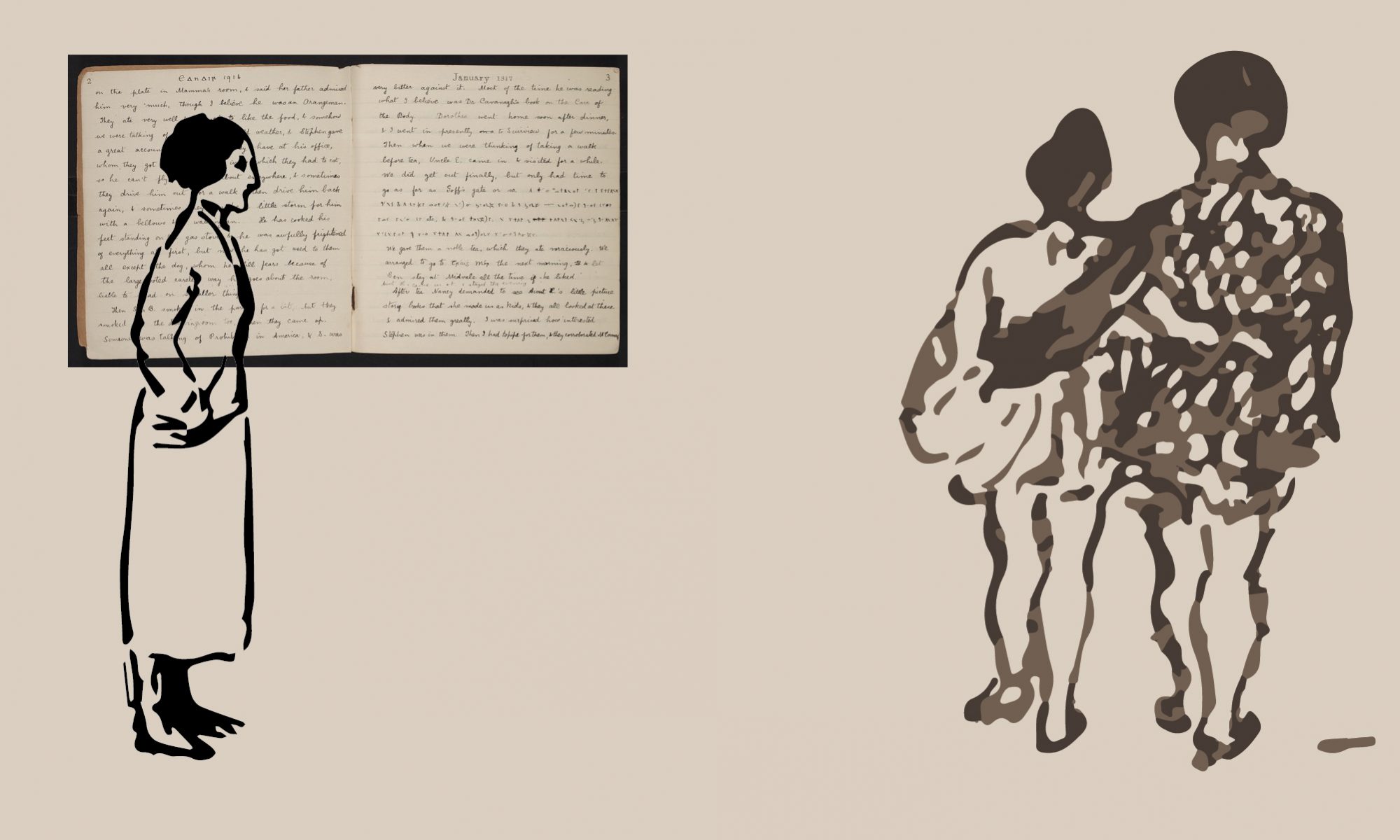 “I visited Mrs Power again & while I was there another friend of hers came in, a stewardess off the Ros Láir boats, who was crossing that night. She said they carry lots of soldiers, and that life belts are put on everyone before the boat starts.”

Monday 14th. – I visited the carstand Powers a.d. & they scoffed at the idea of Gallagher being able to lecture & showed me grand knitted coats Mary Anne Lawlor had given them. Then I went to the hotel & visited Mrs Power in bed – she didn’t seem bad at all – & she told me how the Leinster had no convoy & was full of soldiers. I had tea with Tash at 6 with visits from Kitty, who was looking beautiful. Tash is going to put up her hair soon, but that won’t make her seem grown up. She asked questions

about Nancy, & was greatly interested in all I could tell her. I visited Mrs Power again & while I was there another friend of hers came in, a stewardess off the Ros Láir boats, who was crossing that night. She said they carry lots of soldiers, and that life belts are put on everyone before the boat starts. I went on to J. Connolly’s class at the League, and was appalled to find them starting Seadna again.

Tuesday 15th Oct. – Mamma & Aunt H & I went to tea at St D’s, to hear T. read an essay he had written on Comte & the Ideal Religion. It was extremely good, T. has a great power of writing that sort of thing he has the right language all at his command as well as being able to think & reason clearly. Mettrick

came in in the middle of it. The conclusion was that Comte’s religion won’t do because Humanity can’t be a proper loving & protecting power & there is no ideal religion to be found. We had a lot of discussion afterwards about Love; Aunt H holding that its possible & desirable to all humanity in general, & T & I holding that what can be felt for people in general is not rightly called love. Dorothea holds that cold ideas of justice in dealing with the poor are not as good as love, & that if she were poor she would hate to be given clothes because it was not fair that the giver should have a lot & she none. It seems to me that is the honestest way & the least likely to

harm the recipient. They all agreed that you can’t do people much spiritual good unless you love them, Mettrick included. We talked a good deal about dreams too. I know Mettrick was interesting, he seemed to agree most with Dorothea, though he himself can’t love people much.

Thursday 17th Oct. – I went to a F.L.S. committee at the meeting house in the morning. Tom has got several promises of evenings, mostly from women, & I am to do one. T. is to be kept on as secretary. Charlotte came in a little after 6 to take me for a walk. We went out the road as far as May’s Lane, & the trees were a dream, & the road white & smooth. Charlotte longs to get out of Waterford &

seems as lonely as I am; her sisters appear of no use to her at all. A very ugly white & black kitten came crying on the road in the evening & we had to take it in. I went to the Gaelic League & found the senior class at Gala an Coille by Dr Sheehan. Apparently they do that one night & Seadna the other.

Saturday 19th. [short hand symbol above date] – I went to St Declan’s in the evening & found Charlotte & Mettrick & Seán Ó Floinn – the latter having come for the weekend. He also gave us a great deal of very interesting information about [sp. Mormans?] etc – priest’s average incomes & other things. A.P.P get over £300 & a rate £250, which seems a lot for a compulsory bachelor. He described the hell & judgement

sermon’s at missions; one priest describing the detailed trial as at a petty sessions court & another saying God knew where you wd go before you were born & thousands die every minute & representing souls going into hell at about 4 a second Redemptorists as usual. He says 80% of women go to confession & communion every fortnight or month, & 80% of men only go once a year, which apparently is all that’s necessary. He gave a horrid impression of the importance given to missing mass etc compared to real sins, & probably increased Charlotte’s contempt for Catholics, though Mettrick was useful in now & then showing that Protestants are just as silly or worse in some points – buying seats in church for instance, which

Catholics hardly ever do. Seán says if you don’t go to missions you will be disapproved of.

Sunday 20 Oct. – T. & Dorothea & Seán all came to dinner, Seán with a bad cold. He says he thinks he will sell most of his books, they hamper him so when he wants to change his lodgings. He talked about the war, & said when the Germans leave a French village as they retreat, they say to the inhabitants “Goodbye now, & God help you when the English come.” I don’t see how this could be known.