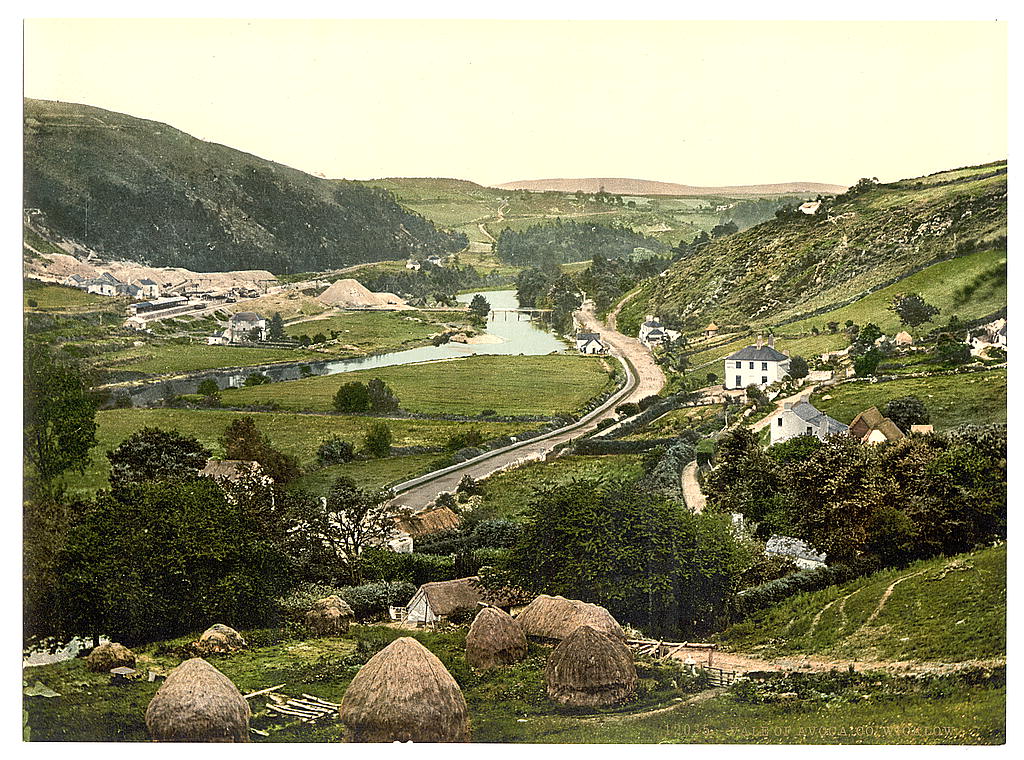 “There was a cottage in the middle of it, on the edge of the wood; just like something in a fairy story, & a pretty grass path beyond, but a frightful quagmire beyond that, increased of course by the melted snow. I was reading Emma by this time; one of the books I got from Janie Bell, it is one of the best novels in the world.”

Monday 24 March. – I went to town to get sugar etc in the morning & had a great rush visiting Aunt H., getting dinner & packing. Uncle Fred had spent the weekend at Tráit Mór [Tramore], & dined at St Declan’s, & was with Annie & me in the train. Tom & Edwin saw him off. It was a very fine bright afternoon and the country was looking very well. Uncle F. talked about photography & the futility of complaining to Bobby about the shortcomings of the D.S.E.R, and tried to get the difference between 1st & 3rd refunded by the ticket inspector, he having a 1st class pass. There was a boy with a trap at Woodenbridge for our luggage, & we cycled; less than a mile to Oakwood along a lovely road under one wooded hill & opposite another. The hotel was very comfortable, & we seemed to have it all to ourselves. We went for a walk after tea, up the hill behind it – very bushy & brambly – & into the wood where there was a lovely long

path that brought us out on the road near the big hotel. Then we sat in a little parlour with a grand fire & read A Study in Scarlet aloud. There was a nice smooth black spaniel at the hotel; Glen – short for Glendalough. A young doctor lives there, but we didn’t meet him. Mrs M’Cormack was very pleasant, & so was the little maid Eileen.

Tuesday 25th. – Fine cold day. We went north up the road & across the river to Avoca, a little bit of a village, & then turned back through a wooded road and which became more ordinary looking as we went on, & eventually reached Arklow. An ugly town, especially towards the sea, and it doesn’t look as if you could even get to the actual sea, but there are some very convenient looking rather small houses in it. We bought cakes & visited the ’98 monument to Father Michael Murphy etc, and the Catholic church, which is rather

too bright. Then we came home by a short & much prettier road, all under woods, and the latter part of it was the road we used to walk out in 1898, where the water fell down rocks into lovely little stone pockets out of the wood, & where there were mossy banks on the other side with violets on them. No violets there now; we saw no flowers but celandine & a very rare primrose & a few sprinkles of furze. In the afternoon we went across down to the station and across the gold links and up a beautiful path except that it had a beastly surface of loose sharp stones. It landed us at a sort of farm settlement on the top of the hill, called Bally-arthur as we afterwards learned, & we found a lovely precipitous way down through the wood which halved the way back. But Annie

doesn’t like too much of such places because she sprained her ankle twice in the past & its not too reliable. We finished the Study in Scarlet in the evening, & I had a lot of answers to letters of condolence to write. We were talking about children the night before, & Annie confessed that she took very little pleasure out of them, I don’t think she can ever have had much experience of any that she could get really fond of. She says she is a confirmed old maid & likes a quiet punctual orderly house & hates the noise & bother of children, & is utterly sick of having to take care of people, & wants no more of it, which certainly I don’t wonder at.

Wednesday 29th March. – Letters sent on from Brigid Ni Dutlaoire [sp?], Miss Fleming, Mrs & Miss Curtis, Ben & Lulu. It was just as cold this day, but less windy. We started to investigate the road up the hill west of the big hotel, but found

ourselves on the Aughrim road instead & as it was also lovely we followed it. There was a little river on one side & a hanging wood on the other, as usual, and water came dropping out of the wood & made lovely assemblages of icicles, some pointing up on blades of grass and some hanging down from bramble stalks & ivy & heather tufts. Some of them were a yard long. The road got more open & sunny presently, with fine slopes of furze on the hills, only it wasn’t in flower yet, & we crossed the river & in about 5 miles altogether reached Aughrim in a snow shower. It was a fair day, & there was a field near the station full of cows, where the fair seemed to be held. A much better plan than having it out in the street. We walked to the Catholic church, & inspected it, and turned home again the same way – a lovely ride, mostly down hill. I get very cold riding & walking, but Annie

Friday 28th March. – A fairly fine day. We went to Avoca in the morning – but before that we went to inspect the mysterious palace that the Protestant rector is building on the hill next door to Oakwood. It has a long zig zag avenue up the hill with every kind of shrub all beside it, & a little orchard & a rose pergola up near the house. It had great greenhouses too. A workman that was in it said he couldn’t let us in, but if the rector was there he’d be delighted to take us all over it. There was a lovely walk on from the house along the edge of the hill. We went to Avoca to buy stamps then, & up the road behind the Protestant church, & home partly by a path through some fields, which was very

muddy. I don’t think I am sufficiently independent of outdoor comfort really to enjoy the country before the middle of April. It rained in the afternoon but that didn’t stop Annie from wanting to go out. It was with difficulty I avoided being made to cycle. We went round to the road that goes up behind the new big hotel, which after nearly an hour’s walking brought us out at the Protestant church. It was very pretty through the wood first & there was a fine view most of the time. [Short hand text here]. The rain got heavier all the time but it didn’t seem to do Annie’s cold any harm. There was a big party of the doctor’s friends in the dining room that evening, so we had to have our tea in the drawing room.

but melted away industriously in the sun all the morning. We went down to the bridge & along the same road as on Thursday, under the wood. It was the shady side of the hill, the sun was only just showing over the top, and it was pure winter all down to the stream under the road. The wood was full of little bushes & brambles & ferns every one loaded with snow, the bare branches thickly outlined with it, all frozen & dry & sparking, like fairyland up the slope with the cold glints of sunshine here & there through it, but mostly everything was in shade, & especially the road, which was white with snow & rough & slippery in most places with ice. There was thick smooth snow beside it too & all down the bank to the stream. The hill across the valley was quite bare in the sun, but where we were was the most exquisite snow I ever saw, except the

January 1917. We went a bit along the Arklow road too, but it was all melting & sloppy. Annie went for a ride in the afternoon, but I only went to the station to post a letter, & back by the lowest path along the hill. There was a cottage in the middle of it, on the edge of the wood; just like something in a fairy story, & a pretty grass path beyond, but a frightful quagmire beyond that, increased of course by the melted snow. I was reading Emma by this time; one of the books I got from Janie Bell, it is one of the best novels in the world.

Sunday 30th March. – Annie went to church & Ikey [sp. ?] and I went up behind the hotel to the boítpín [sp?] that brings you into the woodpath where we were the first evening. It was lovely & warm & sheltered there and I sat a long time where by the edge of the wood with a grand

(114)
view before me, reading Emma. The summer time began this day & the clergyman where Anne went forgot it & had to be summoned to church very late, & she got frozen. There were snow showers in the afternoon, and we didn’t go out till after tea. Two officers came in a motor for late dinner. We went across the golf links & into the wood there again, but not at all so far as the other time. There is a lot of celandine there. I must say I should like to see a wood on flat ground for once.