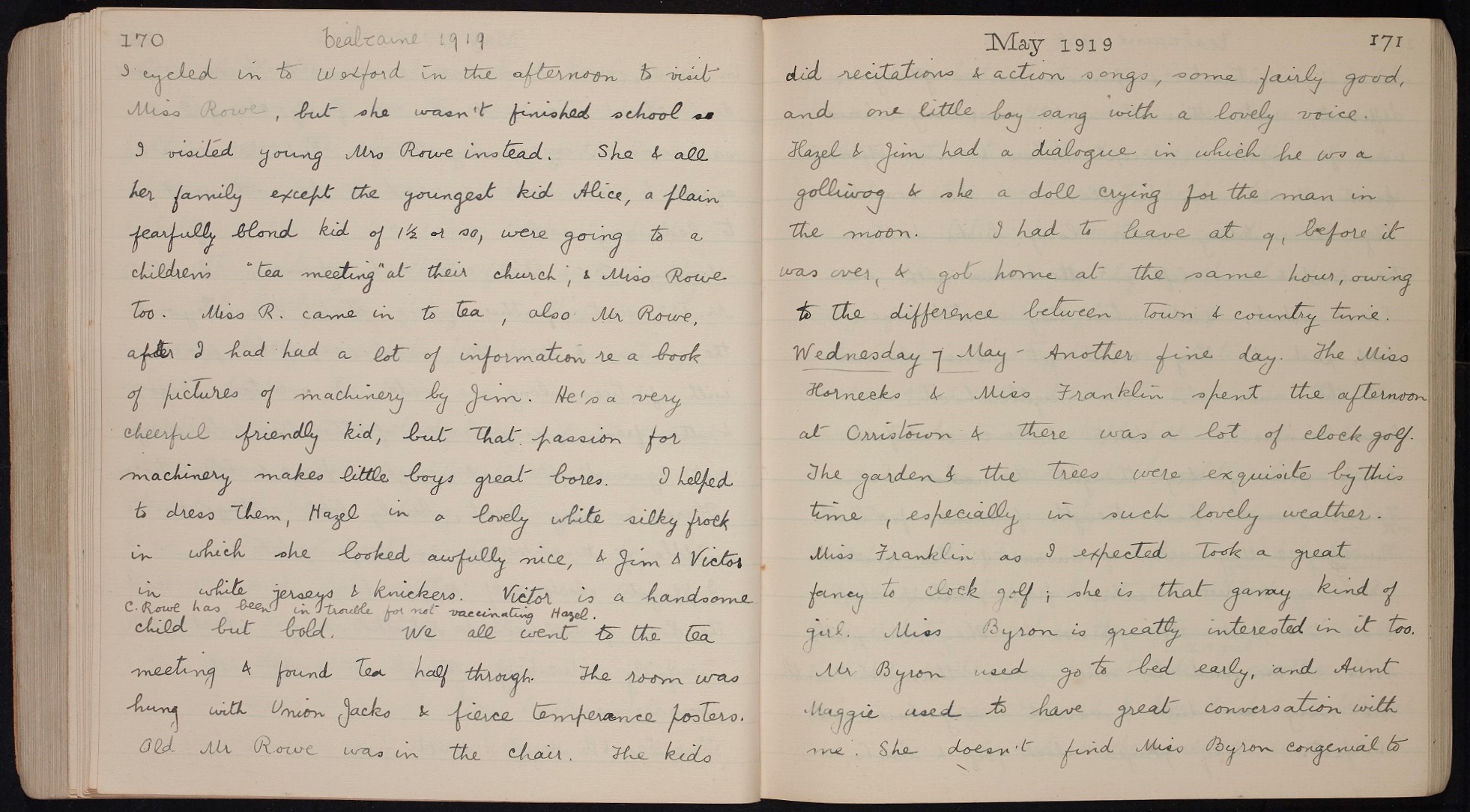 “This was the day the military motor lorry broke down on the road & was left in the avenue with no leave asked, and when they wanted men to help push it they could get none because all the men in the neighbourhood are Sinn Féiners. I don’t believe Waterford people even if they thought themselves Sinn Féiners would have strength of mind for that. “

Monday 5th. – Still cold and showery. Aunt M. & I went further along that lane beyond the river, & it is the most exquisite place; with fir trees along one side at a certain place, & the fresh young leaves of other trees standing out against them, & gorgeous furze & blackthorn. There’s a very neat, lonely little cottage in the middle of it, like one in a fairy tale. I played clock golf & got down to 26, & read the House of Halliwell & Notwithstanding – which latter is fairly interesting though it ends with an absurd miracle.

Tuesday 6th May. – A much finer warmer day –

I cycled in to Wexford in the afternoon to visit Miss Rowe, but she wasn’t finished school so I visited young Mrs Rowe instead. She & all her family except the youngest kid Alice, a plain fearfully blond kid of 1 ½ or so, were going to a children’s “tea meeting” at their church, & Miss Rowe too. Miss R. came in to tea, also Mr Rowe, after I had had a lot of information re a book of pictures of machinery by Jim. He’s very cheerful friendly kid, but that passion for machinery makes little boys great bores. I helped to dress them, Hazel in a lovely white silky frock in which she looked awfully nice, & Jim & Victor in white jerseys & knickers. Victor is a handsome child [Superscript: C. Rowe had been in trouble for not vaccinating Hazel.] but bold. We all went to the tea meeting & found tea half through. The room was hung with Union Jacks & fierce temperance posters. Old Mr Rowe was in the chair. The kids

did recitations & action songs, some fairly good, and one little boy sang with a lovely voice. Hazel & Jim had a dialogue in which he ws a golliwog & she a doll crying for the man in the moon. I had to leave at 9, before it was over, & got home at the same hour, owing to the difference between town & country time.

Wednesday 7 May. – Another fine day. The Miss Horrocks & Miss Franklin spent the afternoon at Orristown & there was a lot of clock gold. The garden & the trees were exquisite by this time, especially in such lovely weather. Miss Franklin as I expected took a great fancy to clock golf; she is that garay [sp.?] kind of girl. Miss Byron is greatly interested in it too. Mr Byron used to have great conversation with me. She doesn’t find Miss Byron congenial to

her – their interests & opinions on everything are different, and Miss B. will never say a hard word of anyone – except strikers & union officials. Aunt M. is very humble. This was the day the military motor lorry broke down on the road & was left in the avenue with no leave asked, and when they wanted men to help push it they could get none because all the men in the neighbourhood are Sinn Féiners. I don’t believe Waterford people even if they thought themselves Sinn Féiners would have strength of mind for that. [Small short hand symbol]

Thursday 8 May – Two of Susan Poole’s sisters, D Lucy & Alice Deakin from Hadden’s shop came to spend the afternoon. They were pretty girls, & seemed to me nicer than V. Franklin but very dull & vacant – very backwoods in fact. They played clock gold & bowls, &

we found 1 sheep short in the lawn & came on her after a search in the pool in the lower corner, unable to get out. Aunt Maggie & Miss B. got her out 7 then we had to hold her & wring her out a bit, she was so caked with wet mud. She had a giddy weak head & wasn’t really fit to look after herself.

Friday 9th. – We drove to Wexford in the afternoon & Aunt M. shopped & Mr B. & I went to a nursery garden & bought cabbage plants. It was a damp misty sort of evening.

Saturday 10th. – Fine warm day. I polished the brasses of the trap and got them looking lovely. I cycled to Wexford in the afternoon to see Miss Rowe, & stopped on the way to intercede with a girl at a cottage for a bird in a cage; I offered to buy it, but it belonged to a brother who died & she couldn’t think of parting

with it. She was very polite. Miss Rowe had her sister in law with her, & they gave me a grand tea. Old Mrs R. came in for a while, when we were discussing the reasons of the backwardness of education here. Miss R. can’t see any reason why the Irish could haven’t thrown their hearts into civil & social reform as some people in England do – of course I suppose she thinks striving after self government in all nonsense, but its curious how people can’t see that most of the value of the good institutions depends on national independence, & how insecure they are without it. Mrs R. complained of the seditious songs that are taught in national schools. Miss R. took me into the garden & picked lovely tulips & narcissus for the me. We started back at last, & I was horrified to find, after talking about novels for a while, that she approves of the

absorbing of small nations into big states, & saw nothing wrong in an empire aiming at world supremacy – at first, that is; for she did modify her remarks gradually. But she did seem in a deplorable mental state. Somehow when I meet a person as intellectual as she is I expect to find them inclined towards progress & humane enlightenment, but they don’t always be. We had tea at Orristown, and a great discussion on lawyers, & whether the system of employing paying them to fight cases is right or wrong, & gave the rich a monstrous advantage, but & the others partly agreed with me but didn’t see what better system could be substituted. Miss R. had to go on to visit someone else that she was going to spend the night with.

Sunday 11 May. – No church again. It wasn’t fine in the morning but got fine later, and we took a little drive beyond Killinick in the afternoon, and Mr B. visited the 2 old women there that he generally goes to see on Sunday. In fact we all visited them.

I had a lovely walk in the lane after tea. It was a dream of beauty then.