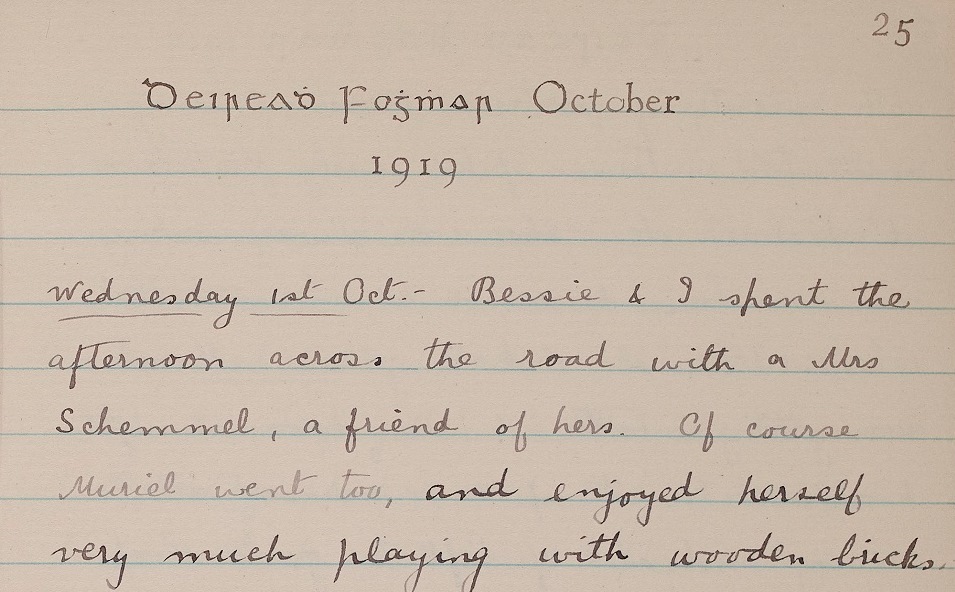 “Bessie & I took the baby to Lafayette’s in Royal Avenue to be photographed, and had a dreadful time. First we were kept waiting, & then as soon as we got into the room she commenced to bawl, & kept on for nearly ¼ of an hour, screaming and wringing her hands in spite of all the photographer & we could do with toys which he produced. Finally he did get 3 photos. Of course Bessie thought it was all his fault for not producing the toys quick enough; I thought if I was a photographer I would charge extra for babies.”

Monday 29th Sept. – A wet day. Mrs Boal spent most of the afternoon with us. I went to tea at Glynns’ & met a very nice sister of Mrs G.’s, a Miss Halliday, who was staying there; a nurse. The younger daughter Kathleen spoke very little & was rather like a blonde mouse. They talked about babies á propos of Muriel. It is a house where I feel a sense of being able to talk freely & a very friendly atmosphere. After tea Mr Glynn took his wife & me down town in his little motor to see the overflow meeting outside the Town hall. Carson had made the railway strike an excuse

for not coming over to the open the new Unionist campaign, but they had the meeting in the Ulster Hall all the same, but the overflow was rather small & very unenthusiastic. I thought maybe it was their strong silent way, but Mr Glynn said it was genuine indifference. One Moles spoke rather well, others were dull though all were audible & had good deliveries. I think it was Moles who said the idea of the parliament in this country was of purely English origin. Another man told shocking stories of a prominent Sinn Fein who said if England was at war with hell we should be pro-devil, & brought up one of Cuyon’s [sp. ?] sermons threatening excommunication against police who enforced conscription. It was rather interesting, but we didn’t stay long.

morning, & found Miss M’Dermott’s studio, but she was out, I went out to Holywood by the 6.30 train, according to Maud’s instructions, & found Stephen at the Holywood station. He had something on his shoes that made them absolutely noiseless, and walking in the dark with him was like walking with Tony in the dark road at Tráit Mór. He talked about Louis, & said he & Maud were to be turned out of their lodgings on account of the baby. They were nice enough lodgings, but a long way from the station. Maud, in a loose black gown, was the image of Queen Victoria in height & figure; as handsome as ever in face. They gave me a grand tea, & Stephen inquired what was Louis going to be brought up – meaning what sect. “I’ve made up my mind to have ours baptized”. To

please Maud, I believe, but she had him in a fearful state of bondage to the Presbyterian Church, singing the choir regularly. I told them about the marriage service discussion, & Stephen said it was queer how different he was from Queenie & Nancy: he wouldn’t mind what he said being married – apparently would promise any old thing without dreaming of meaning it. Maud is the same, I fancy she wd rather like to have “obey” in the service. Both said it was only a form & why spoil it with alterations. I wish I could understand that sort of mind; it is an absolute sealed book to me. Stephen recurred to his boyhood in Cork rather in Tony’s style as we were sitting round the fire after tea, he said how much more grown up Tony is than when he left home, & how much more interesting – it

sounded rather as if he had not found him interesting before. Maud talked a lot about her young brother Brownlow, it means he & Ben have it in common that neither can strap a razor or save money. I do like Stephen’s readiness to discuss his family. Owing to a damned choir practice he had at 9 I had to go by the 9.6 train instead of the 9.30, as I relied on him to show me to the station. He talked a good deal about religion then; haven’t really much more than myself. He must have a little more, though, for he doesn’t like the Age of Reason.

Wednesday 1st Oct. – Bessie & I spent the afternoon across the road with a Miss Schemmel, a friend of hers. Of course Muriel went too, and enjoyed herself very much playing with wooden bricks. Mrs Schemmel has 2 little sons, Jacky, a very pretty kid with a splendid mop of curly brown hair & blue eyes & a heavenly expression, & Desmond, a very funny fat child of 2 with tight rings of hair & dark eyes & a permanently turned down mouth & a lot of bare leg & arm showing. We had a noble tea, & a good time altogether. Mrs S & Jacky had recently been staying at St Anne’s, Dalkey. Two of her sisters in law came in & both were very pleasant. Bessie was good company all this time,

with plenty of questions to ask, & very well told stories of her early flirtations at Lisburn etc. She was always asking me does Louis do so, or can Louis do that, whenever Muriel did anything. Muriel was getting a tooth, & was cross at night, & allowed to sit up & be amused all the evening instead of left to go to sleep. The maid is not much use with her, but Bessie has her spoiled.

Thursday 2nd. – Fine day I visited Nancy in the afternoon. Tony had gone out to Holywood to visit Maud; Nancy believed she would be able to find out what impression he got of her, but I wonder could she. She said if Maud’s baby is a girl it is to be Honor Elizabeth – 2 fine names but it sounds too like a sentence. She had a lot of napkins which she was herringboning & I did one in about an hour. She wants a boy herself because it was

borne in on her from the start that it would be one, and now she would be disappointed if it wasn’t. She asked me to tea the next evening.

Friday 3rd Oct. – Bessie & I took the baby to Lafayette’s in Royal Avenue to be photographed, and had a dreadful time. First we were kept waiting, & then as soon as we got into the room she commenced to bawl, & kept on for nearly ¼ of an hour, screaming and wringing her hands in spite of all the photographer & we could do with toys which he produced. Finally he did get 3 photos. Of course Bessie thought it was all his fault for not producing the toys quick enough; I thought if I was a photographer I would charge extra for babies. We got dinner at the vegetarian restaurant then, & Muriel was very good.

I went to Ormeau Road and found that Bob’s sister Edie, whom Nancy seems to have got quite fond of, could not come, nor of course Maud either. Ben was there, & Stephen arrived soon after me. He and Tony are not so alike when they are seen together. First Ben set to work to make a fire, & it took him ages, and Bob did not come in for a while. All through tea finance was the subject, especially Ben’s & Daddy’s modes of dealing with it. Ben gave out that he lived on overdrafts from his bank & constantly gives away cheques without filling in the counterfoil, & told pathetic stories of the way his father takes his money from him to invest. They all talked about Daddy’s juggling with banks & shares – how he makes £100 a year by speculating, & hates parting with his cash, except to the bank, so much

that when Tony wanted money to go to Belfast, he gave him a cheque & then hurried down to the bank before him to lodge the money to pay the cheque. This seemed to me a champion story. Daddy seems to have a great resemblance to Uncle E. After tea we sat round the fire, Nancy & I herringboning more napkins. Bob, as usual, was very quiet but looked very nice. Stephen talked a lot of professional shop to him, which was tiresome. They talked about spiritualism a little when it was fairly late; I think it was Stephen that seemed to take it seriously Tony, as might be expected, was reading a sort of dictionary book. Stephen was saying that what this country wants is direct trade with America, and of course that provoked opposition from Tony – the less we have to do with America the

better, they’d only make us worse – the beastliest people on earth. Stephen seems rather fond of their literature, & praised their jokes. There were a few songs, Nancy sang Corraig donn & Eurydice & a song about a deserted girl dying in a snowstorm, & Stephen sang Sean Dún nan Gall & something else, & Tony sang one verse of Here’s a health unto his majesty – he couldn’t remember the other, & his voice did sound lovely after Stephen’s, like a peach after an apple. Ben & I went part of the way home together & arranged to look for some of Wolfe Tone’s sites next day on Monday with the help of his Life. Ben seems to have a certain regard for Bulmer Hobson.

Saturday 4th. – I paid a long visit to the Glynns in the evening, & they were as nice as ever, and talked solely of interesting things; politics & religion – conversion etc. Their son Willie who teaches in Cork grammer school, is a

Sunday 5th. – Bessie didn’t try to go to meeting, Aubrey started late & came back without getting there. Bessie & I took the baby out, and sat in Alexander park a while; a very pretty place, looking lovely now with the turning trees & the exquisite autumn atmosphere. In the afternoon an uncle & aunt of Aubrey’s came to tea, they were prosperous respectable people, not like Friends at all. The aunt was English and talked about spiritualism, the uncle argued about politics, & Aubrey talked comparative sense to him. After they were gone A. read Canadian poetry aloud to me, it seems to be his choice. He considers Bessie makes too much display of her legs, and I maintained that the more seen of them in the home circle anyhow the better because they were so pretty.