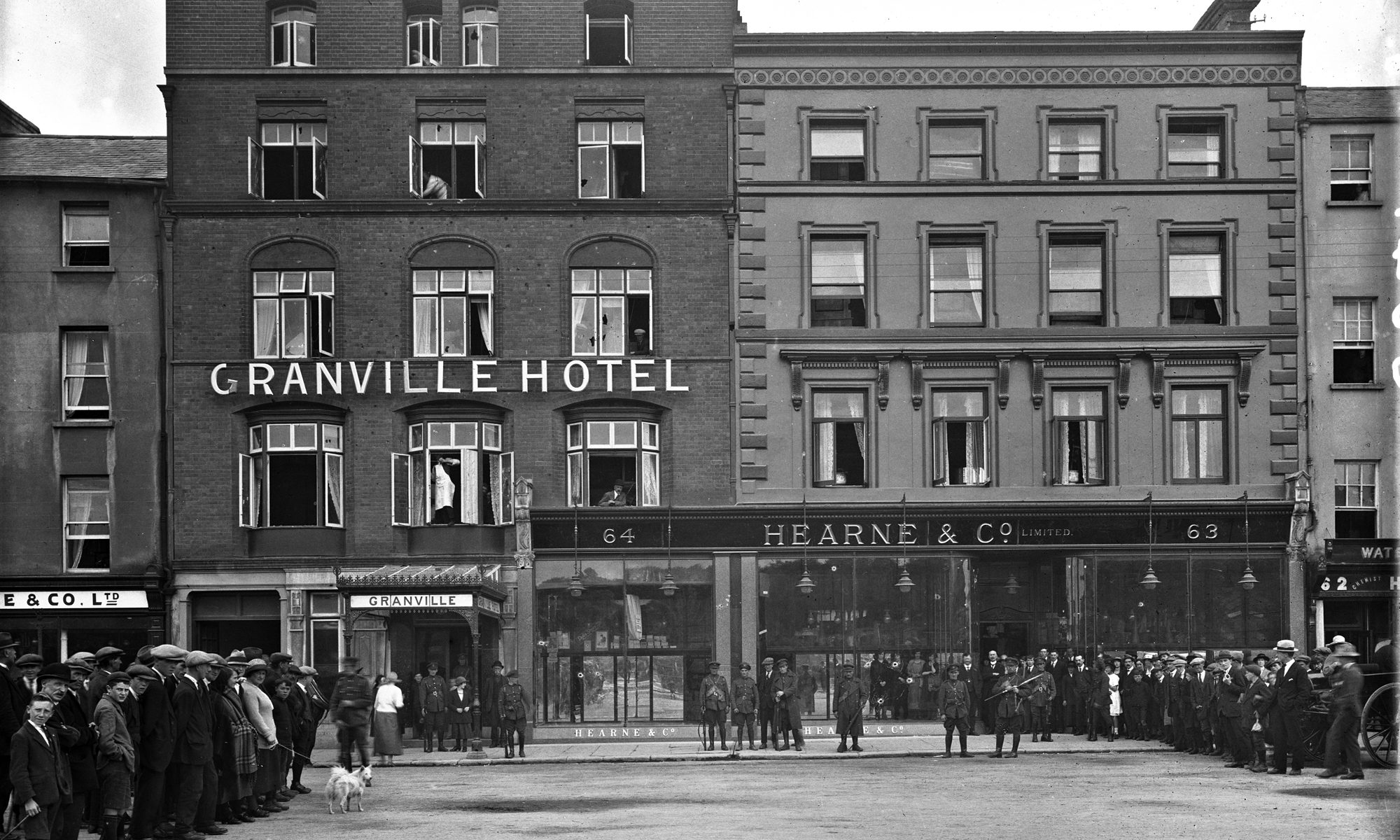 Monday 29th. – Wet again. I went to St Declan’s in the afternoon & D. made various comments on the last bit of Callaghan but one – some helpful & all interesting. She said one remark of his to Dr Morrin just after the trail reminded her when he was about 17. She said there were some likenesses between Tony & him.

Wednesday 31st Dec. – I was busy typing these days, & got a good deal done. Aunt H. took Louis out on Wednesday afternoon & brought him here for a while, & he was very good. We heard that Ben & Tony were both coming the next day for a visit. Uncle E. was having the Powers’ Famous Female Sovereigns read to him & it was rather interesting, but the one about Catherine II & her predecessors was very revolting. D. had a wire from Belfast to say Nancy had a son. 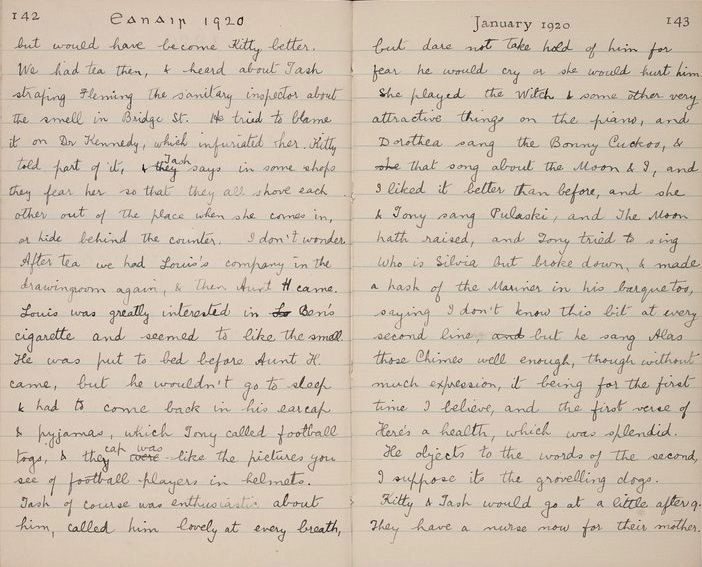 (141) Thursday 1st Jan. – Cold day but fairly fine. Aunt I went to tea to St Declan’s & Aunt H. came up after tea. I found D., Louis, and Tony in the drawingroom; Ben had not shaved & I don’t know what Tom was at. Tony took possession of the jazz toy I had brought for Louis, and played with it till he broke it. Louis didn’t care a pin for it. He had on Aunt H’s blue frocks, & a white pinafore with blue pictures that Maud sent him, & looked a dream; & was very cheerful, getting about the room and taking an interest in his uncles – no, that was after tea, before tea he was crying in my arms when Kitty and Tash came. Kitty was in grey & Tash in a red crêpe de chene dress with a black velvet sash, which was very pretty

(142) but would have become Kitty better. We had tea then, & heard about Tash straping Fleming the sanitary inspector about the smell in Bridge St. He tried to blame it on Dr Kennedy, which infuriated her. Kitty told part of it, & Tash says in some shops they fear her so that they all shove each other out of the place when she comes in, or hide behind the counter. I don’t wonder. After tea we had Louis’s company in the drawingroom again, & then Aunt H came. Louis was greatly interested in Ben’s cigarette and seemed to like the smell. He was put to bed before Aunt H. came, but he wouldn’t go to sleep & had to come back in his earcap & pyjamas, which Tony called football togs, & they cap were was like the pictures you see of football players in helmets. Tash of course was enthusiastic about him, called him lovely at every breath,

(143) but dare not take hold of him for fear he would cry or she would hurt him. She played the Witch & some other very attractive things on the piano, and Dorothea sang the Bonny Cuckoo, & she that song about the Moon & I, and I liked it better than before, and she & Tony sang Pulaski, and The Moon hath raised, and Tony tried to sing Who is Silvia but broke down, & made a hash of the Mariner in his barque too, saying I don’t know this bit at every second line, but he sang Alas those Chimes well enough, though without much expression, it being for the first time I believe, and the first verse of Here’s a health, which was splendid. He objects to the words of the second, I suppose its the grovelling dogs. Kitty & Tash would go at a little after 9. They have a nurse now for their mother.

(144) Ben had an effective story about sleeping for a fortnight with Alfie Watson in a bed 6 inches wide, etc – being so late to breakfast that his blind old landlady began clearing it away before they started, etc. At supper I said Kitty would have a double chin some day, and someone agreed, and this gave Tony a chance to say she was the prettiest girl he had seen for ages, which I suppose he would never have allowed himself to remark if some criticism of her had not been made. He said something else in praise of her, evidently admired her very much. I thought her quietness and sweetness would make an impression on him, and that he would admire her more than Tash. Aunt Bessie sent Louis a marvellous bird, made out of Polly’s old feathers, on what foundation could not be ascertained, with claws and black button eyes and a most expressive face. Ben had a verse of a song which he says Genny Gallagher sings, which brings her strongly to mind:

“When I was young and in me bloom,
A plate of stirabout I’d consume;
But now I’m old and getting grey,
I depend me life on a cup of tay.”

Friday 2nd Jan. – I went to town in the morning and changed Louis’s shoes for smaller ones and got money at the office. There were no more jazz toys to be had. After dinner I went to St Declan’s and took Louis out, to the nursery which was beastly muddy & then to Suirview where he stayed for a while. It was pouring rain when we went back. He played about the drawingroom then, & got great fun out of Tony, who had to carry him up & down the room, reading Hiawatha with his other hand & Louis trying to get hold of it. He makes a kiss now when D. tells him to kiss her, but he can do it with his back turned. He also played the piano with Ben, which wd have made a nice photo. They had dinner at 6.30, when Tom came, with a bottle of port that Ben had got, & which seemed to me nicer than the general run of alcoholic beverages.

Saturday 3rd. – Miss Scarlett came to dinner on her way back from Port Lágha to Át Cliat. She seemed to have had a nice time there, but gets very short Christmas holidays. She brought us chocolates & chocolate biscuits, & took a loan from the Heir of Redclyffe. Uncle E. was down to dinner. I went to the train with Miss S., and called in to the hotel on the way back to shelter from a shower. Tash was the only one there; Marie & Kitty were spending the afternoon at Robertson Ledlie’s sale, where she had spent the morning. She asked questions about Nancy, and seemed to think it rather cold hearted of Ben to leave Belfast before Christmas instead of staying to encourage her & to write letters. After tea I went up to St Declan’s

(147) to ask them all to dinner next day, & found Ben had gone to Tráit Mór & Tom was out canvassing. We were talking about Nancy, & Dorothea gave me an appalling description of her indifferent manner towards Louis when she first met him, saying he was very ugly, & “such a child!” & never making any show of affection or interest towards him till D, having cried two nights with disappointment, told L. in her presence that she was a beastly, cruel aunt. The day after that she reformed somewhat. She was sick of babies after the Home, and full up of Bob & her wedding, but she might have made some pretense of liking him. Tom came in before I left. Tony was complaining bitterly of the attempted forcible Gaelicizing of the school of music in Cork – all the teachers told them must

(148) be able to teach in Irish within a year, & apparently only traditional Irish music allowed. He says Uncle Stephen says why can’t I go to America without a passport.

Sunday 4th Jan. – Very fine bright day. They all came to dinner, & Uncle E. did not come down. Ben was speaking of playing Consequences with the Midvale kids, & he had one lovely continuous one, if only it could all be found in one paper. Spurgeon met Jezabel in heaven & said to her “How did you get in?” She said “Are you sure where you are?” He gave her a volume of his own sermons & she gave him his own present back. Louis had to be fed somewhere in the middle of dinner & travelled about the floor afterwards. He had knocked his ear against the grate that morning & burnt it a little, &

(149) it was swelled, but did not seem to trouble him. We had the blocks out for him, but Tony took possession of them after dinner to make pictures with. I like the way Tony goes round a room inspecting books & pictures; he seemed a good deal struck with the big map here. After dinner Tom & I took Louis out the road a bit & returned to St Declan’s at 4.10 or so. Mrs Hayden and her daughter were expected that afternoon for some music, but they didn’t come till 5 or after, & then Evelyn wasn’t there, only Louie. We had afternoon tea, & I had to take Louis away for a bit, (they probably said going home that Mrs Jacob should not have her infant child so much in the room) & then Louie fiddled. I didn’t get much enjoyment out of her fiddling,

(150) except when she played the Humoresque, & found afterwards that she was not thought as good on the violin as she turned out to be on the piano, playing accompaniments for Tony’s hard songs. He sang the Erl King, by Schumann, which didn’t seem to me extra much, and My Friend, which was lovely. Miss Hayden asked him a lot of questions about Portugal and the music there (“Is their traditional music at all like ours?” “No, its very nice.”) She was very struck with his singing; D. says he has improved very much since September on account of the singing lessons he had been getting. I had to go back at 7 to read to Uncle E.

[Superscript: Got some interesting communications in the name of Mrs Farrington]