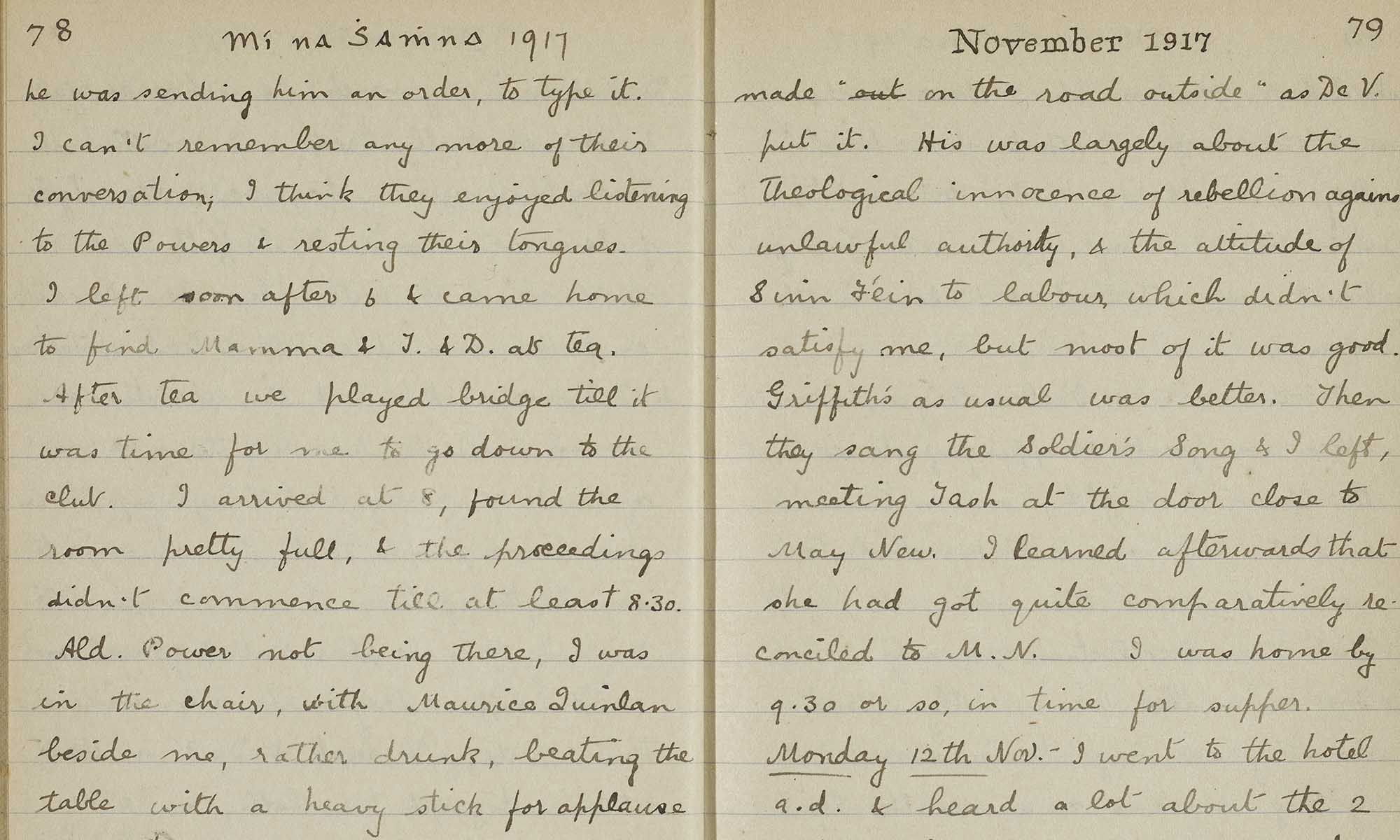 Monday 12th Nov. – I went to the hotel a.d. & heard a lot about the 2 visitors while they were there. A drunken man came in wanting to see them, but Mrs Power wouldn’t let him upstairs, & when she told them of it, Griffith said he was glad

she didn’t let him up – “these drunken men take such lenth [sic] to shake hands!” They were besieged by Redmondite mobs on Sunday night, & the Gallaghers house was attacked, & Walsh’s on the quay. I went on to a Gaelic League committee. There was great swapping of stories about the previous night; one man was said to have come to his door stark naked to repel the mob – at least that’s the recollection in my mind. The committee was mostly about dancing evenings twice a week, & getting a piano on a month’s trial.

Tuesday 13th Nov. – I visited R. Butler b.d. & took her some sugar. Mamma & I went down town after dinner, on a car, to the Metropole en route for the Six Books evening at the meeting house.

Marie entertained us alone for some time, then Mrs P. & Tash came in & we talked about accents, & Mrs P. imitated the Dublin one beautifully. We went on to the meeting house then, & people were much surprised to see Mamma. Tea upstairs of course. I was talking & Edith Bell & she said she heard Uncle Edmund headed the procession to the meeting on Sunday. Dorothea’s paper was 1st; 6 books for a desert island for life – Shakespeare, A.P. Graves’s Irish Songs, Oxford book of English Verse, some enormous Natural History, Sayings of Buddha (for meditation) & Virgil’s poems. A sensible selection for a person of her tastes. There was very little discussion of course – then Sam Bell spoke on 6

books for 2 years at the North Pole – Nansen’s Furthest North, an African Travel book by Sir F. Treves, Longfellow, Bleak House, Life of Motley, & a book of collected Thoughts. Frightful books to be confined to, except Longfellow & the last. Mamma’s were her 6 favourite books – Byron’s Poems, Morte d’Arthur, Jone’s Life, Esmond, “Dutch Republic, The Hour & the Man. She had to explain the last somewhat, & J.J. Bell had a good deal to say in praise of Toussaint L’Ouventeur. Then Charlotte read Annie’s paper on the best books she read in the last year – Silas Marner, Life of [blank space], Life of Charles Kingsley, My Days & Dreams by Edward Carpenter, The Garden of Allah. F. Walpole admires Carpenter greatly. They didn’t any of them strike one much.

F.W. said it was Alton Locke that first made him a Radical. Then I read my paper on the 6 books I want to be given – The Golden Bough, Labour in Irish History. Madden’s Lives and Times, Memoirs of the Count of England in 1675 (Baronne d’Aulnoy) Ferriter’s Poems, Amulets Talismans & Zodiacal Gems. Very little discussion of course. Grace Bell said Memoirs was the one she wd like best. Afterwards in classifying all the books, she said how shd she describe Amulets etc, – would “Fantasy” do? She supposed & so I said no, science, & they were greatly amused. It was an impudent suggestion after my concluding sentence. Tom had 6 books for a year in prison, an Irish lesson book, Macaulay’s Essays Progress and Poverty. The National Being History of Painting illustrated.

It would be prison indeed. What a powerful mind he must have. We were talking to Armitage from Newtown afterwards, & behold, he was at the meeting at the club on Sunday evening.

Wednesday 14th. – I went to the Tech in the morning & we did some enameling – I forgot if this was the old or new copper, – it must have been the old, & what I spoke of the previous Friday really happened this day. I visited Eileen in the afternoon & saw the doll she is dressing for a bazaar, & Darkey. Its always pleasant to go there, & she always has a nice tea; I believe its all the tea she has herself.

Saturday 19th Nov. – I went up to Sville

in the afternoon to ask Charlotte to our discussion evening the next Tuesday. Then I went to tea at St Declan’s & found Mettrick there paying a long visit, with a lot of books he had bought in town & was showing them. One was the Book of Artemas, which he was reading aloud. We were talking of Tom’s Conditions of Knowledge F.L. S. evening the next Tuesday week, & Mettrick says some philosophers now contend that 2 & 2 don’t always make 4. He went at about 6.30, and at about 8.45 Armitage came. He is older & closer than Mettrick, takes not so easy to draw out; & I think commoner. He told how Ernest White rebuked him for something he said abou in meeting on Mrs Gatty’s parable of the caterpillar & the butterfly, & said a good deal

about Clark & the school – seemed to admire Clark rather as a headmaster. Finally we got on politics from an article on Sinn Fein in a Labour Leader that he pointed out to us, & it was very queer how impossible it was to get the idea of nationality being worth preserving into his head. He didn’t see why you should mind where you were governed from, or feel differently to people of different nations, & of course its a great mistake for Irish trade unions to sever from English ones. Andrew Malone had an excellent article on that in New Ireland about this time. It all comes from England having never been governed by a foreign country, & Socialists being taught that nationality is an obstacle to progress, & having apparently no imagination.

Sunday 18th Nov. – Upton came in about 12.30 & stayed till dinner time. He talked a lot of De Valera (whom he calls Dev.) & Griffith etc; says De V. depends very much on Words of the Dead Chief for speeches, carries it everywhere in his pocket.  He Seamus says it is great fun making speeches. T & D. came long before he went. We went for a walk out the road a.d., it being fine but very cold & Seamus came back to tea. I had to go to the S.F. committee at 8, & when I came back at 9.30 they had just finished music, & Seamus had been reading our 6 books essays. I got mine for him, & of course he despised it. He talked about Miss Fogarty etc. She has just lost her brother from neglected measles.