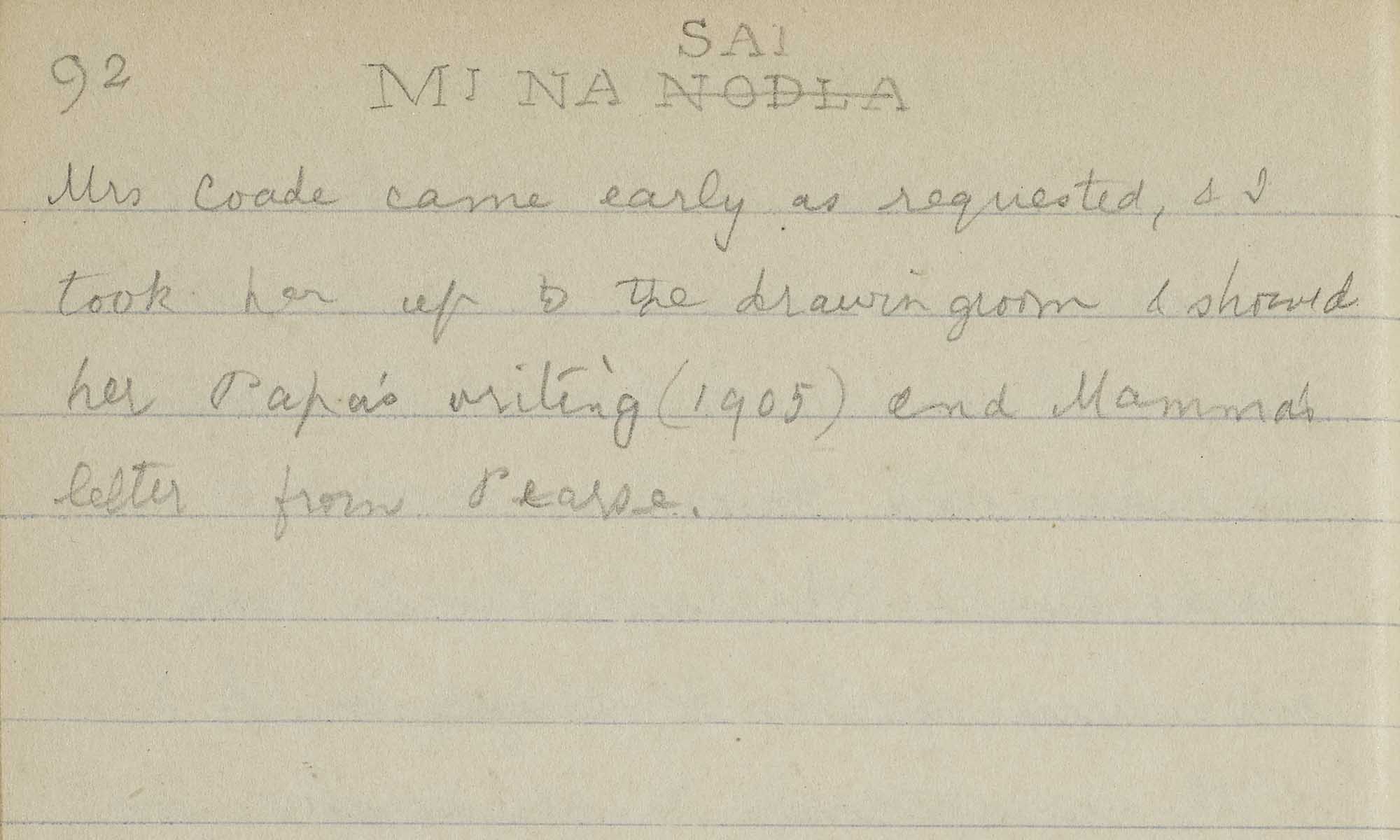 “Then Mrs Hayden read a short paper, very good, with sound stuff about the rise of the women workers in it, & a good national tone, & Dorothea gave an account of women in Burmah, illustrated with bits of The Soul of a People, which were rather loathsome in some ways. They seem very free in many ways – marriage & business – but they don’t care to be even temporary nuns, so the girls get no education, as secular schools are unknown. Without education of course they can’t be free, & they understand, the book said, that they are not capable of taking part in public affairs, so leave them alone. “

Monday 19th Nov. – I went to town in the morning & met Eileen, as I mostly do when I go to town. In the afternoon I went to the M. W.F.L. general meeting at Smith’s on the quay – tea first at great length & then a long speech by Dr Mary about the folly of taking for granted that the new franchise bill will apply to Ireland. Then Mrs Hayden read a short paper, very good, with sound stuff about the rise of the women workers in it, & a good national tone, & Dorothea gave an account of women in Burmah, illustrated with bits of The Soul of a People, which were rather loathsome in some ways. They seem very free in many ways – marriage & business – but they don’t care to be even temporary nuns, so

the girls get no education, as secular schools are unknown. Without education of course they can’t be free, & they understand, the book said, that they are not capable of taking part in public affairs, so leave them alone. Dorothea gave the impression of thinking they were perfectly all right. Then she had to go & I took minutes in the committee that followed. After tea I went to a committee lecture on the teaching of history at the League – M. Butter M. R. I. A. It was very good. Partly about the different reasons people give for not studying Irish history, & how empty they are; partly about the way to conduct classes, with plenty of local history. I was speaking to him afterwards; he is rather nice. Mr Gallagher presided, & gave a description of the way

history was taught in the Liverpool school (Catholic of course) he attended – history relating to Ireland I mean. The Irish boys used to contradict the books & the masters in class, & settle it afterwards with the English boys in the playground. I was arguing with Dorothea about women & politics on the way home, a propos of the Burmese women; she thinks they never will take half as much interest in public affairs as men do; she, herself would much prefer not to have anything to do with them.

Tuesday 20 Nov. – I went to the hotel in the afternoon, taking Pearse’s translated book to lend them, and my first aid book & bandages for Tash who was asking for them. Kitty at once seized on Pearse’s book

I became absorbed in it. She was going to Newtownbarry next day to the Rev. Mother’s fete & Tash’s version of it was that she was going there for good, to be a nun. Tash inspected the first aid book & we did some of the bandages in it & Kitty complained to her mother that we were very bloody in our conversation. I borrowed Marie’s ring to show Mr Shea; he being anxious to see some of Miss MacDermot’s work. I had to leave early, as Sean O’ Floinn was coming to tea. He came, stuffed with books, & told us that the Convention was going to burst up because the Ulster Unionist Council wouldn’t ratify the agreement of the Ulster delegates to Colonial H.R. with Ulster in it. He lent me a book of poems by Padraic Gregory that didn’t appeal to me at all.

Mrs Coade came early as requested, & I took her up to the drawingroom & I showed her Papa’s writing (1905) and Mamma’s letter from Pearse.

[Large blank space on the page]

D. and T, Aunt H, Charlotte, Mamma & Sean came up then & Mettrick arrived soon after. The subject was

Civilization over again. Tom pushed his Kinship definition & Aunt H had a lot to say, but I forgot it was everything else practically that was said. Sean enjoyed himself greatly & said real civilization wd never come as long as the present economic system continues. When we got to Punishment, after supper he made frightful revelations about the treatment he & the other boys used to get when he was at school. But he shocked Aunt H. by maintaining that you can’t teach the ordinary boy without some punishment. He said that realising the truth of the evolution theory had given him a sense of kinship with animals that he never had before which is much to his credit. Tom had to take Charlotte home, I think Mettrick might sometimes do it. It

was a very good evening, & Sean was a great addition to it.

Wednesday 21st. – Sean was asking me questions about Mettrick & Newtown school all through breakfast. He left immediately after, & I went down to the Tech. Mr Shea started soldering this day; it is awfully hard delicate work making the wire lie flat & not losing the little scrap of solder, & I couldn’t get the thing red hot at all. Mettrick called a.d. to lend me the Book of Artemas – its not so good entire as in bits, but the part about flag days is very good.

Thursday 22nd. – I went to town b.d. for tickets I met Eileen as usual. She took me for a walk out to Goff’s; we went down into the glen & visited the ponds & went down as

for as the seat opposite H. Ridgway’s house. It was lovely to be there again, but things are very neglected; the lower pond full of weeds and the flight of steps near it looks as if it had not been swept for years. It was either this day or the next that Sir William Goff died. Eileen & I were running down Rex Courtney as usual, she says his wife tells her the children must always be in bed before he comes home; he cannot be bothered with them. Dorothea & Tom paid a visit in the afternoon.

Friday 23rd Nov. – We did some more enameling with the new copper in the morning, the new green enamel on the new copper turned out pretty very well. I went to Jennings a.d. & then visited May New about the women’s meeting at

the club on Wednesday. She has the lowest opinion of Miss Skeffington, K Hicks, & everyone else as far as I can see.

Saturday 24th Nov. – I went to Miss Watt & got the ripped purple coat & skirt from her, to make up for the poor. Mamma had an awful time struggling with it. I went up to St D’s in the afternoon, and D. talked about Buddha – I didn’t know before that he deserted his wife & child to go & meditate on religion in solitude – & they told me a lot about Carpenter – having just read My Days and Dreams. A chaste bachelor like that must have had a great imagination to write Love’s Coming of Age. We discovered that D. didn’t know incest meant anything different from plain fornication. Mrs Coade told her great stories of

immortality in Protestant Ulster lately;  a prominent Presbyterian Elder in Newry having 2 establishments & seducing a maid servant etc. Nancy is still staying with Ben while scarlatina rages at the Babies’ Home. Ben wants her to chuck the work & go in for the matric. & take a science course at college – thinks she ought to have an education as well as the rest, but her views on the subject are not yet ascertained. 10 Dec