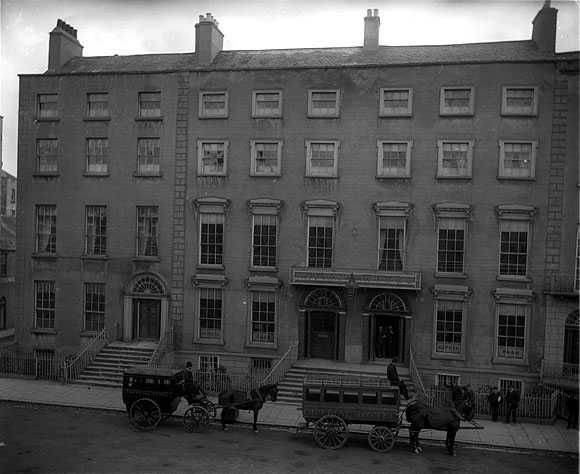 “There was some opposition in Michael St, but not much. The worst was when the meeting began; a lot of separation women were near by on the steps of the Imperial, & they made a great uproar till some Volunteers went up & chased them off the steps – not with any unbecoming violence as far as I could see.”

Monday 11th Nov. – I went to town in the morning & saw the telegram in the p.c. window telling that the armistice had been signed. The Protestant church bells rang beautifully, & a less agreeable feature of the official rejoining was the appearance of flags, largely Union Jacks, on ships in the river, & in

the hands of separation women. After tea Mamma & I paid a visit at the Walpoles’ but I had to go down to the club for a while in the midst of it. There was bonfire at the end of St Alphonous Rd, & a band going about the town with followers giving the old Redmondite yell. Mr Walpole agreed with us that the Allies are showing up badly so far, & that their victory is to be regretted – I think he agreed that no victory on either side would have been better. Katie goes down now to sell tea etc to the soldiers at the Central Hall; she was there that night.

Wednesday 13th. – I wrote a lot of my essay these days – too much, as I found when the instructions form At Cliat came, limiting it to 6000 words. I visited Charlotte a.d., & she told me how Rebecca is going to give an evening on some very modern little English poets that I never heard of

I tried to talk about old Scotch ballads, á propos of the Grace’s book that I borrowed from her a few days before, but I couldn’t arouse any interest.

Thursday 14th. – This was the day Simon was lost till tea time, & also the last day Tiger Murray was seen. He was in here in the morning & his family never saw him after. It was only a degree better than losing Simon, he was such a charming kitten & wd have been a splendid cat.

Friday 15th. – There was an election committee in the evening, which arranged for a meeting on the Mall on Sunday to start the campaign. I volunteered to find women to go in the waggonette – they will be much more respectful to women from this out.

Saturday 16th Nov. – Fine day. I went about the town in the morning to Miss Skeffington, Miss Doyle, the hotel & Mrs Phelan, but only the first 2 wd come in the

waggonette, & nobody wd speak. Mrs Power had influenza, & I sat a long time with Tash in the back of the hall, talking. A honeymoon couple came in & went upstairs while we were there, & she remarked on the silly ways & awkwardness of such. I said it was partly a feeling of being in a ridiculous position that briderooms have, by a sort of masculine convention of the that marriage is state of being caught for a man, & she agreed.  She was very ferocious & profane about the peace rejoicings. I had by this got my Technical school prizes. The Gaelic State by Darrell Figgis & 2 vols of Macaulay’s history of England, & I was reading a lot of the latter. [Short hand text here]

Sunday 17th Nov. – They came to dinner & I went down to the club a.d. & shepperded Miss Skeffington & Miss Doyle into the waggonette. There was noble procession, with our band & crowds of Volunteers.

We went out Parnell St & up John St & Broad St & back by the quay to the Mall, where the meeting was held. There was some opposition in Michael St, but not much. The worst was when the meeting began; a lot of separation women were near by on the steps of the Imperial, & they made a great uproar till some Volunteers went up & chased them off the steps – not with any unbecoming violence as far as I could see. P. W. Kenny took the chair & spoke, also Dr White & Butler, & I, very briefly. The opposition broke out again when I started, knowing they could easily drown me. The meeting wasn’t very long, but it was much bigger than our opening meeting the last time. Kenny spoke very well. Tom was at it but I couldn’t find him going home. After tea I went back to the club & the drawing for Pearse’s portrait was got through at last, and Wheeler who was there gave us a very good address on canvassing

& on the sad state of the town of Wexford, where he is now, which seems to be worse than we were last march.