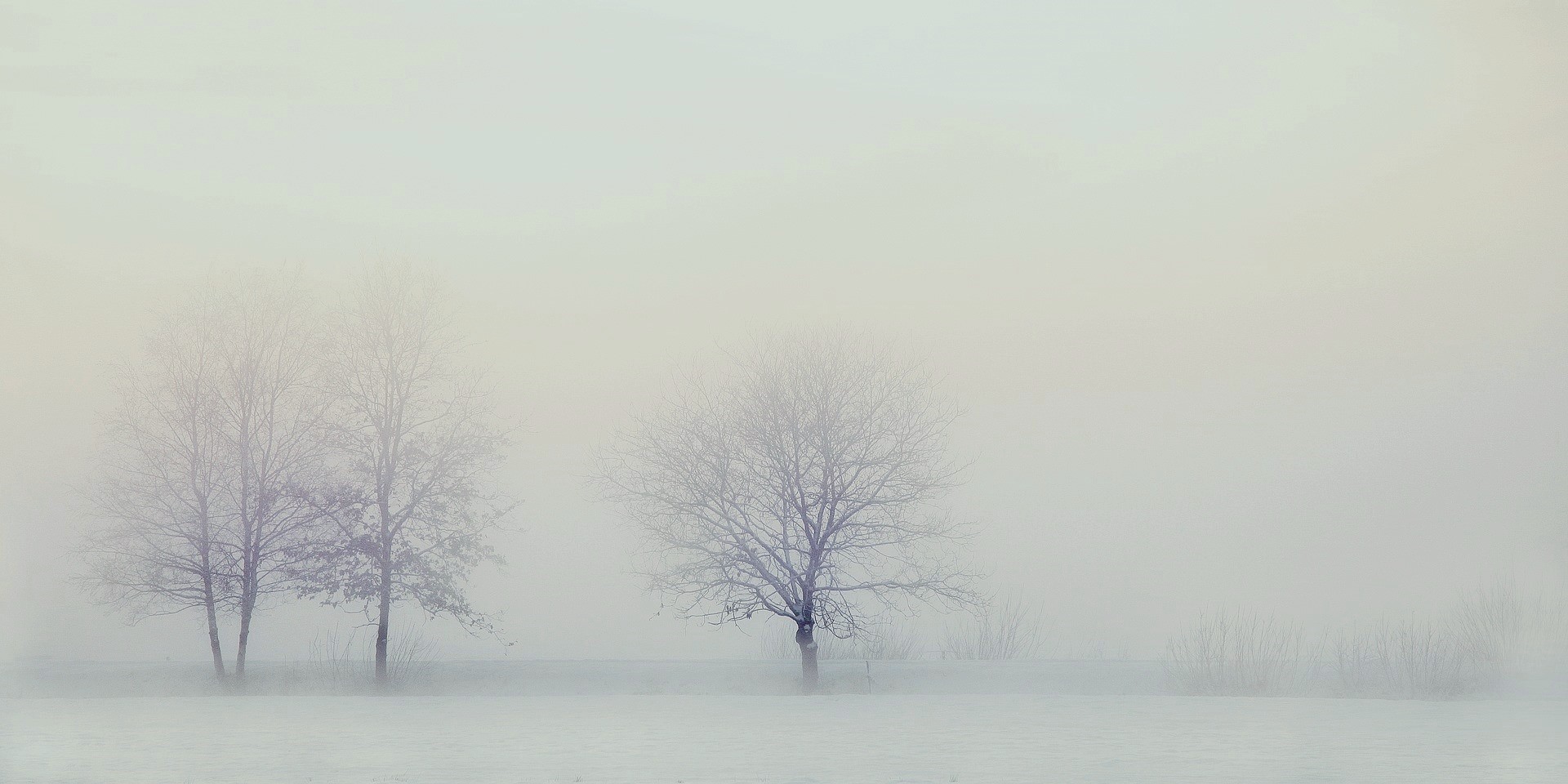 “The evening was Fr O’ Flanagan’s big meeting; Brazil, who is the only man that ever thinks of getting women into the foreground, found that Miss Hoyne the organizer wd go in the waggonette, & introduced me to her, & we had a great evening. There was a noble procession, with torches, & we went around the quay to the hotel, Brazil in & out of the brake, regulating the volunteers when he was out, & waving a flag & whooping with a perfectly grave face when he was in.”

Wednesday 27th. – I went to the Tech in the morning & the club in the afternoon, & found Whittle wanted me to go to Át Cliat again the next day. I got off to entertain Grace Bell, Sarah Rodgers, Ruth, & Eileen Dwyer who were all coming to afternoon tea. Ruth pottered about & investigated things sternly, but didn’t cry. Sarah looked nice but spoke little. Grace & Eileen did talk, & E. stayed after the others had gone & talked about Hilda etc. Hilda is coming with George & the baby for a while before going back to Canada.

for tea, & the leaflets were terrible heavy to carry. Tom went to meet me, but the train was early & he missed me somehow.

Friday 29th. – I went to the Tech in the morning & did some of a 2nd Sinn Fein ring, & spent the afternoon at the club. The evening was Fr O’ Flanagan’s big meeting; Brazil, who is the only man that ever thinks of getting women into the foreground, found that Miss Hoyne the organizer wd go in the waggonette, & introduced me to her, & we had a great evening. There was a noble procession, with torches, & we went around the quay to the hotel, Brazil in & out of the brake, regulating the volunteers when he was out, & waving a flag & whooping with a perfectly grave face when he was in. D. Grant remarked that Paddy Brazil was a restless spirit. The more I see of Brazil the better I like him. Fr O’Flanagan,

Stephen O’Mara (a handsome energetic looking young man of the type that has black hair, blue grey eyes with black lashes, & a clear rather pale complexion) & Ald. Quinlan got in at the hotel; the latter occupying the place where both J.K. Walsh & Grant had been, & I was squeezed up between him & Gallagher, but I had Stephen O’Mara opposite me. Fr O’F looked smooth & fresh & placid as usual. We proceeded by Broad St to the Mall amid a solid crowd as far as the eye could reach, torches blazing everywhere & flags out of lots of windows. It was gorgeous. Fr O’F. was the principal speaker, though S. O’Mara preceded him with a few words to men with a stake in the country like himself, & on the necessity of watching the ballot boxes & making it a dry wake. Fr. O’F. began in understandable Irish, apologised for what he said about Redmond, & made an admirable speech abou  nearly an hour long, in an admirably easy natural audible voice. His voice is a great asset to him. Perhaps there were a thought 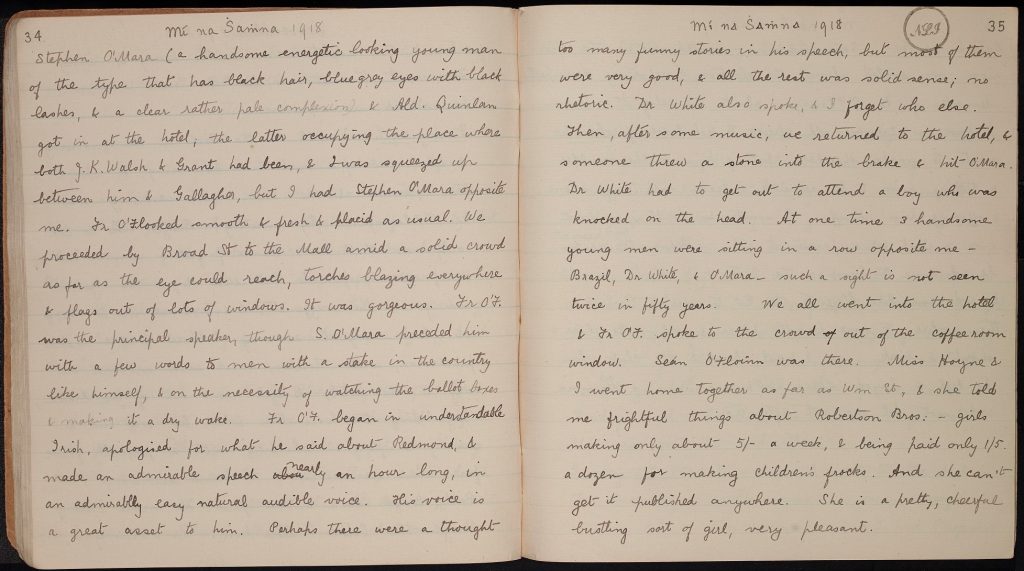 too many funny stories in his speech, but most of them were very good, & all the rest was solid sense; no rhetoric. Dr White also spoke, & I forget who else. Then, after some music, we returned to the hotel, & someone threw a stone into the brake & hit O’Mara. Dr White had to get out to attend a boy who was knocked on the head. At one time 3 handsome young men were sitting in a row opposite me – Brazil, Dr White, & O’Mara, such a sight is not seen twice in fifty years. We all went into the hotel & Fr O’F. spoke to the crowd of out of the coffee room window. Seán O’Floinn was there. Miss Hoyne & I went home together as far as Wm St, & she told me frightful things about Robertson Bros: – girls making only about 5/- a week, & being paid only 1/5 a dozen for making children’s frocks. And she can’t get it published anywhere. She is a pretty, cheerful bustling sort of girl, very pleasant.

Saturday 20 Nov. – Seán O’ Floinn visited us in the afternoon, very excited about the election, & reporting disrespectful remarks of Fr O’Flanagan about the relief it is to him to have no tiresome old clerics to ask leave of when he wants to make speeches – patting him on the shoulder & telling him to be sensible & leave such things alone & offering him snuff. I sometimes doubt if he was even meant for a priest at all. Seán also said he wd come to town on the 28th, & if White shd win, he wd run like blazes to the P.O. to wire to Carrick & then retire to some private place & roll on the floor & shout & kick. I went back to the club when he left, & stayed till 6. Pouring rain & Mamma wd not let me out after tea.

Monday 2nd. – In bed all day, and the same Tuesday and Wednesday. T. gave his evening on the need for ed adult education on Tuesday evening & lent it to me next day, & it was admirable. There was a S.F. meeting up at Klondyke on Wednesday night, but the procession didn’t pass us going either way. My throat got bad on Wednesday night, and the next ^day I got a letter. I did some of my essay on Friday and Saturday, as I couldn’t go out. Mamma got the cold then.

Sunday 8th Dec. – Fine day. I went to the club in the morning & wrote names in canvassing books with a lot of other women. D. & T. had Professor

Stockley staying with them, so didn’t come to dinner. I went to the Club in the afternoon & Dr White introduced me to Robert Davitt, a very nice looking blackhaired pleasant young man. When the I went with the procession as far as the hotel & paid a visit there. Tash had a sore throat & had had ulcers in her stomach & was very wretched & pessimistic about the election. Seán Lane was doing his best to cheer her up, telling her what a fine meeting it was on the Mall. She had seen the Redmondite procession going by, & said it was bigger than ours. Mrs P. & Kitty went to the meeting. I sat with Tash a long time & she told me stories  about the Coolayna boys & talked about Nancy.

After tea I visited at St Declan’s. Stockley was very nice & interesting, he spent a long time in U.S.A. and talked very feelingly about the treatment of negroes there, & told about how he was shipwrecked off

Labrador on one voyage, & about the disgusting bad management of ocean liners – only boats enough for half the people on board; everything sacrificed to competition in speed. He also talked about his colleagues in Cork. Daisy, the kitten, was there all the time & was lovely.