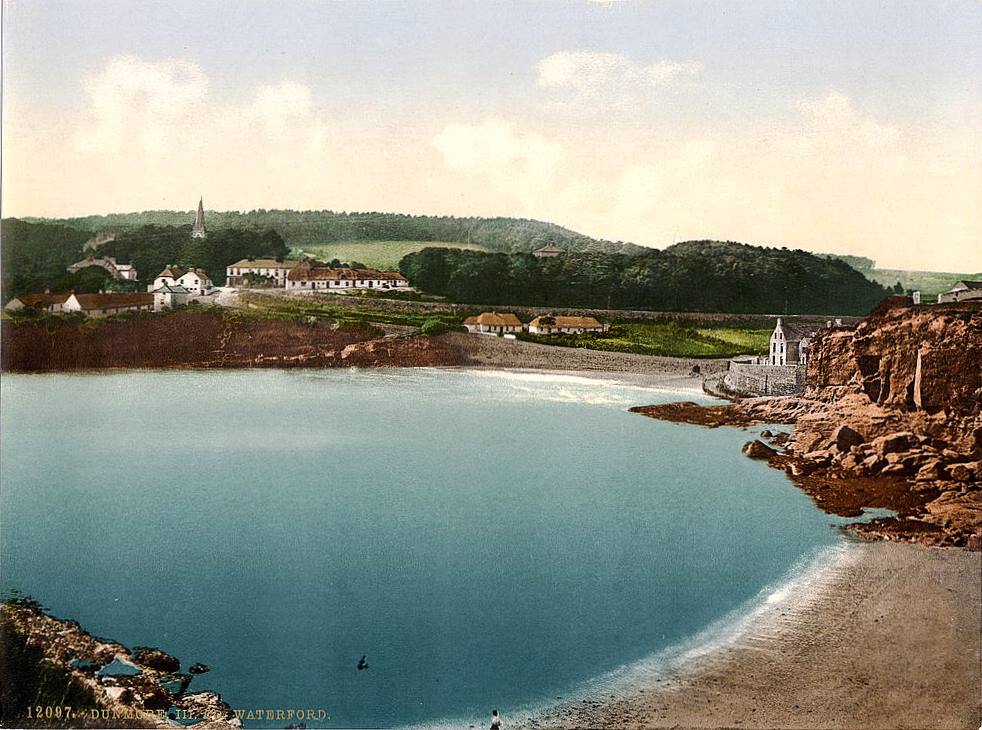 “After tea I went to a C. na mb. meeting & was overjoyed to find they had written to Át Cliat asking to be let off from the flag day because they thought it would inflame the Redmonites & cause violence & injure our chances at the next election, & anyhow only 6 were willing to sell. They seemed poor reasons to me, & unlikely, except the last, but I was just as glad. They had got no reply yet, so there was to be another meeting the next evening.”

Whitmonday 9 June. – A very windy day & not very warm. All Newtown school came out on an excursion; also the carstand Powers in their trap, & they brought Aunt H. with them. She was to stay here a couple of days. The Powers went bathing, and came spent most of the afternoon in this house, being shown over it to their intense interest, and having tea. They were very enlivening, and left a lot of food after them. Mr P. got hold of Tom and talked a great deal with him, about old Waterford, I think, his daughters not being there to interrupt. They went at about 6. Aunt H. brought plants to plant in the little beds, one of which indeed she made herself the next day.

Tuesday 10 June. – I went for vegetables early. Tom went in to town. A Mrs Bannon came to

look at the house; she has a husband & 8 children, & decided to take it for August. I cycled in to town in time for dinner & spent the afternoon at the Tech, nearly finished the copper pin and starting a ring with 3 opals. After tea I went to a C. na mb. meeting & was overjoyed to find they had written to Át Cliat asking to be let off from the flag day because they thought it would inflame the Redmonites & cause violence & injure our chances at the next election, & anyhow only 6 were willing to sell. They seemed poor reasons to me, & unlikely, except the last, but I was just as glad. They had got no reply yet, so there was to be another meeting the next evening.

Wednesday 11th. – I spent the day at the Tech labouring at a gold ring with a monstrous amethyst.

for the carstand Powers. The gold was an old pair of spectacles that they had, & it was the devil to work, hard & unyielding & yet brittle. I had to make the back plate & collar of silver, & when it was done, the gold had lost nearly all its colour & looked like some very inferior metal. I took it to them after tea & they laughed at it & paid me 3/6. I should say Eileen, not “they”. I went to the C. na mb. meeting and found it going on outside the door in Gladstone St, & they had got a dispensation from Át Cliat in consideration of the nature of Waterford, & I suppose will be despised for ever.

Thursday 12 June. – It poured rain all day so I couldn’t go out & neither could Tom till it cleared up late in the evening. I had a rather interesting article on the glacial period in Britain to read to my uncle out of Once a Week.

Friday 13th. – Fine bright day. I went to town for various things, & met Matthew Butler, who told me 3 convents have sent emissaries to him to ask what sort of the history questions at the feis will be. I cycled out to Woodstown then. We went down to the south end of the strand, & D. told us how her family used ride up every hill they met as a matter of course & were awfully ashamed if they ever had to get off for anything. Maybe they might have had less ill health if they had been a bit less proud. They all went in in the motor a.d., to take Aunt H. home & for T. & D. to go tend their garden. I took Louis up the Passage road in his pram & it was very hot. He was pretty good most of the afternoon. Mrs Kinsella had got very fond of him. D. & T. came back to tea.

Saturday 14th June. – A lovely fine day. We went to Knockavelish wood in the morning & out to the end of the head. There was a lot of woodruff in flower, I don’t know any place where it is so plentiful. The place was looking exquisite. The tide was out, so we went down from near the end of Knockavelish & walked back across the strand. It was quite firm nearly all the way, with an inch or so of tepid water over & was lovely walking. In the evening w afternoon we went to the beechwood & stopped there a long time. The oxeyed daisies & orchises were coming out & the fields were a dream. After tea we were sitting on the strand & I lost Mamma’s lovely little pointed scissors & never found it again.

windy. The Powers came out, & cockled, the tide being out, and Brother Gerald of the De La Salle came out for a swim, but got none. He took great interest in a little bird – a sandpiper or something like it – that was flitting about on the strand. We went up baile glan hill in the afternoon. It was very windy but the views on both sides were gorgeous & there were foxgloves coming out. The ship that was wrecked near Dún Mór two years ago, the Hermione, had nothing left of her above water but 2 little sticks, so the theory that the moaning sound we used to hear was the wind in her hausers [sp.?] was exploded. I learned that both Dorothea & Ben thought I was not enjoying myself at that party at Waterloo Place on the 20th April 1914. I suppose I must have been quiet and silent. I hadn’t much chance to

be anything but a spectator. We went home down through a lovely wood paved with wood sorrel & out at the gate of “Mt Alts” onto the road near the south end.