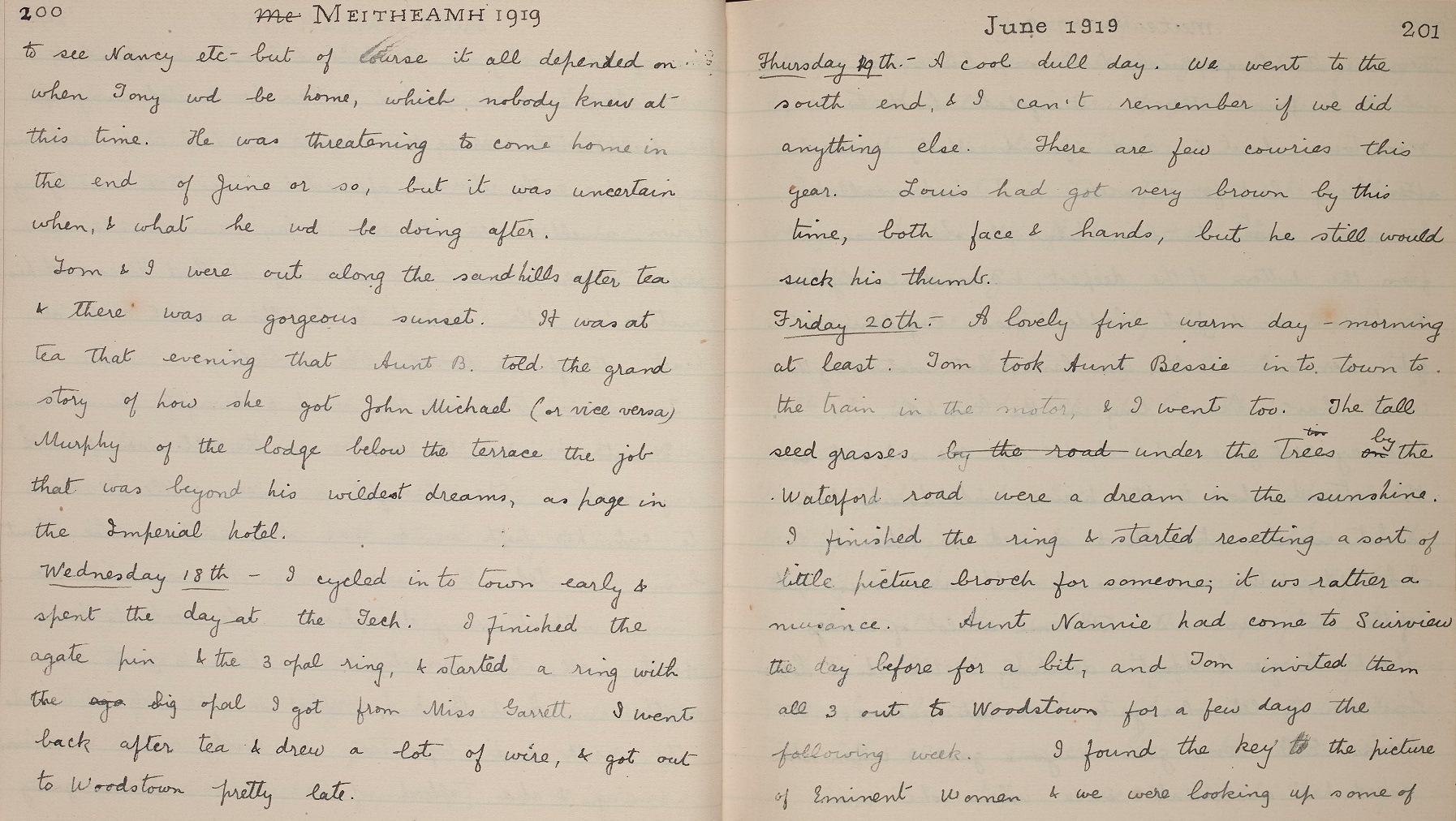 “D. [Dorothea] told me a lot of things about George Goldfoot’s dentistry & the Aunt Lottie’s objection to let her go to a dentist alone. It seems G.G. never gives anyone gas, & when she asked his assistant once when she was getting a tooth out, wasn’t he going to put anything on it, he said with an air of great surprise “Oh, you want a painless extraction?”

Monday 16 June. – Tom went into town. D. had a bad night with Louis & was tired, so I slept with him that night & she slept in my room. L. required his bottle at about 4.15 a.m., which disorganised his hours for the whole following day, but otherwise was good, though Mrs Kinsella & Emily were convinced he would not tolerate me. He even smiled when I attempted to sing to him after he had his feed.

Tuesday 17 June. – Fine day, fairly warm. There was a new young bull in the field with the cows opposite, & this morning he began roaring in a sullen hollow way & churning up the ground with his hoof as if he wanted to slaughter someone, so that D. & I

were afraid to stay in the field & Emily was afraid to walk along the road past it. Then he lurched away up the field still roaring & swinging his tail in a threatening way, & presently returned, approached a cow that was lying down, smelled her all over, & lay down beside her in perfect peace & contentment, having at last discovered his mother! He seemed to be the nearest child at heart, though he looked like a bull. Tom was in town all day, & brought Aunt Bessie out with him in the motor in the afternoon, for a 2 3 days visit. She brought a nice rattle to Louis to cut his teeth on, & was very enthusiastic about him – wanted to have him in her arms all the time without any discretion. He took to her pretty well, but sometimes wanted to go to his mother. Aunt B. & I walked on the strand towards the north end before tea; a lovely calm Woodstown evening, & she talked of her holiday plans – going

to see Nancy etc – but of course it all depended on when Tony wd be home, which nobody knew at this time. He was threathening to come home in the end of June or so, but it was uncertain when, & what he wd be doing after. Tom & I were out along the sandhills after tea & there was a gorgeous sunset. It was at tea that evening that Aunt B. told the grand story of how she got John Michael (or vice versa) Murphy of the lodge below the terrace the job that was beyond his wildest dreams, as page in the Imperial hotel.

Wednesday 18th. – I cycled in to town early & spent the day at the Tech. I finished the agate pin & the 3 opal ring, & started a ring with the ag big opal I got from Miss Garrett. I went back after tea & drew a lot of wire, & got out to Woodstown pretty late.

Thursday 19th. – A cool dull day. We went to the south end, & I can’t remember if we did anything else. There are few couries this year. Louis had got very brown by this time, both face & hands, but he still would suck his thumb.

Friday 20th. – A lovely fine warm day – morning at least. Tom took Aunt Bessie in to town to the train in the motor; & I went too. The tall seed grasses by the road under the trees in on by the Waterford road were a dream in the sunshine. I finished the ring & started resetting a sort of little picture brooch for someone; it ws rather a nuisance. Aunt Nannie had come to Suirview the day before for a bit, and Tom invited them all 3 out to Woodstown for a few days the following week. I found the key to the picture of Eminent Women & we were looking up some of

them in the biographical dictionary, but most were not to be found there. I cycled back to Woodstown about 8, and found Matty restored after being lost for a week. D. had called her again near at the lime kilns, & she answered from the bottom of the deepest, & D. and Emily had to borrow a 16 foot ladder from Coghlan’s to get her out. She was lame, but not very thin; can’t have been long in the lime kiln.

Saturday 21st June. – A lovely hot day. We sat out on the strand close to the house, and Louis had a hot sand sitz bath & seemed to like it, & I bathed, & the sea was as cold as ever in spite of the hot sun. D. told me a lot of things about George Goldfoot’s dentistry & the Aunt Lottie’s objection to let her go to a dentist alone. It seems G.G. never gives anyone gas, & when she asked his assistant once when she was

getting a tooth out, wasn’t he going to put anything on it, he said with an air of great surprise “Oh, you want a painless extraction?” Tom came out in the afternoon & he & I had a lovely walk in the fields & the bech wood a.t. a perfect evening.

Sunday 22 June. – Cold windy day. Louis showed an increase of about 5 oz. I took him a long walk up the road behind Coghlan’s in the afternoon.