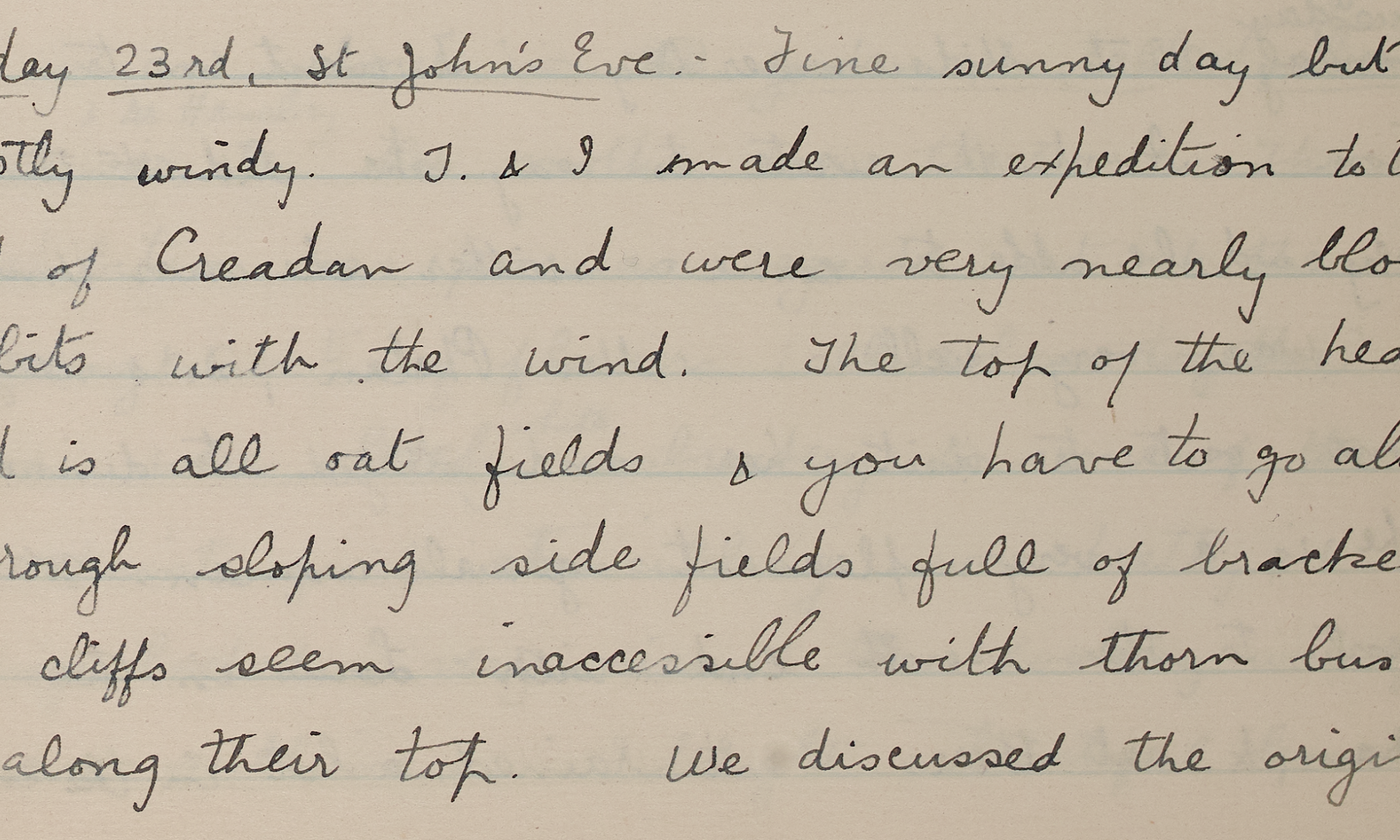 “I spent the afternoon & evening at the exhibition except when I was having tea with Miss Cutlar at St. Declan’s. They had it in an arbour in the garden, & talked about the war etc. Her mother was there. The exhibition was poor as regards art & the arrangement of flowers (all colours together) but there were lovely white embroidery & some of the pen painting & stenciling was pretty, & my things looked very nice, & the cookery was of course sublime.”

Monday 23rd, St John’s Eve. – Fine sunny day but beastly windy. T. & I made an expedition to the end of Creadan and were very nearly blown to bits with the wind. The top of the head-land is all oat fields & you have to go along the rough sloping side fields full of bracken. The cliffs seem inaccessible with thorn bushes all along their top. We discussed the origin &

use of modesty but couldn’t exactly get to the bottom of it. We came back around Knockarelish, which is the only right way. The sea was full of white horses. We found D. had a letter from Tony by the afternoon post, saying he was paid off – the company evidently closing – and was coming by the first ship he could get. We made a bonfire on the sandhills that night, but it was so cold we couldn’t stay to see it burn down.

Tuesday 24th, Midsummer Day. – T. went in to town. Aunt H. wrote to say she didn’t think they wd be able to come – neither she nor Uncle E. was very well. Mrs Phelan, D.’s neighbour came out to visit her and stayed to dinner. She is a very pleasant genial woman. We went to the south end with Louis in the pram, & sat there. It rained a lot in the evening.

Wednesday 25 June. – Wet all the morning. I cycled in to town in the afternoon & went to the Tech & prepared my things for the exhibition. I went to the club committee in the evening & heard about the suppression of the meeting the night before, & how Gallagher as usual got hurt.

Thursday 26. – I spent the afternoon & evening at the exhibition except when I was having tea with Miss Cutlar at St. Declan’s. They had it in an arbour in the garden, & talked about the war [Superscript: & Dr. Henabry] etc. Her mother was there. The exhibition was poor as regards art & the arrangement of flowers (all colours together) but there were lovely white embroidery & some of the pen painting & stenciling was pretty, & my things looked very nice, & the cookery was of course sublime. I bought a beautiful lemon

jelly with pansies in it. Tash bought my agate pin & Seán Lane my second carbuncle pendant & that was all I sold. Selling was poor altogether, Miss Courtney was complaining bitterly. One of the best things there was Miss Dunphy’s gorgeous illuminated remarks on Dr Henebry, a present for Coláiste na Rinne.

Friday 27 June. – Spent all afternoon & evening at the Tech. Nothing doing. I brought 2 stencilled hat ribbons. Protestants don’t seem to attend the exhibition much, in fact few seem to know about it. People admired my things very much, but that was all.

Saturday 28. – I went to Cappaig early to do the history exams for the feis. Brighid met me, with a little niece called Betty, from Australia, who did not attract me, and took me to the Green Schools where she left me. Seán Ó Floinn ws presiding over the

Rinn scholarship exams, & he gave me the juniors to examine in the other room – all girls, including the Rinn scholarship competitors. He said some boys had been entered for that but they didn’t turn up. As usual the first kid was the best. I left the questions for to be applied to the seniors in the afternoon, & went back to the Dowley’s, where B. gave me a most gorgeous dinner with strawberries & chocolate biscuits & tea, but my pleasure in the strawberries was damaged by seeming the monstrous lot of them that Betty was allowed to eat. Her mother is over too, but not [Superscript: We agreed that killing Hunt ws very excusable. B. gave me a shocking account of the spoiled state of Seamus O’Muirchadha]  in Carraig then. Mrs Dowley was there, very nice as always. There are great crowds of books in that house. Brighid asked me down some day the next week, & went with me to the afternoon train. Tom met me, with the motor at the office, & after picking strawberries & doing other work in his

garden, we went out to Woodstown. I drove part of the way, & found the steering gear stiffer than it used to be. I found D. approved of Aunt Nannie, and did not find her so forgetful at all. We went to the south end after tea, & heard a lot about the Farrington holidays at Eotaill [sp.?] when they were kids & how they used rush out as soon as they got there to look what kids were there to play with, & be out all day & every day, playing. I wonder were the kids just the same as the sort that used to seem so beastly to Tom & me. The idea of imaginary balls, & drawing pictures of the girls in their dresses, seemed very extraordinary to D.

Sunday 29 June. – Fine day but windy. The carstand Powers came out & we had tea with them out on the sandhills soon after dinner. They were as lively as usual and Louis was very good with them. They, a propos of his second name, said

maybe he wd grow up a Unionist & I said perhaps he wd call his son Kitchener, at which the intelligent child began to cry. We went down to the village & up the road behind Coghlan’s after tea; it was a lovely Woodstown evening. D. was talking about her schooldays & how most of the children cheated at lessons & it used to disgust her: I wish my conscience were clear in that respect, & I consider myself an honest person, as Wolfe Tone reckoned himself a sober man. But then D. went on to tell of flirtations of Connie Bowes’s, & how she when she had something of the sort to tell Connie, embellished it a little to make it a better story, & that’s where my honesty comes in; I’d never do that. I suppose it wd be impossible for a Cork person not to. Afterwards at supper, D. was going over the whole story of Ben & Charlie Murphy, which is always delightful, & saying what a boor C. M. used to be

with bad table manners, which I cannot realise. She said more about her Uncle Willie than I ever heard before, it seems he was very like Stephen. It seems Maud has reformed Stephen from his disreputable ways into singing regularly in the Presbyterian choir, confound her. He does not seem able to withstand her conventionalizing influence.