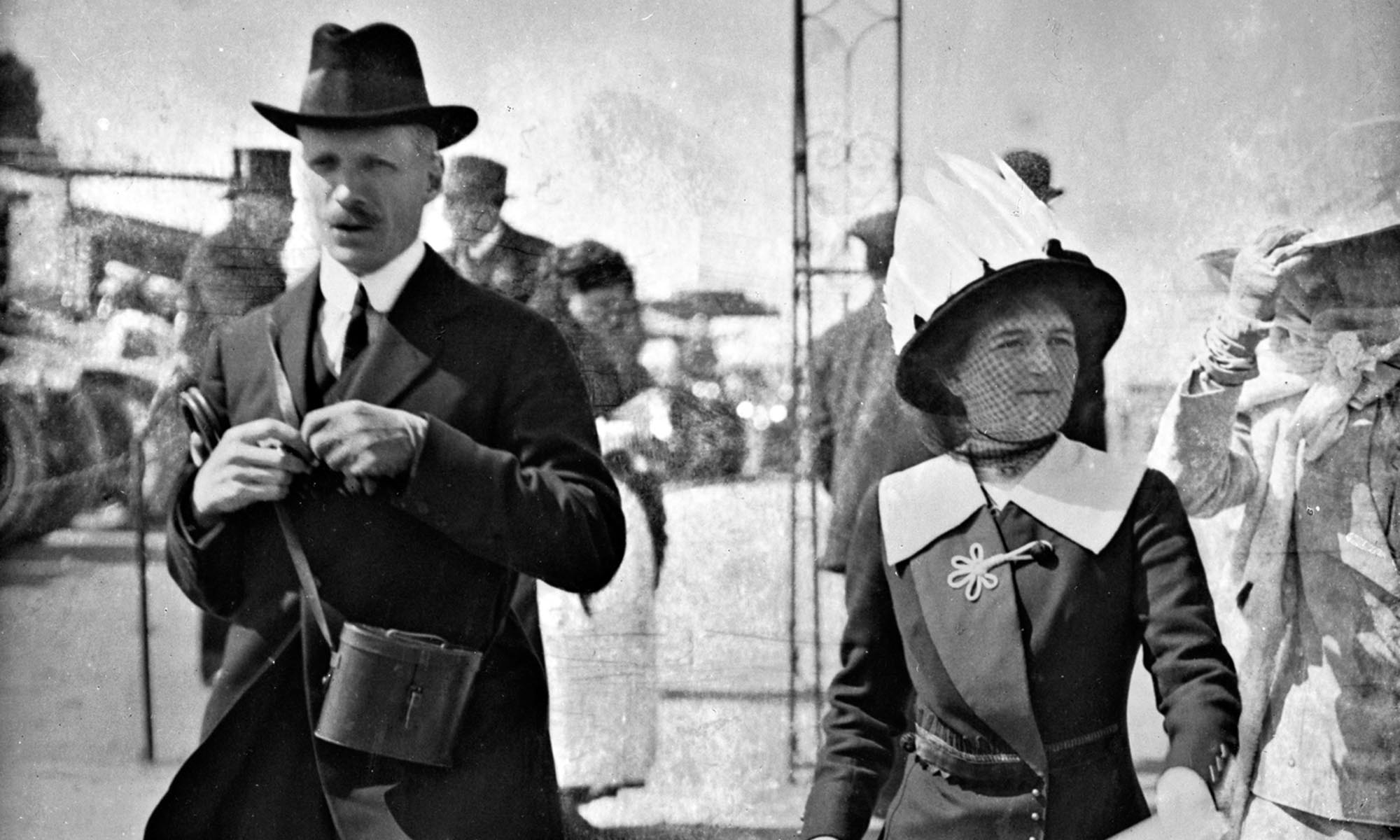 Monday 26 Nov. – I went to town in the morning & to Tramore by the 2 train to visit Bessie, I found her & her mother, with Hilda, her 2 daughters and Dolly, all sitting round the fire. Dolly, & afterwards her father wanted to attack me about Sinn Fein, but

Bessie objected, saying it wasn’t fair, & most of the afternoon they spent discussing wedding arrangements, Mr Hill sitting by the window & saying, “Change the subject. Change the subject, I’d rather be talking about Sinn Fein.” He is totally uninterested in the wedding – 11 Dec – & Bessie must order the bouquet & the photographer & goodness knows what else. The time was not fixed – 10 or 12.30. Bessie is to have a pink dress & a black hat. Johnny can’t come, & Sam probably won’t. I heard a grand story about Helen Jacob & Johnny, the night before Dolly’s wedding. I paid Bessie for her raincloak & the 2 blouses I got in September. Mrs. H. was playing. “Fly away Jack! Fly away Jill!” for the children & I couldn’t see how it was done, to the

intense amusement of all. Hilda and Dolly came back in the train with me. Dolly seems to be surrounded with Sinn Feiners & Gaelic Leaguers in Dublin. I visited the Powers & they had a friend from Kilkenny at tea with them. They took her to the train & their father talked to me about the food supply. Forms have been sent from the executive in Dublin to be filled with information regarding the supply of wheat, potatoes etc here, & its hard to do it. The girls told me more of the talk after I left on the 11th – De V. & his sword etc – & said Griffith took no more interest in me after I complained of Meagher’s oratory. I got a letter from Tony this day, he has been laid up more than a month with an abscess in his leg – now he was better, but said he can’t garden, boat or ride, & evidently was

having a very dreary time.

Tuesday 27th. – I went down to the meeting house at 5 to help Dorothea with the tea. Katie was there too. [Superscript: Mamma came, & walked home] It was a very nice tea but a lot of it was left as they attendance was not very good. Milly, Dolly and Bessie were all there, looking very well, but I fear they were bored with the essay. It was tough enough to me, & I would have been much more at sea if I hadn’t heard it before in B. Russell’s book, of course. It was all examining how we can be sure of knowing anything, & the difference between universals & material things. J. J. Bell spoke rather angrily in the discussion, saying a lecturer shd consider his audience, & go by steps instead of by impossible leaps but Sam Bell & F. Walpole both seemed to have been interested & to have enjoyed

it. F.W. spoke for at least 15 minutes. D. said Orientals were better at this sort of thing & stamped on J.J. B., saying if people couldn’t understand when the very beginning was presented to them, what was to be done? I left before it was over & heard complaints from Bessie in the cloak room about the doings of “those 2 shameless women behind me” – they trampled on her letter [sp.?] & took the stomach out of her purse & stole ‘all her money’. They said Tom was a great man. I came in for about 20 minutes of the class of the League. The plump-faced blackhaired student was put on to give a lesson on a picture of a bull chasing a boy, & did it very well. He has improved enormously.

Wednesday 28th.  – I went to the Tech & we did more soldering. The brooch goes on

very slowly. In the afternoon I went to the hotel & had tea there. Mrs Power abusing workers & the poor in general, because of the bad behaviour of Alf etc, & the Sanitary Authorities summoning her because some of her tenants in Carrigeen Lane prefer using an insanitary old closet to the new one she built them. Tash was very angry at the idea of different rules for men & women in the S. F. club. I wish she cd have gone to the meeting. I went & brought E. & J. Power to it & we started at 8.30 with a full room, but more came in until 9. I had to take the chair & do it all, of course. We decided the female subscription to be 6′ a month, age limit in future 18, study the policy 9.30 Thursday evgs, ask if we could be drilled somewhere, & rooms closed at 10.15. I pointed out that the reading room would of course be open to all till 11, & the respect-

able grown up section disapproved  of me. They wd like to have all women forbidden the neighbourhood after 10. Wish to God the girl would be got to speak out more.

Thursday 29th. – I read a lot of the Perfect Way which Mrs Coade lent me; it is very interesting though tough, & more inviting & reasonable than any religious system I have read of. The part about the great pyramid’s probable purposes & use is especially interesting.

Friday 30th Nov. – Damp day. I visited D. in the afternoon. Grace Bell & Charlotte were both there; greatly struck with Mamma having been at 2 F.L.S’s running. I stayed to serve tea & told Dorothea A. Kingsford’s idea about the pyramid, which interested her. J. was sceptical. We are reading The Threshold of Quiet, which D like greatly, & we don’t care for much.

Saturday 1st Dec. – Tom & Dorothea went up to At Cliat for a few days; T having business there.

Sunday 2nd Dec. – Fine cold day. T. went to visit R. Butler in the morning. She told me tales of villainy of Herbert Goff. Refusing to sell any more milk to the Donovans because the children did some harm in the plantation, so that they have no means of getting milk nearer than the town, & that with no warning whatever – also taking bundles of sticks gathered  in the Glenville from the children & throwing them into the river. She says the one who was killed in the Boer war was much preferable.

I went to the S.F. committee in the evening, & reported all that was arranged on Wednesday night. They were pleased to hear of the girls’ wish for drilling, & said they wished the men had that much spirit.