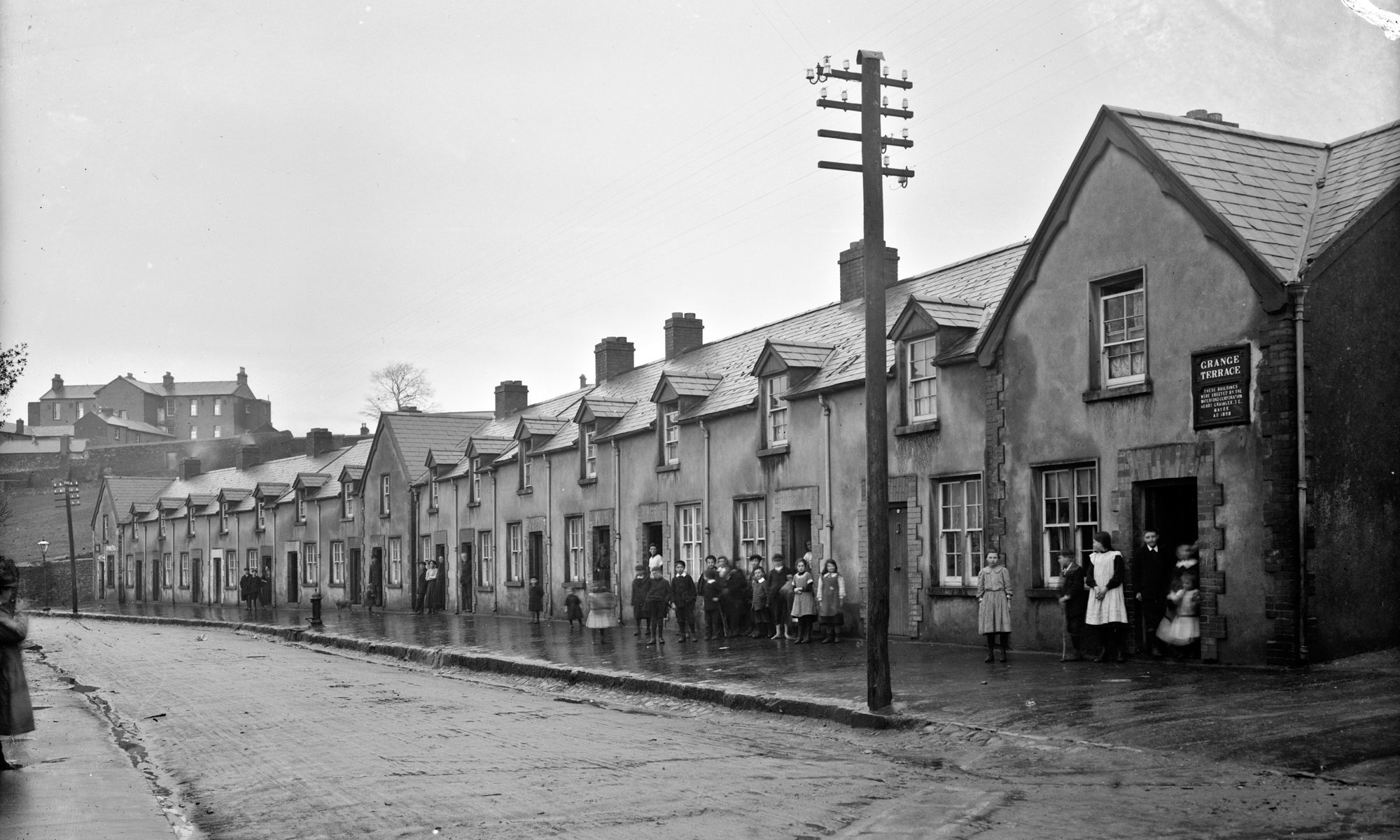 “Tash came to afternoon tea, and Nancy too, so that they could see each other. They talked about houses, and Nancy scorned Waterford because there are not enough houses built here, & also scorned the notion of any distance being too far to walk to work. She told us more about her house than I ever knew before; it must be a frightful place, with a pump opposite the hall door, & no other water.”

Monday 27th. – Seán stayed a long time writing notes of his speech the night before for the papers, but finally went. Aunt M. went off early too. I went to town and to the Tech. Tash came to afternoon tea, and Nancy too, so that they could see each other. They talked about houses, and Nancy scorned Waterford because there are not enough houses built here, & also scorned the notion of any distance being too far to walk to work. She told us more about her house than I ever knew before; it must be a frightful place, with a pump opposite the hall door, & no other water. Mrs Power seems getting on very slowly. Tash went pretty early & Mamma went to lie down, and Nancy talked about theosophy & rein-

carnation & spiritualism. She has been going to theosophist lectures in Cork.

Tuesday 28 Jan. – Cold sunny day. I went to read the National Being with Annie, & then visited R. Butler. She was pretty well & Sporty looked lovely. Then I went to St Declan’s to take Louis out, and Miss Elmes let me walk him up & down in the garden. His pram had gone to have the handles lowered. He was asleep most of the time. After 50 minutes I have up, but he wasn’t as heavy as D. and Nancy had led me to expect. Mr Shalloe had an interview with him over the hedge. Miss Bowman, Aunt H, Mamma & I all went to the essay meeting in a covered car. Nancy was there, but it was too cold for Dorothea. Edith White gave the tea. Grace Bell had a rather handsome young khaki man from America with her,

named Jest [?]. There was a pretty good attendance, the best this session I believe. I got through the essay without coughing, but coughed as soon as it was over. I think most of it was very new to them all; the discussion, though fairly free, was not much about Richard III. Mamma began it, saying she had expected to have her mind made up one way or the other, but I was so impartial that she was left where she was. J.J. Bell said how uninteresting these dynastic wars were compared to wars fought for an ideal, & expressed that the only value of history was to teach lessons for the future & I forget á propos of what, talked about the power to make oneself (generally) loved & adored which only belongs to the very highest. I instanced Napoleon to the contrary of this, & he admitted that he certainly wasn’t the very highest. Mr Walpole said the essay left him feeling that

kings & rulers were an unmitigated curse & I forget what else he said,

[Superscript: its only movements in history that are interesting, except a few shining lights of reformers. Only good thing about R. his patronage of Caxton]

but it was gloomy as usual. Willie Jacob talked about a history book of his schooldays & how highly it spoke of the reign of Henry VII, quoting the opening sentences of that chapter. He said he wasn’t much on history; I have a feeling that everyone said that. Grace Bell spoke interestingly as usual, saying how interesting Richard’s portrait was, & what a cruel tight mouth he had, & how his history reminded her of Tiberius, whom it seems people are defending now as a good ruler. I said a good deal in answer, remarking on the interest of personalities in history, even if they’re not reformers, & how one will light up a whole tract, & I urged on Mr Walpole what a good king Richard was. Nancy came home with us in the covered car, & she seemed to have taken some interest in the essay.

Wednesday 29th. – I went to the Tech. We had a Scouts’ committee a.t.; Mr Power wouldn’t have us in the C. na mB. room any more, not being quiet enough for him, & there seems no other room to be had. I went over to St Declan’s then to have a bath & see Louis washed next morning. He was a little troubled with his inside, but he was pretty good with me all the time Nancy was singing, though the fear of him crying rather took off my attention from her. After supper I was let walk him up & down for a long time to get him to sleep. Nancy & D. and he were all going to Cork the following Friday – & Emily too.

Thursday 30th. – Very cold day. L. looks somehow like a frog in his bath, & does not seem to me properly fat. I didn’t go to town, nor any-where else.

here to stay. Aunt H. had Daisy. Mamma was horrified at D. & Louis going to Cork, but they had a comfortable journey & stayed first at Redclyffe, where they were well attended to.

Saturday 1st. – Aunt H. lost Billy in the evening & was in frightful despair to find him.

Sunday 2nd. – I went in to Summe Newtown House in the afternoon to look for Billy in their garden, and was kept visiting a while with them. Young Jest [?] was there, & I asked him what he thought about prohibition in America, & he said he approved of it. I forget how it came up, but I surprised them

very much by telling them that Gaelic League & Sinn Fein dances have temperance suppers, the former always & the latter so far as my experience goes. Charlotte came down the garden with me, but of course Billy wasn’t there. Uncle E. found him in the evening, down [on the stonework] outside the bridge in Lombard St, and a boy fetched him up.