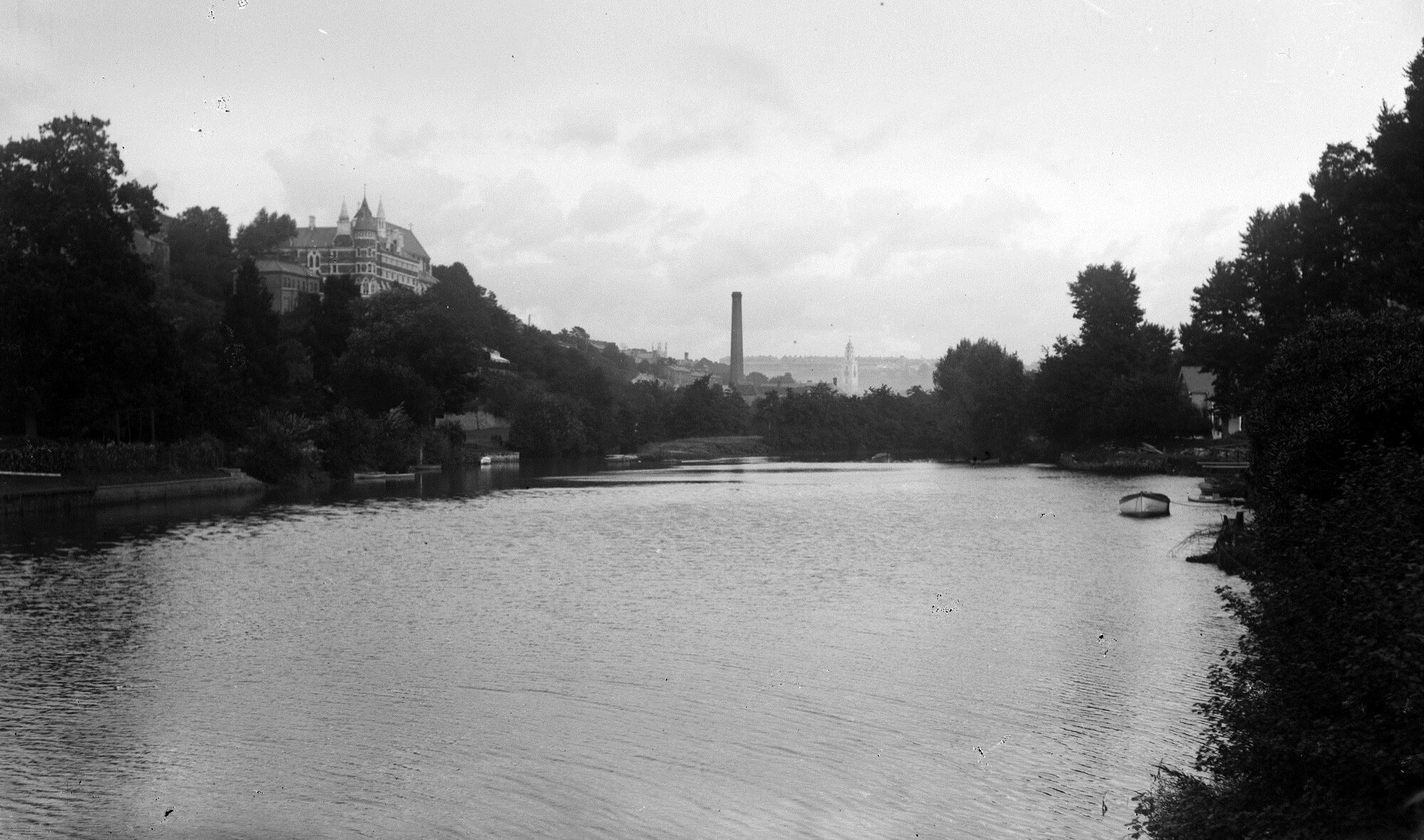 “After tea I had to go & visit Joe & Doreen over the shop in Prince’s St & they took me to the pictures. There was a good comic film about an elixir of youth that made you old if you took too much, but the girls in it had beastly stage dresses, both ugly & indecent, & there was a war story about a French girl who was captured by a handsome German prince & was his adored mistress for a long time…”

Monday 26th. – Aunt H. was a little better these days, and had begun to get up to tea. I don’t know what I did this day. I know Tom & I sat up very late talking.

Tuesday 27th. – I went to Corcaig [Cork] by the 10.45 train. It was a showery morning but the country was exquisite with furze & primroses and fresh trees & bushes. It wasn’t badly crowded, especially after Mallow, & the journey didn’t seem so long as it used. D. met me and we went up to Waterloo Place where she was spending the day. Maud & Honor were there, H. is not exactly pretty, & is a little bit of a tall, but will probably be handsome, & has a look of Stephen about her nose, & grand dark eyes. She cries a good deal. Louis was glad to see me. We had

dinner, while the Russells minded Louis on the terrace and Aunt Bessie told funny stories about the youngest of them. The house doesn’t look as well kept as it used, but all the little gardens along the terrace were lovely with the fresh trees and flowers, just like six years ago. Mr F. came home, and took a photo of Dorothea and Maud and the two babies, and Louis and I walked about the terrace for a long time, he wanted to go in at every open gate, and very fond of little stone. Tony came up from a singing lesson and stayed to tea. His father distrusts all these singing lessons, fearing they may lead him onto the operatic stage, and doesn’t seem to take away any interest or pride in his progress. Maud came with Dorothea and Tony and Louis and me to Redclyffe after tea, we went by the quays and the Mardyke, and it was a very pretty walk. Aunt Lottie has got thin, and Uncle Stephen is or seems to me handsomer than he used to be. Tony was turned on the sing, partly for Maud, who had never heard him before; he sang Dark Rosaleen, and the Lute player, which I cannot care about, and a lovely French song – “Sets Heureax”, and one the music of which Uncle S. wrote for him, which certainly

was beautiful, & I never heard his voice so delicious as in it. It was called Pray but one prayer for me; I don’t know who the words are by. I think Uncle E. played that accompaniment; Aunt L did the others. Then Uncle S. was persuaded to sing Douglas Gordon & another song or two, & though his voice was a bit rough at first for want of practice, it improved as he went on, & got very good. It was pretty to see the delight Grandpa took in Tony’s singing & also in Uncles S’s. Tony said his uncle’s voice was like painting & his own like pencil drawing; D. had remarked how extraordinarily different they were. Uncle S.’s may be more vivid, but I think Tony’s is richer, though of course I can’t tell what Uncle S.’s was at its best. He was quite cheerful all the evening, like an ordinary person. The rough white dog, Bobby, is very nice, & there is a pleasant little grey cat called Pussyfoot. Jerry is

there still, but old & rather decrepit. We had a late supper in the diningroom & didn’t get to bed for a long time.

Wednesday 28th. – Long letter from Ben about the journey & Madeira & the sunrise over Tals [sp.?]. Very fine sunny morning, but it got showery as it went on. D. & I went to town with Louis to meet Maud, & we went back with her to the park & sat there. She had Honor in her perambulator. She was talking a lot about her father & his last illness & about her early acquaintance with Stephen. He was hunting a job in Belfast. I heard a lot, mostly from D. about the way Aunt Bessie broasts of her old family or families to Maud, to make her feel what a tull she is – she seemed to be rather unpleasant to her in other ways too. D. had to go back early to prepare Louis’s dinner, & he played about & discovered a man, from whom he had to be forcibly

detached when it was time to go. The park was a dream, with the river & the young trees & the flowers. In the afternoon Uncle S. & D. took Maud & me to view “the Honon Chapel” just off the college grounds – a lovely little place, especially the mosaic design on the floor of the river full of fish & the whale & all the animals. There were stained glass saints, Gobnait & Maincin [Manchán] & lots that I never heard of, & the signs of the Zodiac on the floor near the entrance, cabalistic symbols & all, which I don’t think should be in a Christian church. But I was glad to find them, & with a C.T.S. book out of the rack & Uncle Stephen’s pencil I noted down the symbols. The college grounds were heavenly with all the young trees & the river. The present management is despised. Uncle

E had on a nice dark suit then, & looked very handsome. There were a couple of snapshots taken in the garden that afternoon when it was sunny. Louis plays in the garden a lot of the time & has learned to do hide & seek round the yew hedge with great delight. After tea I had to go & visit Joe & Doreen over the shop in Prince’s St & they took me to the pictures. There was a good comic film about an elixir of youth that made you old if you took too much, but the girls in it had beastly stage dresses, both ugly & indecent, & there was a war story about a French girl who was captured by a handsome German prince & was his adored mistress for a long time, till he discovered her sending information to the French, & she killed him & went back to France & married her former lover.

Her conduct in deceiving & murdering the German was evidently quite correct. Joe & Doreen were very pleasant. I got back in time for supper and we sat up pretty late, except Grandpa of course. There’s a picture of Cromwell in the diningroom, perhaps not quite as ugly as usual. Tony claims to have found the wart on it. He had a good deal of interesting talk about the college – about the gyroscope that wouldn’t go round because the string was too long & the whole class knew it but the demonstrator, & about the camogie club & its insubordination. They treat the present head with great disrespect. He agreed with me in not seeing any violence, in the “No sir, – I’m a Molly” answer.

Thursday 29th. – I spent a lot of the morning with Louis in the garden & took him out on the Mardyke to get him to sleep. Then D. came

& we sat in the park & she talked about Maud & Stephen – mostly Stephen, & his job & Tony going on the stage etc. They say he’s too old to start. Nancy & Maud don’t agree very well; they get on each other’s nerves. Nancy considers D. & Maud very old, & is annoyed because people on seeing her wedding group were apt to ask which was the bride, & to think D. looked as young as she did. Mrs Franklin paid a visit in the afternoon, Uncle S. went about most of this day, indoors & out, in clothes that you’d be ashamed to offer to a tramp. I did admire the way he walked in the park in them. D. & I went out to visit Mrs Alfie Jacob & met her on the road with her pram. She is good-looking, but was uglily dressed. Mrs Franklin paid a visit & of course had to be

received in Aunt Lottie’s study, away from the men. They must be expected to endure a female visitor. We went off after tea & Mr Farrington & Aunt Bessie came to the station to see us off. Louis was very good & slept most of the way back. The country was exquisite as long as it was daylight. Tom met us.