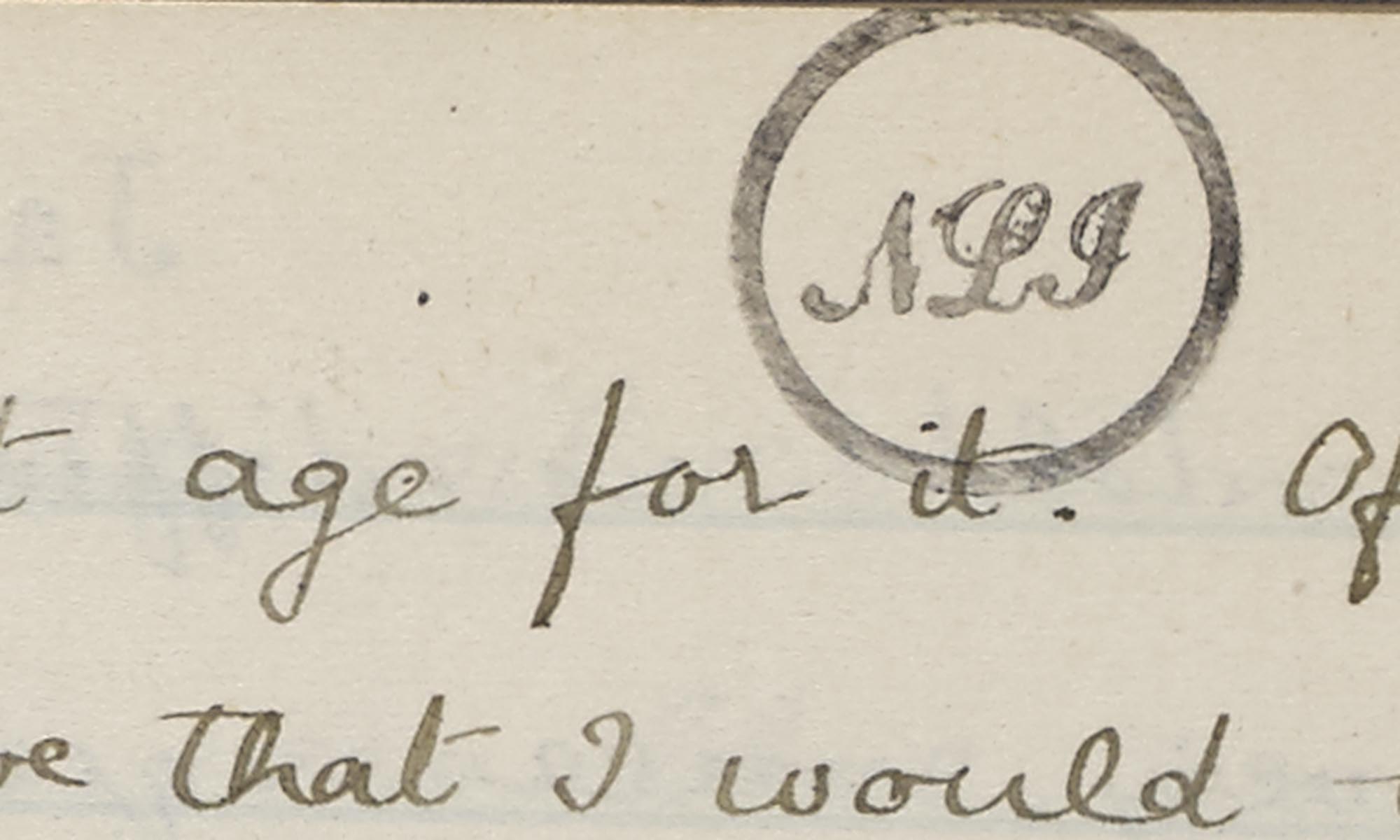 “I went to Suirview early to hear Aunt Maggie’s account of Maritana. She was delighted with it, but greatly disgusted at the way the Marchioness is jeered at & regarded as an object of horror for being old & wrinkled. As she said, women who are not young are supposed to have no feelings. She spoke extremely sensibly about the different way the sexes are treated in this respect, considering she married a man 34 years her senior.”

Monday 14th January. – It rained all day and destroyed the snow.

Tuesday 15th. – I went to town in the morning and it was very cold. I visited Tom in the afternoon – he had a cold and couldn’t go to the F.L.S. meeting. It began to snow again about four, but the ground was wet and it hadn’t a chance. I went to the F.L.S., and found a very small crowd, on account of the weather and the lecture the night before. I was sitting next I. J. Bell at tea, and he was intensely interested to learn that I think I could get more good out of boarding-school life

now than when I was at the right age for it. Of course the natural thing would be that I would be too set & hardened in my character now to be affected by it, whereas the fact is that when I was the right age to go I had no idea that I required to be affected by it, & wd not have been able to adapt myself to it. Leopold Grubb gave the lecture, on “Waterford district in bygone ages”, and what I heard of it was all about strata and the different age of the rocks in Bilberry, Mt Misery etc, & the remarkably high development of some trilobites in the very deepest rocks. I had to leave to go to the Gaelic League at 8, and found no Mr Connolly there, so after a while we got a man up from downstairs who is usually in our class & who is next door to a native speaker, & he heard us read & asked a few questions

and told us difficult stories about Rinn. He has a very nice square dark face. It was still snowing as I came home, & at the town and of the park, I saw a great flood stretching away up the road. A man who was also going up the road accosting me, & we got over the wall into the park & squelched through what was very nearly as wet as the flood, & deplored the vanishing of the snow so soon. It was not until we got onto the road above the flood & passed a lamp that I saw was the De La Salle Brother from the Gaelic League class. I never recognised his voice at all. Aunt Maggie was with Mamma when I got in but left soon. She came to spend the days at Suirview & go to Maritana on Wednesday night, & I was visiting here there in the afternoon.

Wednesday 16th. – I went to the Technical school in

the morning & Mr Shea produced these silver & new enamel he has got. The latter was blue, & said to be opaque, but when we tried it on a little plate for the new brooch, it came out a lovely clear greeny blue, & was done & glazed in a minute- with the blow pipe too. A great change from the other enamels. We were telling Aunt Maggie about the Powers; I wish she could meet them. She said when Marion is at Orristown they argue all the time. M. is in England now, doing miscellaneous nursing. I went to the Fianna in the evening & we had a committee, but there was no officer’s class till the next Monday. I wrote to the Countess to ask how the girls in Dublin manage their affairs, but God knows if I’ll even get an answer.

Thursday 17th Jan. – I went to Suirview early to

hear Aunt Maggie’s account of Maritana. She was delighted with it, but greatly disgusted at the way the Marchioness is jeered at & regarded as an object of horror for being old & wrinkled. As she said, women who are not young are supposed to have no feelings. She spoke extremely sensibly about the different way the sexes are treated in this respect, considering she married a man 34 years her senior. She & I went to town then & she looked for dress material & a garden seat, but without satisfying herself. Its wonderful how she seems to expect shop people to join with her in decrying their own goods. “Don’t you think the spot makes it look very old fashioned?” It rained most of the day.

Friday 18th. – I went to the Tech in the morning. T. & I went to Maritana, neither of us having been able to go on Wednesday. The orchestra seemed to me very good, & it was a

pleasure to watch Begas conducting, he was so restrained & seemed to have such perfect control. He has a queer face, rather ugly, but interesting. The choruses in the first act were lovely. Maritana (K. Heffernan) had a long nose, but she was sprightly & sang well. Don José (Manahan) had got very course & plain, & he & Don Caesar had Charles I beards & moustaches & Charles II periwigs, & looked all choked up with hair. The latter was Maurice Murray, & was nice & slim compared to most Don Caesars, acted drunk very well & sang beautifully. Marie Cullen neither looks nor acts well as Lazarillo, & I don’t think she sang as well as five years ago. Let me like a soldier fall was lovely. In the festivity at the Marquis & Marchioness’s house there were some handsome young men in periwigs & cleanshaved, with

curiously 1670-90 faces. As usual the Marchioness was handsomer than Maritana, though the latter looked very well in her green & white costume in the 2 last acts. It wasn’t over till 11.20.

Monday Sunday 20th Jan.  – D. & T. came to dinner. D. considers Don Caesar a very fascinating character. I was complaining of his desire to be made Governor of Granada instead of some place nearer to his creditors, even in his prosperity. I went to the club committee a.d. & O’Connor & Wheeler were telling their plebiscite experiences.