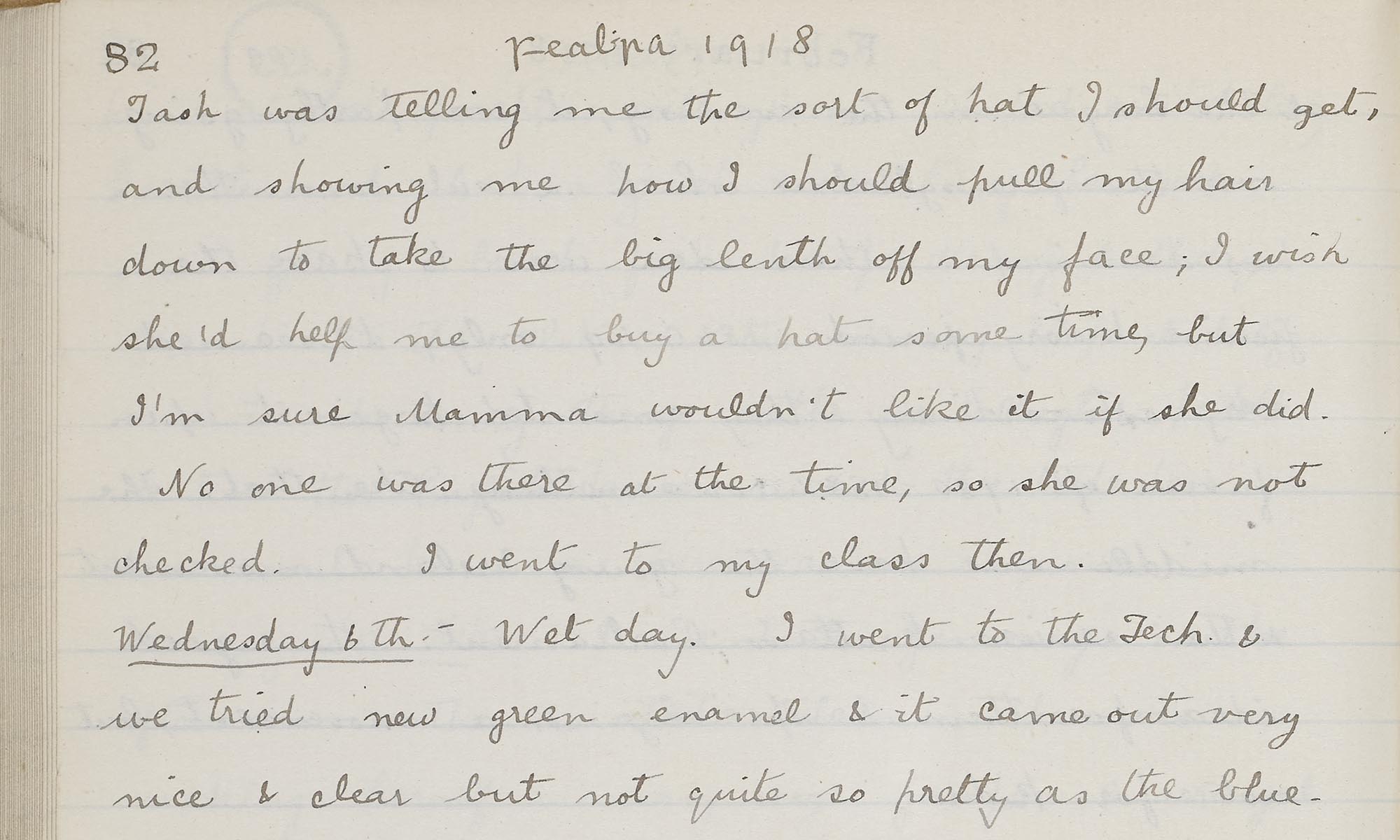 “I went to a committee. at the League in the evening; it was partly going over the feis syllabus which a subcommittee has drawn up – their idea was to have the junior history period 1840-49 only, it seemed very extraordinary & they consented to give it up in favour of 1780 – 1882 or something like that. The middle ones have the Young Ireland movement & the seniors Grattan’s Parliament. Its a good idea for them to specialize on a movement, but not for kids.”

Monday 4th Feb. – I went to Jennings in the afternoon & then visited Eileen. She was making herself a navy serge jumper, & arranged to come over & use our machine for it some day that week. Darkey was there with a gorgeous coat, though his tail is not up to the rest of him. E. gave me a substantial tea & told me Hilda is coming over in April & proposes to have a baby at Mrs Webb’s place in Catherine St and stay the summer. E. expects to enjoy it very much. I went to a committee

at the League in the evening; it was partly going over the feis syllabus which a subcommittee has drawn up – their idea was to have the junior history period 1840- 49 only, it seemed very extraordinary & they consented to give it up in favour of 1780 – 1882 or something like that. The middle ones have the Young Ireland movement & the seniors Grattan’s Parliament. Its a good idea for them to specialize on a movement, but not for kids.

Tuesday 5th Feb. –I went to the hotel a.d. and found no one there but Marie; Mrs P. in bed and Kitty & Tash gone to the doctor. They came in presently and we had tea. Tash had an ulcer on the back of her tongue which was greatly in her way. They said the Armagh defeat must be for the best because people had prayed so much about it.

Tash was telling me the sort of hat I should get, and showing me how I should pull my hair down to take the big lenth [sic] off my face; I wish she’d help me to buy a hat some time, but I’m sure Mamma wouldn’t like it if she did. No one was there at the time, so she was not checked. I went to my class then.

Wednesday 6th. – Wet day. I went to the Tech & we tried new green enamel & it came out very nice & clear but not quite as pretty as the blue. In the evening I went to the Fianna hall & the officer’s class was bandaging, I can’t say K. Dalton taught anyone; she & I bandaged each other & the boys bandaged each other. They were junior officers,  the senior ones had gone to see a boxing match at the theatre, in the pursuit of knowledge.

& sewed her jumper for a long time and had lunch and conversed. Dorothea called while she was here. In the evening I went to a general meeting at the club. Wheeler wanted to have men put on the committee, each with a special subject to work at – getting up concerts etc, & this was agreed & Bishop & Doyle from Morris’s coalyard & someone else were appointed. Seán Matthews considers the club is decaying; he made a gloomy speech as usual, but he was right in suggesting that the committee should adjourn 5 minutes after the hour; if there’s no quorum; he said the Volunteers did that to put down unpunctuality & in a year only 1 meeting had to be adjourned. They Wheeler proposed to have lectures during Lent, & not only then either, & I supported this, & he said we would get “men” down from Dublin. He always speaks, whatever he’s saying, as if

women had no existence. Seán Matthews wanted to have O’Connor censured for saying at the food committee that farmers are unpatriotic, but as O’Connor was absent, this was dropped.

Friday 8th Feb. –I got the front of the brooch soldered this morning, but it was mostly O’Shea that did it. After some failures I had got the ends stuck together, but when I had the wire arranged on the brooch it rose up when I began firing it – too sudden heat I suppose – & just as I was starting again he came in & did it, which was irritating.

Sunday 10th Feb. –D. and T. came to dinner & we went out the road & round May’s Lane & Powers nursery lane, in considerable mud, but it was a fine day. They both read what I had of new of the Frances & Callaghan’s story, and D. said it was queer that I should deny all power of understanding men when I can

understand Callaghan so well. She seems to think he is like a man, which I am glad of, but he is not like the men I meet. She says he was very much influenced by living in America, that his lack of touchiness & shyness are very un-Irish, as I suppose they are. I went to the S.F. committee, and they had a letter from Diarmuid Ó Loingsigh the food controller, telling how S.F., Volunteers, Transport Workers etc in Corcaigh had successfully handled the export problem there, partly by picketing butchers who kept on slaughtering cattle, partly by T.W. refusing  to load goods on ships or railway, & they have it in hand there now, but its no use if we can’t do something as the food is being sent out from Waterford & Rosslare instead. The latter was explained by Cathal O’Shannon who sees to travel round attending to this matter; a small

thin delicate looking man with big dark eyes & an emaciated face & a northern accent. He described their doings in Cork, & finally it was fixed to have another meeting of the food committee at the Trader club. All that the one appointed by the corporation did was to decide to consult with the government & Redmond.