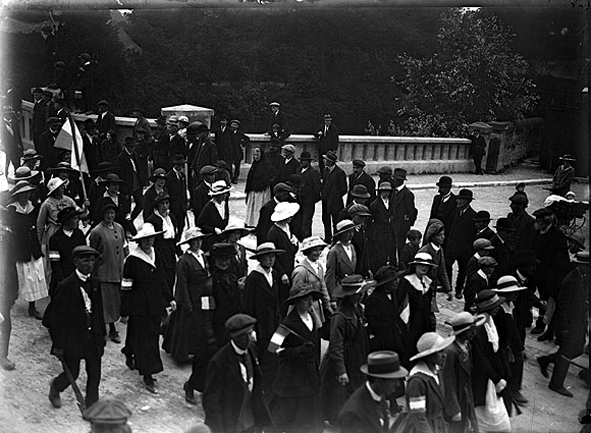 “I visited the carstand Powers a.d. and found that Juley had been away in Wales visiting a sick brother. She had a lot of political talk in trains and things. I went to the election committee in the evening, Whittle, 5 male heads of wards, & Miss Skeffington & me. J. K. Walsh, W. Doyle, D. Grant, J. Wylie & I can’t remember the other.”

Monday 13th May. – I went to the Tech & slaved at my turquoise ring for 2 hours, filing down a broken setting & putting another one & jamming in the stones. I visited the carstand Powers a.d. and found that Juley had been away in Wales visiting a sick brother. She had a lot of political talk in trains & things. I went to the election committee in the evening, Whittle, 5 male heads of wards, & Miss Skeffington & me. J.K. Walsh, W. Doyle, D.

Grant, J. Wylie & I can’t remember the other. Whittle had orders to choose sub-directors for all the departments for the next election, & they proceeded to do so – I forget who most of them were except that Wheeler was Literature & J.D. Walsh was Transport & Seán Mathews commissariat & Grant Canvassing, & they would make me Finance. I said I knew nothing about money, & they said I didn’t need to, but I must be in the rooms all day to sign orders & put down expenditure. Now I find all this happened on the 17th, not the 13th. The meeting on the 13th was all about forming ward committees & making lists of everyone in each street who ought to have votes, so as to compare these with lists of claims to be published shortly.

& stayed a good part of the afternoon. I went to see R. Butler, & saw Mrs Donovan’s new baby, a little girl & a queer looking little thing. [Unclear shorthand writing here]. I went to the first aid class in the evening & got a few more shillings, but 10 of the girls who took books still had not paid for them. Annie White had come down to visit Miss Sulist, [sp.?] who was ill, & she came in to see us in the evening. She stayed at the Y. W. C.A. She was very lively, & told us of some most remarkable dreams she had had, and arranged to come to tea the next evening.

Wednesday 15th. I finished the ring at the Tech, & it looks very nice. Dorothea came home from Cork the day before, & she & Tom came to tea as well as Annie White. There was a great deal said about White ancestors

of course,  but Annie was interested in photographs, & as Ben said about Maud White, she listened well to music; Scotch songs of D’s, that is.

Friday 17th. – I finished the 2nd copper brooch at the Tech. Mrs Callender, who used to have a tea rooms in Dublin & who I met in 1911, came down to Waterford this day to organise the Women Workers Union for a couple of weeks, & stayed here for the night till lodgings could be found for her. She is thin & has a northern accent, & laughs when there is nothing to laugh at in a rather irritating way. I went to an election committee in the evening, & it was then that the subdirectors were appointed.

Saturday 18th: Fine warm day. Mrs Callender & I went to town in the morning, & heard the news of all the arrests in Dublin the

night before. She had got a room at Canada House & had made friends with the I.T.W.U. organiser, Coates, who is here permanently, a very able energetic man, with a fine opinion of himself. I went to a meeting at the club in the evening; P. W. Kenny was there & was no addition; he talked a lot & had some objection to storing food. It took them all the time I was there to discover that they had not a lot of surplus election fund money which they thought they had, & which they proposed to buy food with. Wheeler was sure he & others were going to be arrested. [Superscript: Mrs C. went to Canada Hs in the evening.]

milkwart – beautiful little dark blue flower all over the grass, and clover coming out in one field. The view was fine, Tráigh Mhór seemed very close. We went on along the road past the hill & made a long detour which ended in our reaching the Dunmore road just at the creamery, where Carraig fada lies alongside it. We came home so, in much shorter time than we expected. The hawthorn is splendid this year. There were primroses still, but the furze was going off. I tried to get off the finance sub directorship at the committee that evening, when the report of the sub co election committees doings was read, but they wouldn’t let me off. They said there was so little to do that O’Leary, who was in that job at the election,

spent most of his time doing odd jobs for other people, and that most of the business is transacted with the other subdirectors.