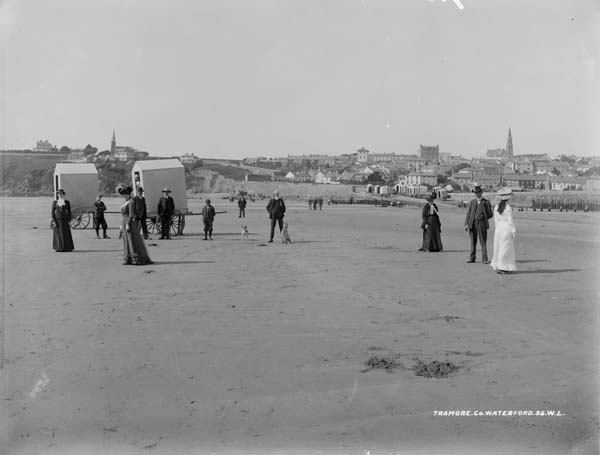 “There were crowds looking on everywhere, half of whom ought to have been in the procession. The large room was packed, & Miss Bloxham spoke well & not at too great length. I didn’t do myself much credit, but I was received on rising to speak with an enthusiasm that astonished me.”

Monday 3rd June. – Still very hot. I went to town in the morning and bought a white drill skirt & a pair of white shoes. Mrs T. J Bill & had asked Dorothea & me to afternoon tea & we went & were entertained by her & her niece Ethel, a girl of about 16, with reddish hair & a pink dress. They showed us a lot of photographs – postcards – of beautiful places in the south of France where Norman has been making huts. Ethel had been reading the Scottish Chiefs lately, but didn’t seem to think much of it – it was too full of fighting & murders.

I went to the hall in the evening; read my account of Red Hugh’s captivity & escape to the girls & then asked them a few questions on it. It really seemed as if they had hardly listened to a word, & as for knowing where Red Hugh lived or differentiating between his two escapes – It was very discouraging; I thought I had made it all so plain & simple. They talked about rooms again, & someone suggested the Foresters in Rose Lane, so I called there on my way out & found we could have one once a week for 1/- a time, which seemed to me all right, as we wouldn’t want one much oftener than that in the summer.

Tuesday 4th. – Tom was going to Drumdowney in the afternoon, so he took Mamma & D. & me with him. It was a lovely afternoon at first, but clouded over as we came back. Mamma enjoyed it greatly, as she has had no motoring for so long.

I went to the first aid class a.d. & found Mrs Phelan & Mrs Gallagher talking of Lá na mban the next Sunday & making arrangements for it. The subject of the class was mostly artificial respiration, but we had some bandaging too. It was the last lesson. I don’t believe half those girls have an idea of first aid yet, though if they read their looks they’d know it all.

Wednesday 5th. – I went to the Tech & continued Mr Lane’s ring. In the evening I had to go to a meeting re Sunday at the Town Hall, before the ceiligh that Cumann na mBan had that evening Mrs Power, Mrs Hayden, Mrs Ryan, Mrs Phelan, Miss Doyle, Mrs Gallagher, Miss MacDonald the mayor’s daughter (the mayoress was too shy & retiring to have anything to do with it) & others. Miss Doyle refused to be chairman, so Mrs Hayden was made so, & I & Miss Mac D, were made secretaries, though I

explained we were going to Tráit Mór on Saturday.

Thursday 26th. – I went to town & did a lot of errands about Sunday – leaving circulars & newspaper announcements & ordering posters. There was a general meeting at the club in the evening, & a very sensible suggestion made by N. Whittle – start canvassers’ classes, so that canvassers will be efficient & well able to argue at the next election. Dr White agreed to lecture to a class the next Thursday

Friday 7th. – Mrs Coade came to tea, & was very interested in Mrs Callender’s doings. It was this evening that Tash rang me up on the telephone to know were there to be any S.F badges or flags on Sunday, because Mrs Power had promised the other side there wouldn’t be, & would throw up the whole thing (C. na mb, included I think) if there were. Tash was in a great [superscript: We were told from Dublin that Miss Bloxham of Newtownbarry wd come & speak if we wired to her.]

temper, & it all seemed to me very absurd. We made Mrs Coade write her favourites, but she couldn’t finish them, and took the book home with her. I had to go off to a meeting at the Town hall at 8.30, & Mrs Callender to the trades hall, but she came on to the Town hall after. Miss MacDonald talked of a rumour that there were going to be Sinn Féin badges worn, & how wrong & unfair it would be; but Mrs Gallagher said everyone could wear their own badges, & no one except Miss Mac D. dissenting from that, it was went. But there were to be no flags except anti-conscription ones, & Mrs G. & I, to placate objectors, had told the Sinn Féin women not to wear armlets, only badges, & I believe they were very angry about it. Mrs G. said a lot of people had been objecting to armlets to her. A deputation was instructed to go to the bishop next day & ask him

to let the priests announce it in the churches, & it was agreed that people should meet outside their parish churches to go to the Town hall. There was a lot to be done next day, but I explained clearly that I cd do none of it.

Saturday 8th June. – [Superscript: Mrs Callender left by a very early train] I went to take some haversacks to the carstand Powers in the morning. It seems they were never not asked to the first lá na mban meeting on Wednesday, & they are very offended about it. They had complaints to make too of Mrs Power’s dealings with them re meals for the untried prisoners in the jail, and mazed me with little account books about it. We went to Tráit Mór by the 2 3.15 train; T. cycled. Miss Timmons couldn’t have us, so we were in, Marine View, next beyond the Atlantic hotel; a very nice house with a downstairs parlour, a nice capable housekeeper

named Mrs Phelan, and a very grand bathroom. But there were only two bedrooms for us there; I had to sleep at Miss Timmons’s; in the little back room at No. 2. There were books in the house, including At the Cross Roads, by F.F. Montresor, which is rather good. Mrs Phelan had a little girl named Kathy, who had the pleasantest looking Teddy bear I ever saw.

Sunday 9th June. A horrid windy morning. Tom & I went for a walk round the Dún ath Aill walk & the cove road, but the wind was infernal. I went in to town by the 1.30 train, or maybe 1.15, & dined at Suirview and went down to the Powers at three, to discover that the bishop had refused to let the announcement be made in the churches, & had also objected to people gathering outside the churches. It will give pious Sinn Feinigh the

same trouble to get round that plus his not passive resistance to calling the defence committee. We went to the Town hall, or rather I did, the Powers went to join up at the club, where Mary Gallagher was drilling them in the lane. I found Miss Doyle & Mrs Phelan etc etc, with Miss Bloxham, a tall rather nice-looking young woman, & I was informed that I was to propose the vote of thanks to her at the meeting. Miss Cutlar was to second it. Really Miss Doyle ought to be ashamed of herself never to be willing to open her mouth in public; leaving it to comparatively obscure girls like Miss Cutlar. Of course Miss MacDonald wouldn’t speak, but she never did anything public before. I had some trouble getting through the crowd of spectators to communicate with the Forester’s band when they arrived; but we got started

punctually at 4, & were back at the Town Hall by 4.40, as we had to turn up Gladstone St instead of going on to the Bridge, the dust storm on the quay was so awful. It ripped the banners half off their sticks, & made it impossible for the women to carry them, part of the time they had to be furled altogether, & we could barely keep our hats on or our eyes open for the whirlwind blowing against us, full of big gritty particles that obscured the daylight. There were crowds looking on everywhere, half of whom ought to have been in the procession. The large room was packed, & Miss Bloxham spoke well & not at too great length. I didn’t do myself much credit, but I was received on rising to speak with an enthusiasm that astonished me. Miss Cutlar was middling, & it was all over by 5.45 & the people busy signing the pledge.

outside. I found Aunt H. in the crowd then; having come late after waiting some time at the Court House (we meant to have it outside there, but the sheriff wouldn’t give the place) & she asked Miss Bloxham up to tea with Miss B. is as great a jam eater as most right minded Catholics, but very agreeable. She is a Technical domestic instructress like Mrs Murray used to be, & I believe a Protestant. She said her idea of Quakers was derived from an essay of Charles Lamb about them. She has a beautiful ring of Miss MacDermott’s, an emerald matrix. I had to leave shortly after tea, after witnessing Kate’s will, for Charlotte came to take me to the Baptist church evening service, to show me that such functions weren’t all like the one at the Presbyterian place. It certainly was much better; Deens preached a very good

sermon, from the Christian point of view, about the paramount importance of character & the unreality of worldly things compared to it, & his notion is that the three essential methods for to building character on are to do it scripturally. He looks a very saintly ascetic young minister in the pulpit. I came back then & got my bicycle a rode out to Tráit Mór with the wind partly behind me else I could never have got there.