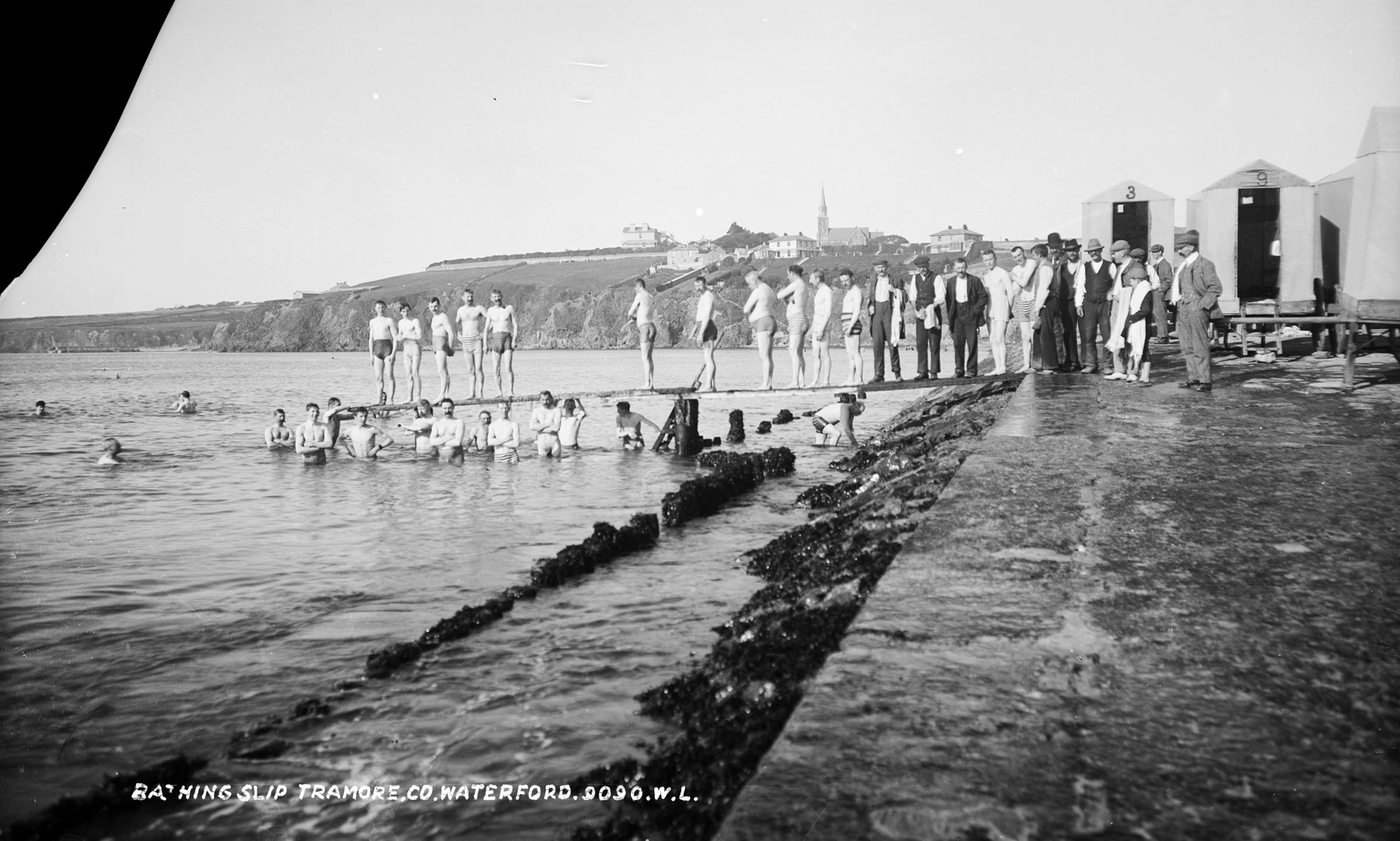 “It was cloudy all day, & in the afternoon when there was a Sinn Fein meeting, mostly about the deported prisoners, going on outside the station, there were a couple of heavy showers. We all went to the meeting, & Mamma & I went to visit Miss Timmons too. Mrs Maxwell the D.I.’s wife is staying with her, & does be telling her scandal about De Valera’s parents.”

Monday 10th. – A faintly nice warm day. Dorothea & I went down to the corner of the strand b.d. and sat there a good while picking little white stones, the tide being out. We met Miss Walpole there after a while, & then Mamma came down. I went in to town for the day. I was invited to tea (or supper they call it & it is

more than tea) at the Bell’s, & I cycled in to them against a nasty wind [superscript: and met Tom on the doorstep]. It was a most noble meal certainly; I think it is Fred’s dinner. He took us down to his field before tea, & introduced us to 2 kids he has there. He is afraid the big bell over the shop may be injured if the English army should take to shelling the town from Mount Misery when conscription comes. After tea Mr Deens, Mrs Coade, Mr Noble (the widower Mrs. C. was telling us about the autumn & his new fiancée Miss Thompson turned up, & Janie condensed a chapter out of Citizenship about the poor laws of England since the middle ages. It was very interesting but of course entirely English. Mrs. Coade to our great delight explained how the poor house system was forced on us in this

country on the recommendation of one Englishman against that of the Irish commission which had been sitting on the subject, & with the apparent object of rooting out small land holders altogether because it was thought more in the interests of landlords do away with them. If T. or I had said half of this, we would not have been believed. Except the Bells, who seemed to think it might be reformed, the general opinion was that the workhouse system is necessarily an evil in itself & all efforts should be directed to gradually abolishing it. They seem to have a good system of providing for the sick & aged poor in Denmark. Mr Noble prepossessed me very much though he is bald & fair, he has a very nice refined thoughtful face & a pleasant voice, & spoke very sensibly, saying a great course of

trouble with this subject had been a mistaken interpretation of the text “The poor ye have always with ye.” Miss Thompson of course didn’t say anything. Mr Deens talked of 2 women inspectors of boarded-out children that he knew of when he was under the local government board in Dublin, they seemed to work very hard & be very useful, & there should have been more of them. We broke up as usual early, & T. & J cycled out to Tráit Mór. There are wild roses on the road between the long hill & the railway bridge, & lots of ceann a bhán in the boggy places; the road looks exquisite on a fine evening.

Tuesday 11th June. – A middling fine day, but not warm. Tom stayed out, & took me for a very strenuous ride in the afternoon, out towards Garrarus & beyond it on roads all up &

down & covered with large round gravel inches thick, impossible to ride on. We traversed other roads inland that I never saw before, & came out finally near the Catholic church. We got some grand foxgloves & the views certainly were fine, with a pretty cloudy sky, but it was hard going.

Wednesday 12th. – I cycled went in to town by train & visited Aunt H. before going to the Tech. She was in bed, owing to being out so much in the wind on Sunday, & she had intended to go to Orristown that day. Uncle E. had gone to spend a week or two at Passage first & then Dunmore. She wasn’t bad, but there seemed little chance of her being able to travel for some time. I went to the Tech & got some of the pendant done; it was frightfully hard fixing the wire in a pattern round the stone.

Going out in the train I had with me 2 young women with a little boy of 2 or so & a very nice black  & white fox terrier named Milo, both of whom wanted to stand on someone’s knees & lookout of a window all the time. The child was very friendly with me & stayed with me a good deal of the time, & Milo also came to me sometimes. Now & then they wanted to look out of the same window off the same lap, & that made trouble, but they were a very nice pair, & the women were pleasant too. There was a woman from Át Cliat there also, who was afraid of dogs & had lost her umbrella in the train.

Thursday 13th June. – Fine day but detestably windy. I suppose we went down the strand in the morning; in the afternoon Eileen Dwyer came out to visit us on her bicycle. We walked on the strand in a frightful wind,

& Eileen told us about the quarrels of the tennis club. There is a certain set of good players in it who have courts at home and who are exclusive & occupy courts & never ask others to play with them, who are deservedly unpopular, but the childish openness about taking offence & showing it that seems to prevail there is very funny. Eileen told us a lot of gossip about her sisters after tea, very amusing & cold blooded, but I can’t remember it. She wd like to put all the “Roman Catholics” out of the tennis club.

Friday 14th June. – I cycled in to town & finished the little pendant. O’Shea didn’t approve of it because I didn’t draw a picture of it & show it to him before starting. Aunt H. was better but still in bed. I went to Jennings, who didn’t

keep me long, & got back to Tráith Mór about 4, finding both Mamma & D. out. I went up & visited Jessie & Uncle Charlie. We had a book of A.C. Benson’s at this time, From a College Window, which we began reading aloud in the evenings, & some of the essays were good – Priests & Art & the one on discussing other people etc.

Saturday 15th. – Fine day & hot in some places but there was still a cold wind on the strand. We went up to the Priests Road in the morning to buy strawberries from a Miss Chapman there who had a fine glowing little garden of geraniums & sweet William pinks etc before her house, & splendid geraniums in the porch. There was a little black Pom puppy, like a little

bear, in the little lane near the hotel, before you come to the cornfield, a lovely little fellow, & very friendly. Tom came out in the afternoon.

Sunday 16th. – Mamma & I walked on the esplanade while D. & T. sat on the sand near the women’s bathing place, & we saw some men bathing. I had a bathe at the corner then, but it was bitterly cold. It was cloudy all day, & in the afternoon when there was a Sinn Féin meeting, mostly about the deported prisoners, going on outside the station, there were a couple of heavy showers. We all went to the meeting, & Mamma & I went to visit Miss Timmons too. Mrs Maxwell the D. I.’s wife is staying with her, & does be telling her scandal about De Valera’s parents. I’m glad to find English people can do that, I feared it might

be a particularly Irish vice. There’s another woman with a very nice quiet friendly Aberdeenish little dog with 2 white toes there; he gets on excellently with Rough & Toby.