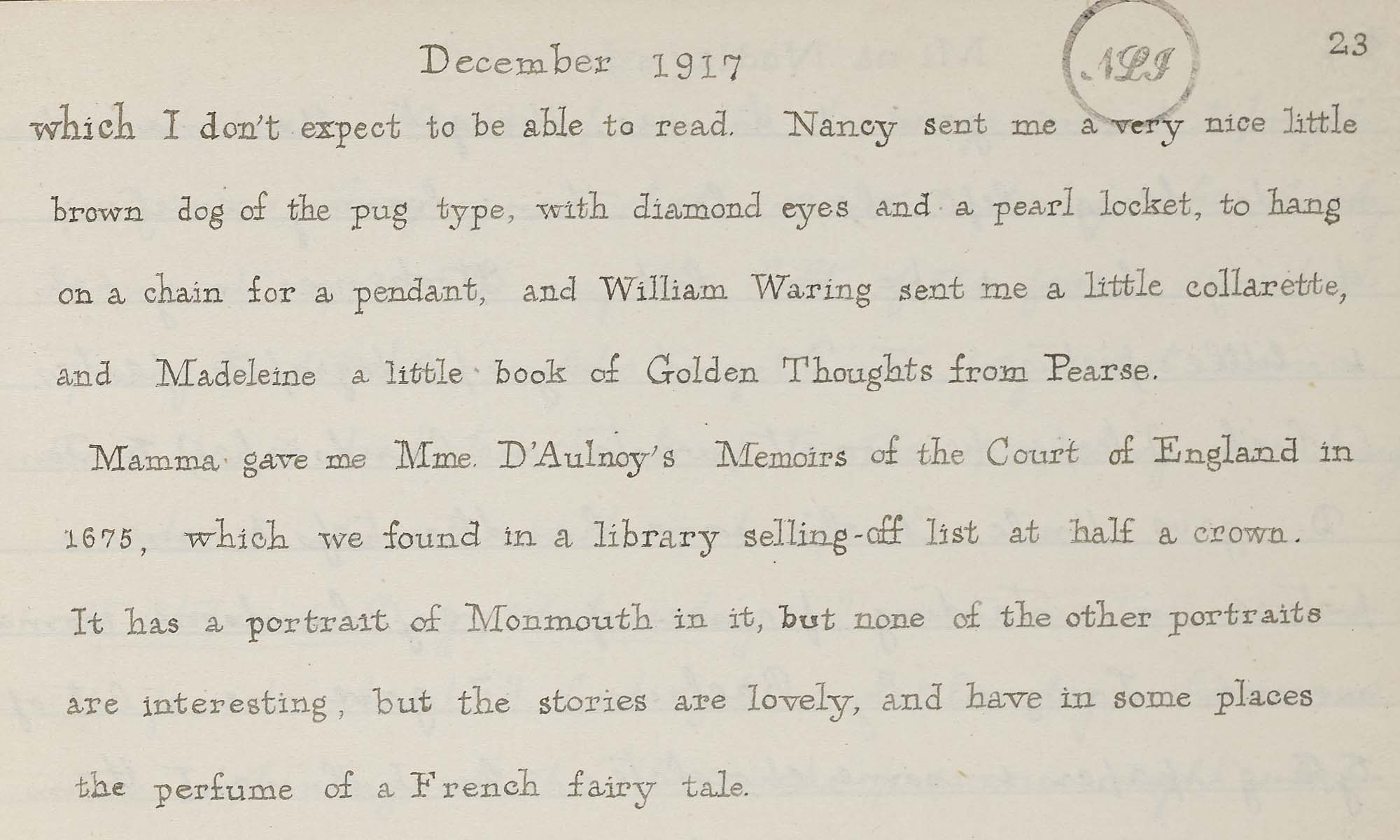 “We were talking of Uncle Tom’s Cabin which Kitty had never read, & I got it from Suirview to show her the pictures which appeared to interest her. She has a blessed power of being interested in things that you tell her, & in people especially. The more I read that book the more I am impressed by its merits & the more I like St Clare. Its only now that I am beginning to appreciate Uncle Tom himself.”

Christmas Eve, Monday. – I went to town in the morning to buy stamps & sweets & cards & tobacco for Uncle Charlie. The Central Stores was very full; they have nice sorts of sweets there but monstrous dear of course. Dorothea came in in the afternoon. Mamma’s cold was worse, & it was doubtful what was to be done the next day. They wanted us to dine at St. Declan’s. I went to Suirview & got ivy in their lane, & laurel, & bought a little holly from them, but it had no berries. Uncle Charlie is very quiet company & reads & smokes most of his time.

Christmas Day, Tuesday. – Fine day though it was extremely dark morning, & I woke at before 6 and couldn’t sleep again as usual. There were no bells the night before as usual now: and it would be improper to have joy bells sung with those two Clyde steamers full of Waterford men lost the week before. Seán Ó Floinn sent me a book – a play in blank verse, the Kingdom Makers, by S O’Neill,

which I don’t expect to be able to read. Nancy sent me a very nice little brown dog of the pug type, with diamond eyes and a pearl locket, to hang on a chain for a pendant, and William Waring sent me a little collarette, and Madeleine a little book of Golden Thoughts from Pearse. Mamma gave me Mme. D’Aulney’s Memoirs of the Court of England in 1675, which we found in a library selling-off list at half a crown. It has a portrait of Monmouth in it, but none of the other portraits are interesting, but the stories are lovely. And have in some places the perfume of a French fairy tale. Tash sent me a great big box of chocolate, and I got a beautiful card from Marie, but none from Kitty or Mrs Power. Charlotte to my great surprise sent me a long silver brooch with mauve enamel in it. Mamma was in bed most of the day, but Uncle Charlie was much better, and able to go out. Aunt Hannah gave me The Story of a Success, and if I am given any more Pearse books, I shall begin to get tired. Cards came from Miss Bowman, Miss Quinlan Upton etc, and little gifts for me from Lasairfhiona. It is the second Christmas Ben sent me no card; high time I gave up sending one to him. Uncle Charles and I went to dine at St Declan’s; we

were all to have gone, & it was thought Mamma wd mind being left alone less than having everyone dining here & she in bed. I took over my pots & little pictures to D. and my photographic plates (which I hope he won’t waste on landscapes) to Tom. D. gave Uncle Charlie some handkerchiefs & me a picture in a standing frame of a very handsome woman named Lauzun by Raeburn. T. gave me a lot of typing paper & some chocolate. Aunt H. sent them some napkin rings. They had a photo of Denis S. Stephens and lots of cards; D. had cards from both Mrs Power & Kitty, which seemed to me very unfair. They had grand sweets after dinner. Matty sat on my lap & Uncle Charlie smoked. About 4 we all came home & they stayed to tea, after visiting D visit Aunt H. who was in bed all day. D. was in her silk gown, whose colour I can’t classify, but it is the most becoming dress she has, I think. We played casino after tea,

all but Uncle Charlie, up in the drawing room, & I forgot if D. was singing or what we were doing when Emily came at 9.30 to say the bolt of the front door had sprung to & she couldn’t get in. They went home then & T had to climb up to the projecting landing window & open it with a knife.

St Stephen’s Day, Wednesday. – I went in to [unclear text sp.?] & found Aunt H. had got a little dog, who came in whining at the door the previous night, but very soon Ellie told us Miss White at Holmacre had lost her Tatters & it must be he. He was so friendly we didn’t recognise him. I took him home, & called on Annie in a cold drawingroom, I had left my picture that D. gave me on a chair in Mamma’s room, & T, coming in to visit her, sat on it & broke the glass into smithereens. No post but one card from Mina – she never answered my letter months ago, begging her to tell

me how to write to Norman for Christmas. Miss Walpole came to visit us in the afternoon. Mamma was better, & got up to tea. [Short hand symbols here]

Friday 28th December. – Dorothea & I went to the hotel in the afternoon & were received in 6 by Mrs P. Kitty & Tash; K. with awful chilblains & her hands all bandaged up. Mrs P. talked about the rooms she has done up & papered, which do look very fresh and pretty, & about the sunk Clyde boats (some man in that line told her the Clyde boats usually have convoys going to Liverpool but are let come back alone). We had tea, & Kitty talked of my story in the Xmas Fireside, which she likes because the girls behave so sensibly & keep their secret & are so unlike the usual girls in ghost stories. K. has nearly always has one of the levellest heads I ever met – she would make an excellent suffragist. Then Mrs P. brought her embroidered black cloak & bonnet to show us – the cloak becomes her well,

but the bonnet is too small, though it looks lovely on Marie, Kitty, or Dorothea. Then we talked solely about national costumes till D & I had to leave – what I want is a hood cloak, but they cost £5. When we were leaving, in desperation I asked Mrs P. wasn’t it a nice card I sent her (Virgin & Child from the Aonach) & then K. asked me had I done their 3 cards myself? They seemed to think I couldn’t have. With all the scratchings out I think they might have seen they were amateur, but people are extraordinary.

Saturday 29th Dec. – Annie came to afternoon tea & also D. Aunt H. was there too, & A. doesn not talk freely in a large company. I wish I could read Perfect Way with her. She didn’t read either the Daisy Chain or the Trial when C. Collins had them. Kitty came to tea, & Uncle Charlie was greatly impressed with her chilblains. I think he enjoyed the

company. We were talking of Uncle Tom’s Cabin which Kitty had never read, & I got it from Suirview to show her the pictures which appeared to interest her. She has a blessed power of being interested in things that you tell her, & in people especially. The more I read that book the more I am impressed by its merits & the more I like St Clare. Its only now that I am beginning to appreciate Uncle Tom himself. K. was looking awfully pretty.

Sunday 30th Dec. – Dorothea & Tom came to dinner and promised to come to tea next evening with Ben who was coming next morning. The Stephenses were coming either Tuesday or Wednesday. They were very full of a French book “L’ile des Pengouins” by Anatole France, which D. gave T. for Christmas – about penguins baptised by mistake & then turned into people & all their follies & vanities, & deceits, for following the course of human

history. From what I heard I doubt if I could read it with much enjoyment, I can’t exactly say why. I went to the club committee after tea, & we gossiped about the plebiscite, & May New thought we were wasting time. Mr Gallagher’s father had died & he was still at the funeral. Same say near here Dorothea got a letter from Ben enclosing one from Charlie Murphy in which he said he had been “hoping for the chance of going to a ceilidh with Rose” in Dublin – but he was too busy & I was too busy (I certainly wasn’t, but I believe the ceiligh didn’t happen till I was gone). I’m sure I should have been extremely glad to go. Its an encouragingly frivolous start for him to take. Aunt H. came in & they played bridge all the evening.