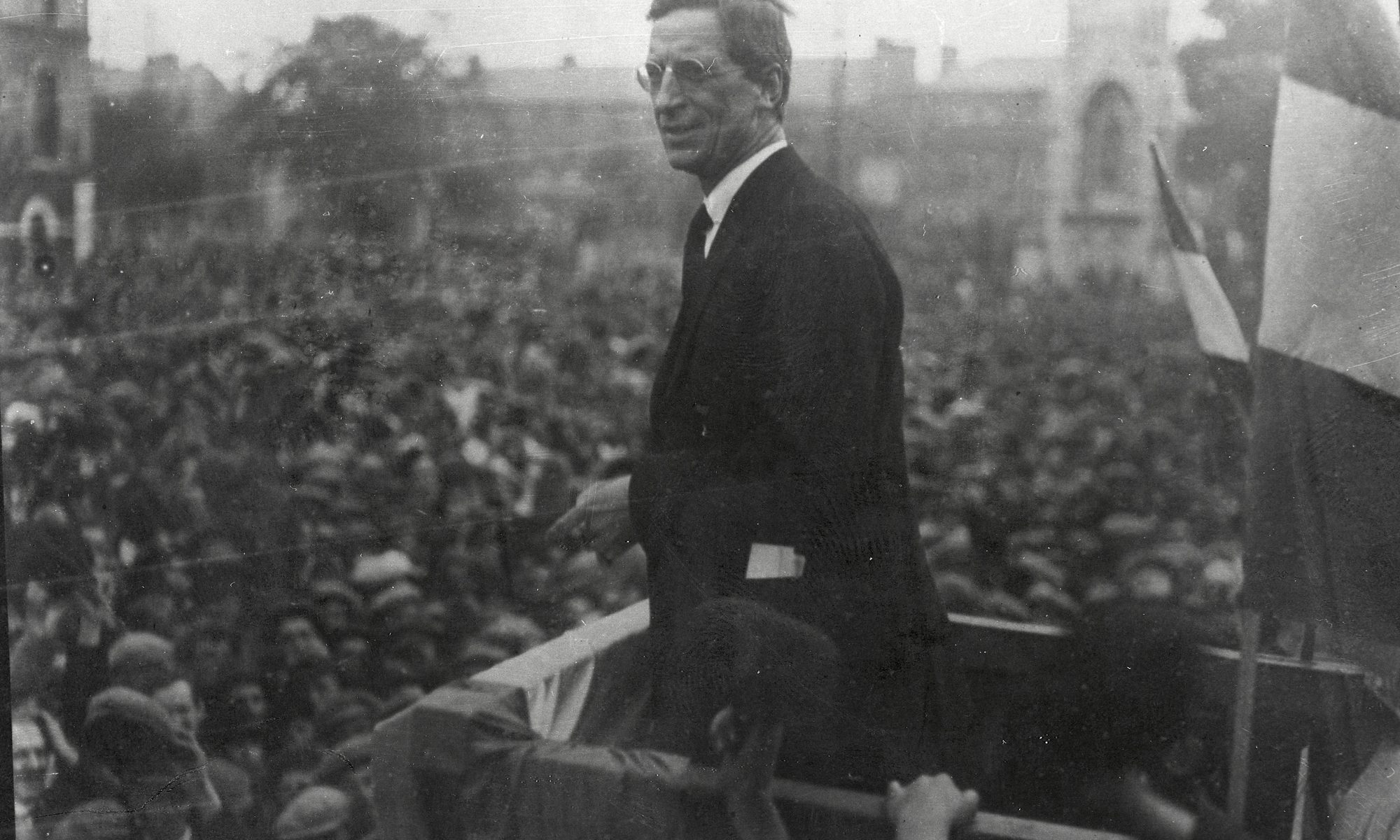 “I think it was this day the conscription bill was known to have passed the first reading. I went to town in the afternoon, to Jennings & then to Miss O’Shea, where I had to wait ages in the shop talking to her husband about conscription. Then I went to the hotel & found Kitty was up again but still set against going to Mt Melleray, so Mrs Power decided she wd go with me on Saturday.”

With the Irish at Frongoch. Aunt Is, gave her a big work bag, T. & D. gave her a big green serpent crcck that they got at the Glenville auction, & which she had admired, & a writing pad, & I gave her a little tin kettle & a bread plate. They seemed more presents to the house than to her, but she said she wanted them.

I went to town in the morning, & up to St Declan’s to say goodbye to Nancy who was going home that afternoon. D & Mamma both had letters from Tony; he seems nearly well, & sent Mamma a rather nice snapshot of the Jopling baby. I went to the Fianna hall in the evening to a general meeting. The girls are allowed to stay on there for the summer as they can’t find a place anywhere else. We made arrangements about classes, & about a walk to Dunkitt the next Sunday, and I gave a little lecture on the 9 years’ war, feeling a great fool as usual. There were a good many there.

Tuesday 9th April. – Dorothea & I went to make the meat pies, and as we I was cycling home my brakes broke altogether just as I got to the bottom of New St. I fear I must get a new bicycle. I went to the Gaelic League in the evening.

Wednesday 10th. – I nearly put the crystal pendant together at the Tech, with great labour. Miss Whitty was there, at a bas relief portrait of Redmond which didn’t seem to me very good so far.

Thursday 11th. – I think it was this day the conscription bill was known to have passed the first reading. I went to town in the afternoon, to Jennings & then to Miss O’Shea, where I had to wait ages in the shop talking to her husband about conscription. Then I went to the hotel & found Kitty was up again but still set against going to Mt Melleray, so Mrs Power decided she wd go with me on Saturday, & come home on Monday &

send up either Tash or Kitty instead. She adores Mt Melleray. They talked about conscription, callously as regards the O’Toole boys as usual.

Friday 12th. – I went to the Tech & finished the pendant except for boiling it in acid. In the afternoon I went to visit Miss Rowe who has been minding Mrs Coade since he was hurt but had been too busy to be visited before, of course. She was just coming in from town, & sat & talked to me a while, & was interested to hear I was going to Melleray. She said she was pretty sure to be there still when I came back, though Mrs C. was a good deal better.

Saturday 13th. – A very fine brilliant day. I went down to the hotel and found them just finishing dinner.  F. Lynch was there on business of Egypt and there was a detective in the hall looking for him, whom Mrs P. dealt

with in a very masterly way, referring to him afterwards in the train to F. Lynch & others as “that lady.” We were not long settled in the train when Lynch, Seán Lane & Puzzau joined us, on their way to Cille Mic Tomáyín & they & Mrs P. kept up a lively conversation all the way. Lynch is very plain but agreeable. They all smoked, of course. Lynch told us he was once touring in Tír Conaill with De Valera, & as they passed a nice little country house De V. said he wished to goodness politics were brought to a successful issue & he settled in a country house like that, to study mathematics the rest of his life. They country was lovely, blazing with furze and full of primroses & the trees budding & the mountains gorgeous in the sunshine. Mrs P. knew one of the carmen at Cappoquin & he drove us up to Mt Melleray

but I don’t like him, he doesn’t consider his horse on hills & doesn’t like other people to do so. We were welcomed at the guest house by Bro Patrick, Mrs Power’s friend, a rather saintly looking person with a resemblance to Fr Dowley in a brown habit. He gave us tea & bread & butter & cold meat, & we went to compline in the chapel, which consisted largely of music.  After it we went down to the house outside the gate where women lodge. It is a glorious prospect of big brown hills & mountains all around. There was one other guest, a Miss Jordan, a pleasant little dark woman.

Sunday 14th April. – Fine day but cold & windy in the morning. We went to mass at 8, there were a good few there. It was low mass, just a priest & two little servers murmuring before an alter all the time, & then communion, & then

an absurd doctrinal sermon mostly about Adam & Eve, from a very nice looking elderly monk with a charming voice. We were released at last at 9 o’clock for breakfast. Br. Patrick was rather given to sermonizing us at meals, & Mrs Power & anyone else that was there drank in all he said for gospel. Mrs P. & T went to high mass at 10.30; all the boys from the school came streaming into the gallery & sang beautifully; altogether it was a pleasure. After that we went for a walk up through fields & past waterworks, a good distance, to the long low brown hill between the monastery & the real mountains. We ascended it & got a grand view from the top, of all the mountains & the road to Cluain Meala running along the valley among them. The nearest is called Cnoc na fallia; I don’t know the right spelling

of it. Coming down we met a man to whom Mrs P. talked about conscription, as she does to everyone she meets, & he has 2 two might be liable & who were gone to a meeting on the subject somewhere near. We went to Vespers when we got back & after tea to compline, both beautiful music with the boys in the gallery singing. [Superscript above: & down the mountain by a sort of lovely road with a plantation at one side to a furze boggy slope. Mrs P. bored me with too much praises of the monks & of Almighty God.] There was a Mrs O’Loughlin from Roscrea there this evening & the next day, who had a son a novice in the monastery.