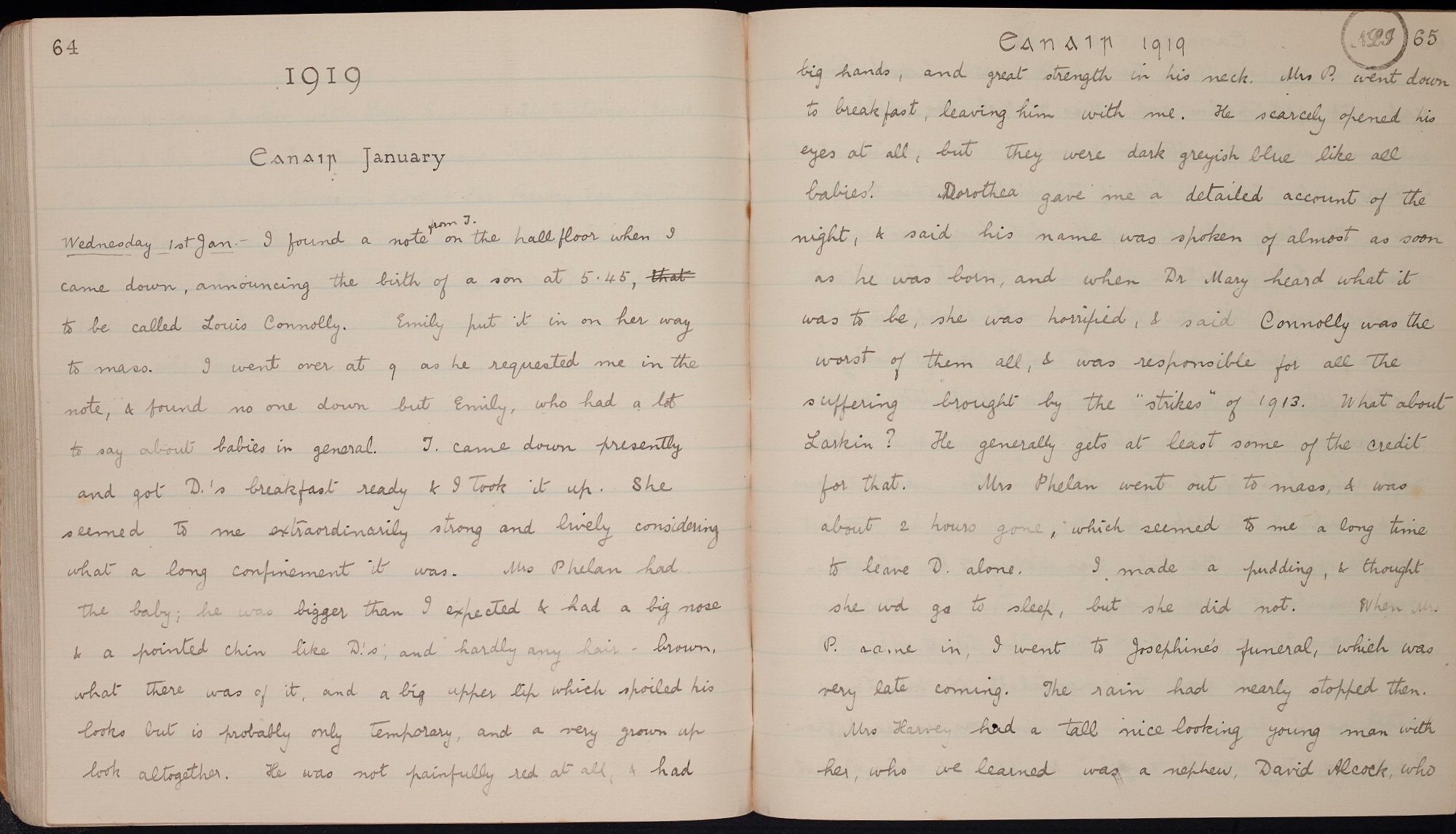 “No news. D. seemed to have gone back again. There was a committee at the Club, & frightful revelations of the rioting & revelling & throwing bottles from the roof that went on during the election times. The caretaker is not a bit of good. Connolly as usual wanted to get all the women turned out of the Club. Miss Skeffington, Mrs Phelan, Mrs Gallagher & I were appointed [to] a committee to make rules about the girls. Miss S. spoke very well to about the behaviour of the men being worse than that of the girls; she feels very strongly about that.

Monday 30 Dec. – No news. D. seemed to have gone back again. There was a committee at the Club, & frightful revelations of the rioting & revelling & throwing bottles from the roof that went on during the election times. The caretaker is not a bit of good. Connolly as usual wanted to get all the women turned out of the Club. Miss Skeffington, Mrs Phelan, Mrs Gallagher & I were appointed [to]

[Superscript: We heard of Josephine Harvey’s death early that morning, of heart failure & pneumonia. She was only ill since Xmas day.]

a committee to make rules about the girls. Miss S. spoke very well to about the behaviour of the men being worse than that of the girls; she feels very strongly about that.

Tuesday, New Year’s Eve. – Fine cold day. I went to town in the morning and seemed to do a lot of errands. Mamma was over at St Declan’s all the morning & from 3.30 to 12 p.m. D. had slight pains all day, & when I cd no longer refrain from going over after tea, I found her & Mamma & T. & Mrs P. all sitting round the fire. Mrs P. is a sister of Mrs Jerome Connolly, and has great stories about her children.

(62)
Books in 1918.
Memoir of Jane Austen, with Lady Susan & The Watsons. Jane Austen & her Times,Curious Happenings. Keren of Lowbole. The Belfry. Spring. Sovereign Love, & The Briery Gap, by T. C/ Murray. Jan & her Job. The Image in the Sand. The Lion’s Share. Mary Pechell. Collected tales, by Barry Pain. Mrs Maxon Protests. In the Fog. The Countess of Maybury. The Woman who Forgot.

Wednesday 1st Jan. – I found a note from T. on the hall floor when I came down, announcing the birth of a son at 5.45, that to be called Louis Connolly. Emily put it in on her way to mass. I went over at 9 as he requested me in the note, & found no one down but Emily, who had a lot to say about babies in general. T. came down presently and got D.’s breakfast ready & I took it up. She seemed to me extraordinary strong and lively considering what a long confinement it was. Mrs Phelan had the baby; he was bigger than I expected & had a big nose & a pointed chin like D.’s, and hardly any hair – brown, what there was of it, and a big upper lip which spoiled his looks but is probably only temporary, and a very grown up look altogether. He was not painfully red at all, & had

big hands, and great strength in his neck. Mrs. P. went down to breakfast, leaving him with me. He scarcely opened his eyes at all, but they were dark greyish blue like all babies’. Dorothea gave me a detailed account of the night, & said his name was spoken of almost as soon as he was born, and when Dr Mary heard what it was to be, she was horrified, & said Connolly was the worst of them all, & was responsible for all the suffering brought by the “strikes” of 1913. What about Larkin? He generally gets at least some of the credit for that. Mrs Phelan went out to mass, & was about 2 hours gone, which seemed to me a long time to leave D. alone. I made a pudding, & thought she wd go to sleep, but she did not. When Mrs P. came in, I went to Josephine’s funeral, which was very late coming. The rain had nearly stopped then. Mrs Harvey had a tall nice looking young man with her, who we learned was a nephew, David Alcock, who

has been in the shop with them for a year. Leopold Grubb read the 90th psalm and Miss Walpole rea spoke. Mamma spent the afternoon & some of the evening at St Declan’s and Eileen & Hilda & the children came to visit me. The baby behaved perfectly, but George has no manners. Eileen kept on giving him cake at tea whenever he asked for it till the dish was nearly cleared out, & I had a few sweets on a little plate, which he kept asking his mother for instead of asking me, & wouldn’t take no for an answer, which is a detestable thing in a child. Eileen will ruin him if he stays here 4 months. Aunt H. came in & worshipped the baby, and Tom called on his way out from the office. The baby was willing to be interested in any number of fresh people.

Thursday 2nd Jan. – I went to town for tickets etc. This is the day people used to congratulate me on Louis & talk as if the great beauty of him was his sex, & then I wd say “They wanted a girl”, & they wd obviously not

believe me. Mrs Bell was one of these people & Miss Doyle another. I went over to St Declan’s on my way home & Mamma was there all the morning & got overtired & chilled from it. D. looked better than the day before, and the baby seemed all right but had a rooted objection to taking any food. Nancy had written a card to say she was “in such a whirl of excitement she couldn’t write”!! There was an election committee meeting a.t. all about finance, & got most of my business done with Kenny, who is the real head of affairs, & felt rather a fool, but it was Whittle who got really dropped on, for bringing in Volunteers on the recommendation of strange helpers without consulting Barry.

Friday 3rd Jan. – I spent the morning at St Declan’s while Emily went out, and made a tart for dinner & washed dishes. Louis was more awake this day, and his nose was getting a very pretty shape.

After dinner I went up again while Mrs Phelan took a walk, and Aunt H. came in, & Miss Elmes came to visit D. Mrs Jephson seemed to think she can keep Miss E. for ever, and apparently no one is to suggest the contrary to her, so D., who had Miss E. engaged for the 4th January, is to be deprived of her altogether, which is just like medical etiquette. I went down town to the hotel then, and had tea with Kitty and Tash. Mrs P. is still bad with rheumatic fever & can hardly move – it seems going on for ever. They asked about Dorothea & the baby & Tash said she wd love to see him & she was very fond of children, & Kitty said she wasn’t fond of children, just after she had been talking with the greatest enthusiasm about Cathal Brugha’s daughter Nóinín aged 4. They were both very enthusiastic about his little girls, & Tash was praising Begas’ little daughter Valerie too. Its usually little girls they admire.

Kitty had on her pendant & it looked very nice, but Tash didn’t pay me for it yet.

Saturday 4 Jan. – Mamma in bed all day. I went to visit D., and she had a long letter from Nancy telling how Bob had got a beastly little cottagy house at Aldergrove & must go & live in it before March, so they are to be married on the 11th February. Dorothea considers she will go to the wedding & take the baby, which seems rather risky. It’s a pity Bob can’t go and live in the house alone till March. N. sent a very funny cot-cover with chickens & cats cut out & sewn on it & a naked baby in the middle.