Monday 30 June. – Cloudy dull day. I suppose we went out; I know we went down to the south end of in the afternoon & on to the little strand under Knockarelish. Tom was in town all day.

Tuesday 1 July. – A lovely fine day. D. got birthday letters from home, one of which mentioned that they had a wire from Tony saying he wd sail on the 26th or 27th. Aunt Lottie sent her some lovely stuff for a blouse. Tom brought Emily, the cats & me to St Declan’s in the motor early, & went back & brought the rest in the afternoon. It was a splendid morning. I couldn’t stay at Suirview as Aunt Nannie ws there, but I dined there. Dorothy Jacob stayed at St Declan’s this night & 2 others, as she could not have got to her College of Preceptors exam early enough from Tráit Mór. She brought her papers to show us, English history & literature & algebra; I know nothing about the latter, but the history seemed to me tough for “preliminary.” The

literature she had done was Tales of a Wayside Inn, & of course the essay subjects were mostly warish. It might have been this evening that Dorothy was talking of the rectory near the Comeraghs where they stay, & how she had once been to Com Seangáin [Irish sp. ?] & it was “a horrid dismal place”. I need not say that pleased me.

Thursday 3rd July. – I had a cold but it was better. I went to Suirview & heard a lot of discussion about Aunt Nannie’s househunting. They’ll never get one while they are so particular. Dorothy again for the night. The senior C. of P. papers in history & geography were a fright; the only easy paper I saw was the Preliminary French. Charlie was doing the senior grade & Bernard the junior. Dorothy’s legs are a show in those bright brown stockings; she should never wear anything but rather thin black ones.

Friday 4th. – I visited Suirview & went to town. We were just done dinner when a wire came from Tony in London saying he was crossing that night on his way here. D. & I put down stairs carpets in the afternoon, & had a visit from Grace Bell. After tea it poured rain at intervals, & I visited Mrs Murray to get instructions about the knitted coat, having at last got the stuff. She is expecting another baby in September, & has turned the back room into a drawingroom. As before, there is nothing remarkable in her appearance. We went to bed as early as we could, in great excitement, & it rained all night.

Saturday 5 July. – We got up very early, especially Tom who went to the train to meet Tony. They got back about a quarter to 7. At first Tony seemed almost to be Stephen, but he very soon turned into himself. He is much browner than he was, and therefore his hair & eyebrows look lighter in compassion.

I didn’t like his moustache at first, but presently left off minding it. He explained that he was going to this Cornwall mining college for a 6 weeks course from the 21st July, & talked about the voyage, & showed us Portuguese coins etc, & gave a horrifying account of the time he had the abscess in his leg 2 years ago, and went to bed till dinnertime. I went with Mrs Kinsella to begin her interviews with the petty sessions clerk towards getting a passport, & took Louis round town in the perambulator, which is different in some streets, & dined at Suirview. They were all very preoccupied about different things, Aunt Ni’s search for a house etc, & Aunt H. was in bed. We went for a short motor trip a.d., but didn’t start soon enough to go very far. We went to Greanaigh Castle, & D. had to stay in the car with Louis while we went in. Louis is a great

nuisance when you want to do anything. Tony was interested in the castle, & went up the wall in the inner part of it to where the narrow doorways begin, with all his old spryness, but reported that there was no stairs to be found there. We also went down to the bottom of the river tower, where I never was before. Tony behaved well & took a proper interest, especially in the hanging of the 6 men out of the drawingroom window. We went on a bit further, but Tom found the roads bad & we came home sooner than wd otherwise have been needful. It was a lovely soft misty evening, making the country look exquisite. We came home by the road past the railway water cistern. After tea, after Louis was put to bed, Dorothea & Tony went down to visit at Suirview.

Sunday 6 July. – Very fine hot day. We did not go out in the morning. Tony attended Louis’s

bath – I forgot to say that he & Louis were very pleased with each other. He seemed to me more grown up than he used to be, with the contrariness gone. I had to go to the feis immediately after dinner. Of course it was an hour or so late starting, & Miss Doyle, Mrs Daly etc, were running a tea room & were thus provided with a reason for not going to the platform. I attacked them about it afterwards, but of course they had good excuses. Liam de Roiste spoke, mostly in Irish, & very well,but he’s a remarkably plain man. Mr Butler & I went to the history at once, & I took the juniors (1782 – 1850) about 8 or 9, & he the middle ones (Young Ireland Movement). I heard him ask one what impression the movement had left on her mind. I went off as quick as I could because the motor was waiting for me outside, & found them trying to see over the wall. There was only a very little petrol so we could only go a little way out

the Cork road, which is always Tom’s favourite. Louis was with us of course, with his white tassel sticking out and blowing in the wind. It was a lovely sunny hot afternoon. Tony was continually being struck with the rosy complexions of the public here, after the sallow Portuguese dagoes; also he appreciated the green country. We had tea out in the garden, and Louis was very cross and had to be walked a lot. There is most gorgeous sweet-william there now. 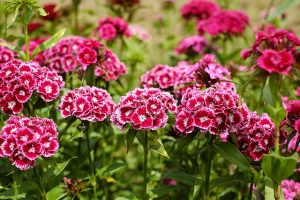 After Louis was in bed we got some music. Tony’s voice seems improved rather than otherwise, more dependable and grown-up; perhaps mellower. Dorothea said it was the loss of the Cork accent that helped him to produce it better. He sang King Henry’s song better than I ever heard it, and Who is Sylvia, and To Music as well as he could with out knowing the words, and Valentine’s song, and the Mariner in his Barque out of Maritana, which is delicious – those soft, rather melancholy songs seem to become his voice almost better than anything. I wish When All was Young could be set for a baritone. He also sang Phyllida Flouts me, but I care rather less for such songs than I did, I’m getting to [sic]

careless about the words of songs, which I suppose is a sign of progress. So far from feeling cold after Portugal, Tony seemed to suffer from the heat, & spent a good part off [sic] the evening with his coat off & his shirt sleeves rolled up, showing beautiful arms.