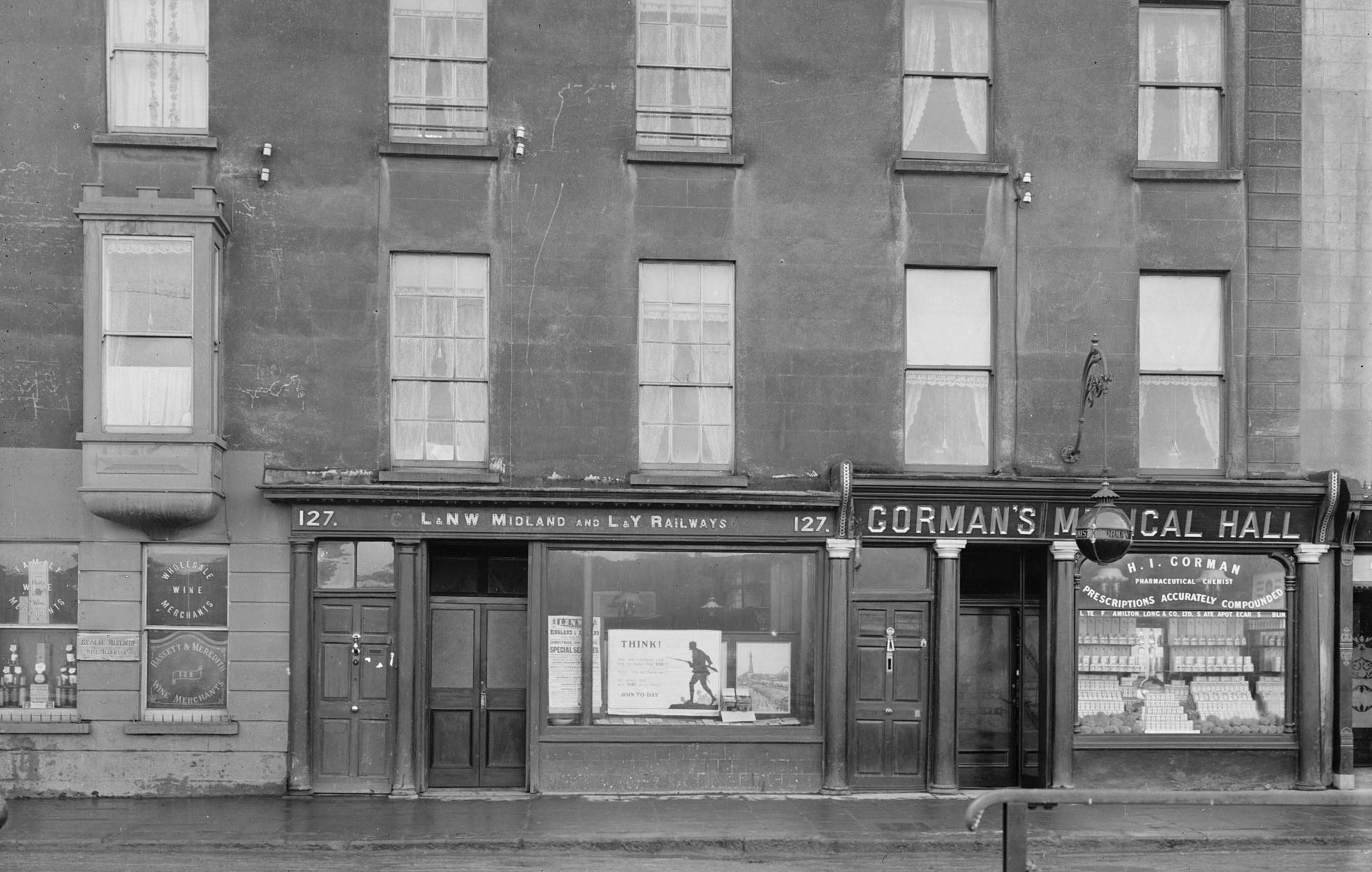 “I read out the Constitution and talked about the work that should be done & the way C. na. mb. women had distinguished themselves in the rising (which frightened 2 or 3 suspicious characters out of joining)…”

Monday 29th April. – I visited Charlotte in the afternoon, with the Protestant and conscription protest, which Tom wanted them & the F.O.R. people to sign. Charlotte wouldn’t sign it, because it would help people whose objections to conscription are not religious & who have no principle against the fighting in itself. We afterwards found that the F.O. R agreed with her, for none of them w.d. sign it. They sent a

letter to the local press, signed only by Charlotte as sec, explaining how purely religious their objection to war was. They seem to have no special objection to conscription, but lump all war together. She told me, when we were discussing Christ etc, that she thought he was sometimes very near me, which was a great surprise to me. I went to a Gaelic League committee in the evening. They hadn’t the feis syllabus out yet, so the industrial exhibition had to be cut out, as Miss Doyle held that there wouldn’t be time for the elaborate work to be done now – or that people wdn’t do it coming on the summer. There were complaints that people dance there every evening, & hurry through the classes to get to the dance, & a rule was made that Connolly or Ward should call there every evening to see what’s going on & turn out dancers if it’s the wrong evening

for them. I went up to St Declan’s then to say goodbye to Dorothea & Aunt Bessie who were both going to Cork next day. D. had a letter from Tony with a group photograph including himself, Edward, Mrs Rich, the S whole Mascarenhas family & many people that we never heard of. Mrs Rich is a nightmare, Edward is a big blackhaired boy who looks as if he could be very stupid & stubborn. Tony has a moustache & looks very thin & delicate and saintly. He says his leg is practically well.

Tuesday 30th April. – I went to the hotel in the afternoon & found Kitty & Tash rubbing up a rusty old bicycle in the yard with the help of a young man from Mullinarat or somewhere in that direction, called Kavanagh. Kitty came in with me & we had tea, then Tash & Marie came one by one. They approved of my hat that I trimmed. I came home to tea, as Tom was

coming to us, & after tea I had to go to the first first aid class in the club. We had it in the billiard room, & there was a great crowd. It was all about bleeding, she didn’t go by the book at all. [Unclear short hand text here]

Wednesday 1st. – Dull damp day. I went to the tech & worked at my new ring & brooch. Committee in the evening about speakers for meetings & visiting parish priests to find how the defense committees are to be formed. I was in the chair.

Thursday 2nd May. – I went to the Fianna hall in the evening & found the girls had 2 classes that night, so I left the history for another week &

attended the first aid & signalling & was a great dunce at the latter, which was well taught by Maggie Myles. Tom came to tea & Aunt H. came in for bridge. I got an invitation from Mrs Dr Murphy in Carraig to go up there for Sunday & give an address at the opening meeting of a Cumann na mBan branch they are getting up there.

Saturday 4th May. – A lovely fine warm day. Tom came up in the afternoon, & he & I went for a ride out to the cowslip field this side of Callaghane. We got some there & went on to Callaghane & home by the old road. It was a lovely afternoon, & the furze was at its very best & there were lots of primroses by the road a little beyond Callaghane. I said the primroses proved that beauty is an abstract reality, & T. disagreed. The same with regard to righteousness

except that I had no proof to advance of that. After tea I went to the station & so to Carraig in a carriage crowded to suffocation. Nobody man now ever seems to dream of offering a seat to a woman in a train or a tram. I didn’t see Mrs Murphy at the station so I went to her house, to learn from the maid that she had gone to meet me with Brigid Ni Dublaoic who is home again. So I went back looking for them & presently encountered Brighid in the street, looking thinner but otherwise not changed. We went back then, & had tea at the Murphys’ & sat in the drawingroom until a late hour. Séamus is gone to a nuns’ boarding school at Át Tuain. Mrs M. is as fat as ever, & as pleasant & kind. Dr M. told a good story of the appalling meal offered to him by very hospitable people in the Cormeragh the first time they saw

him, when he went to attend their son in pneumonia. They have a lovely big black retriever called [Superscript: Séan O’Floinn came in & stayed a good while.] Gypsy. I was given a room full of books, with a dressingroom off it & a stairs going down into the garden, & spent a long time reading one of the books – The Making of a Bigot by Rose Macaulay.

Sunday 5th May. – They went to mass in the morning & I stopped at home. At one o’clock Mrs Murphy & Brighid & I went to the Town Hall, & found a very large meeting gathering. There were nearly sixty altogether, & some of them middle aged. I read out the Constitution and talked about the work that should be done & the way C. na mb. women had distinguished themselves in the rising (which frightened 2 or 3 suspicious characters out of joining) & made play with that phrase that some corporates used

about Madam – a gallant & chivalrous soldier of liberty – at the same time explaining that they could be all that without taking a share in bloodshed, & that that wd not be required of them. I also warned them against giving way to personal jealousies & taking offence easily. Seán O’Floinn was reporting the meeting, & I can’t say I was much pleased with the way he turned out my speech. Then they went into the business part, electing officers & committee. Mrs Murphy was in the chair, appealing frequently to Seán for help. He was president, & Brighid secretary, & Dr Murphy is to give them first aid lessons. We were home by 2, but didn’t get dinner till nearly 4, & Maurice Hickey sat by & talked to us all through it, mostly about that day’s Defence Fund collections, which he had been presiding over. Dr & Mrs M., especially Mrs, asked him

how much each person had given, & he told them. They were pretty stiff with anyone known to be well off who didn’t put down something solid. After dinner I started up to Sheskin, & it was a most lovely walk – the furze more in its prime than I ever saw it there – but the distance was so hazy that you’d hardly know there was a mountain in sight. There was no one at home but Gertrude & Louis, except a beautiful young brown collie called Dermot – their parents were gone to the yearly meeting. Gertrude took me all round the place & asked   talked about conscription & the awful things that are done to C. C in England. She feels more with the people on the conscription issue than any other Quaker I have met. The furze was blazing all over the hill & the garden was full

of flowers (Clematis particularly). The whole place is paradise. We went & sat on the side of the road at 7.15, when Dr Murphy & Mrs Murphy were to call for me in their motor, but they didn’t come till we had gone back to the house in despair. They & the grubbs seem pretty well acquainted. We went home by Coolnamuck with a beautiful sunset going on which made the peace a perfect dream. I hardly know any more exquisite place than that. Dr Murphy’s mother & aunt (Mrs O’Donnell) & subsequently sister (Mrs Gill) all came in in the evening, and we played bridge. There was great difficulty in finding a whole pack, Séamus apparently having lost a card or two out of several, and when I asked Dr Murphy to pipe afterwards, he said he had no reeds, that Séamus had destroyed his last. He must be either a spoiled or a destructive child, but Mrs M.

told me he is devoted to Twiddles, the cat. I finished the Making of a Bigot, & I don’t see how it could be expected to end otherwise, in fact I think Eddy must have had a screw loose.