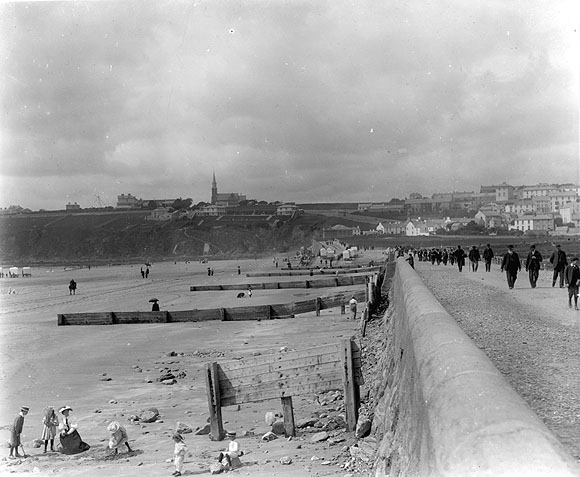 Monday – Whitmonday 24th – Very hot day. Tom & D. and Louis went to Trait Mor & spent the day on the strand & had a great time & came back sunburnt, especially Louis. They said he used his saucepan & spoon for a spade & bucket after he had had his dinner. I packed & visited Aunt H. & Aunt N. &

Is & Mrs Kinsella. After tea I took my knitted coat to Mrs Murray & she put in the sleeve for me. She talked a lot about her husband and the villainy of O’Shaughnessy & the difficult position of Technical school teachers, and some what about the fidelity & virtue of Gyp.

Tuesday 25th. – Fine hot day. I had to go to Jennings in the morning, but he hasn’t my plates done yet. I visited the hotel to say goodbye, & Mrs P. was down in the back of the hall like old times. I visited the carstand Powers in the afternoon, and they also were interested in my plans & willing to send their rings to the exhibition in June. Aunt H. was going to Orristown that evening for a few days, so we went together as far as Killinick and Aunt H. met her. It was

a lovely evening, but it got misty & cool after we reached Ror Táir [Irish sp.?] & I didn’t stay on deck long, though there was a fine cat there. It was a very smooth passage.

Wednesday 26th. – Damp misty morning. The train left Fishguard at a few minutes before 5, after waiting an hour there, and the country at first was lovely, with the crowds of little bushes growing close together and hawthorn and buttercups. But it soon got dull, and I was very sleepy & tired. Maya met me at Paddington & I got something to eat at a little dairy place near there, and we returned to Paddington and got to Gerrard’s Cross in course of time, where Mr Matthews met us & brought us to Chalfont in a motor. G.C. is a rich suburb sort of place, with separate houses standing in

gardens; the country beyond it is pretty, with lots of trees & a good deal of us & down, & meadow full of buttercups & seed grasses, and old tile-roofed storybook farmhouses. Chalfont is just a village, not interesting, but Milton Lodge is much nicer inside than the Manor Farm. We had a sort of fruit lunch when I arrived, and tea later on, & Brenda took me down the village & into the churchyard, which is very like where Gray’s elegy might have been written. A lovely fine evening.

Thursday 27th. – Very hot day. Brenda took me to some heavenly woods on an estate near here called Newlands, we took lunch & stayed there till the afternoon. There were rough open spaces & paths &

woods of different trees, one beechwood on a slope was almost the loveliest of all, & a cottage with a lawn & a rockgarden & a pool with flaggers, where a friend of Maya’s come for weekends; a perfect place for lovers to spend weekends in. Brenda wrote letters; she has friends who write even longer letters than she does herself, & keeps up a large correspondence.

Friday 28th. – Maya & I did some cleaning on the parlour – polishing old copper sconces etc. She works all the time, though there is so little cooking done. J. E. M. has a delicate throat & needs a lot of looking after, & Maya wait on him too much, I think, but I suppose because he is delicate. She & I cycled to Gerrard’s X in the afternoon & did household shopping – everything, almost, has to be brought from there. We came back

by another road, through Chalfont St Peter, & she showed me the Greyhound Inn where Jeffrey’s stayed once & held a court there. But none of these inns with pictorial names have illustrated signs as they ought to have.

Saturday 29th. – More house cleaning in the morning. Maya talked a lot about Nora, she seems to have a strong taste for men, & M. is glad she is safely engaged – I think she must have flirted a great deal in France. Charlie Whitney is now setting up a motor repair garage with his brother in law W. Lamb at Inchicore, & wants to marry soon on the strength of it. Brenda wasn’t well these days & was a good deal in bed. The rest of us cycled to Jordons in the afternoon, to a committee re the William Penn pageant. Jordons seems to me entirely new, what there is

of it; horrid glaring new houses, bright red, roofs & all. But there is a lovely wood there.

Sunday 30th May. – Very fine hot day. We cycled to meeting at Jordons, a pretty old house in a lovely garden, half wild, with a graveyard in front & a dell full of flowers behind, with trees above. Meeting just like any other. In the evening Maya & I cycled to Gerrard’s X to a meeting of Friends to discuss the duty of Quaker employers in the labour question. There was a very attractive middleaged man – Barrington Whitlow – who had clear straightforward opinions & held that Friends, everyone else too, of course, should ask their employees to cooperate with them in directing their businesses if they wanted the coming revolution to be a bloodless one, & a prudent careful man, much younger, Ernest Warner, who depreciated the uses of the word revolution – didn’t

think there ever had been a bloodless one & it was a dangerous idea to encourage & a horrid woman whose name I don’t know, who thought shorter hours would benefit “them” more if some public houses could be closed (Whitlow had been quoting a workman who said he had never been so poor as last winter, or so well in health, & preferred short hours & poor pay to working overtime, from a reasonable, not an idle point of view, & she spoke eloquently on the tyranny of trade unions, I never heard a more exclusive, un-Christian tone in speaking of the poor. Whitlow put in a word of excuse for unions being a bit tyrannical, considering all they have had to contend with, & pointed out with mingled gentleness & firmness that the way for Quakers to do their part towards making the coming

revolution bloodless was to abdicate their positions as masters & cooperate willingly with their employees before they were forced to do so unwillingly. A few others spoke more or less on his side. He was very good, & reminded me of Edward Glynn. When M. & I got home, we found Nora & Charlie there, he having come over for the weekend & picked her up in London. She is a very big buxom girl, with better features than Brenda, & a lovely complexion, but rather too fat, & with spectacles. She is cheerful & rompish, with a curious and rather attractive voice – not so much English accent as Brenda. Charlie is very handsome, with dark hair & brown skin & very fine clear-cut features; a sort of likeness to Charlie Murphy, but a much better nose; slender & rather tall with a charming American accent & a very nice expression. They were always

sneering at each other & wrangling in a silly kind of way; either by itself would of course have been very preferable to both together.