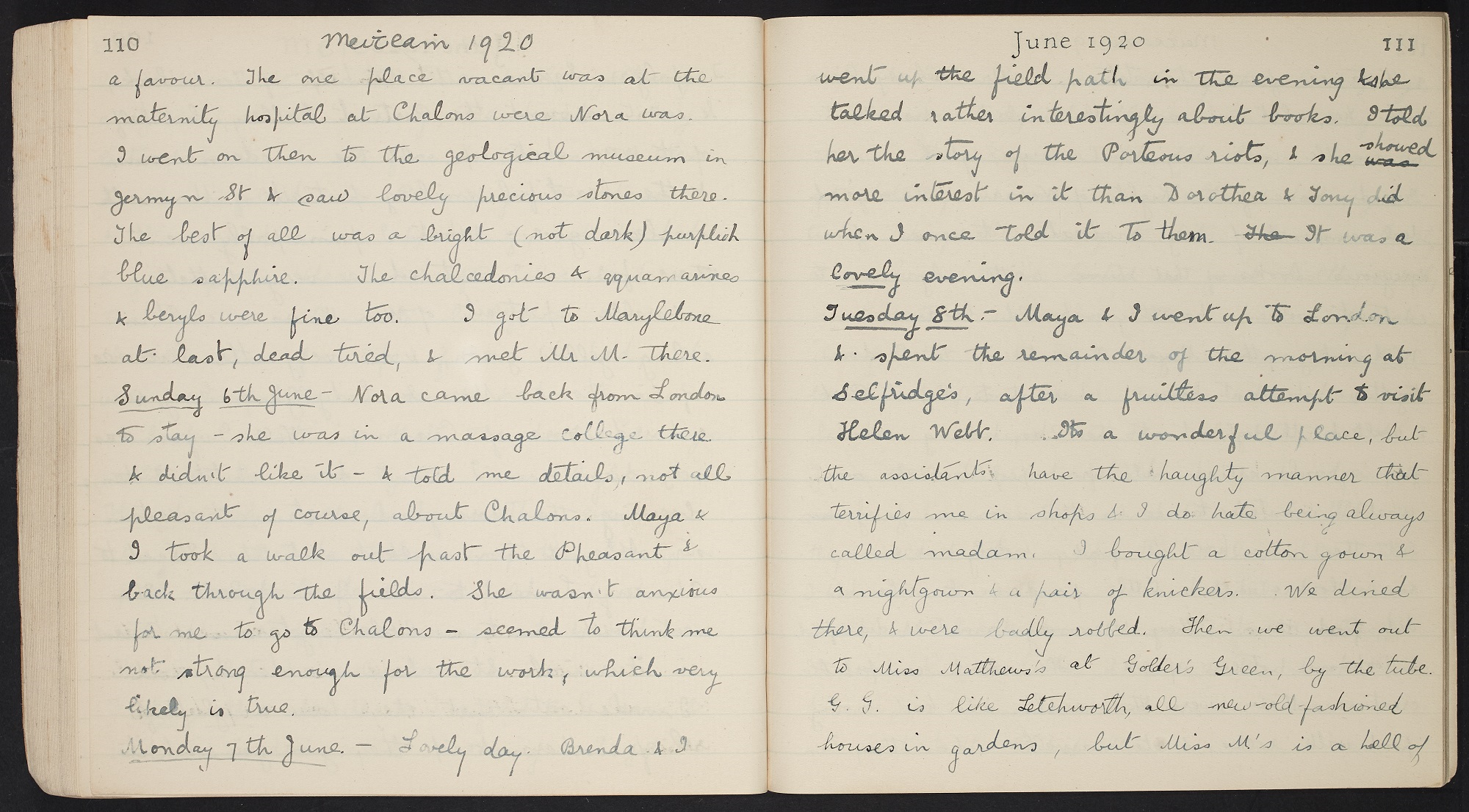 “Maya & I went up to London & spent the remainder of the morning at Selfridges, after a fruitless attempt to visit Helen Webb. It’s a wonderful place, but the assistants have the haughty manner that terrifies me in shops & I do hate being always called madam. I bought a cotton gown & a nightgown & a pair of knickers. We dined there & were badly robbed. “

went up the field path in the evening & she talked rather interestingly about books. I told her the story of the Porteous riots, & she showed more interest in it than Dorothea & Tony did when I once told it to them. It was a lovely evening.

Tuesday 8th. – Maya & I went up to London & spent the remainder of the morning at Selfridges, after a fruitless attempt to visit Helen Webb. It’s a wonderful place, but the assistants have the haughty manner that terrifies me in shops & I do hate being always called madam. I bought a cotton gown & a nightgown & a pair of knickers. We dined there & were badly robbed. Then we went out to Miss Matthews’s at Golder’s Green, by the tube. G.G. is like Letehworth, all new-old fashioned houses in gardens, but Miss M’s is a hell of

a distance from the station. Mrs Kelsey lives with her, but she was ill in bed. Miss M. is amiable in a way, but very English. I read some of the Rights of Woman. It’s a good deal composed of very moderate criticisms of egregious women how they should behave.

Wednesday 9th. – Maya & I went in to London together, & she went home. I went to Regent’s Park & walked through it to the Zoo, seeing some grey squirrels eating nuts from people on the way. What I wanted to see in the Zoo was penguins, but they were hard to find, & only 2 or 3 in an enclosure with a little pond in it when I did find them. They were very small & dignified, & took no notice of me. The most comfortable creatures there were the seals, who had a big pond with rocks, & its marvellous how they can

swim & dart about, considering their lack of legs. There’s something horribly smooth & snaky about them. There was a splendid brown bear who got hold of a man’s umbrella, & had a great time taking it slowly to bits. He was a beauty. The lions & tigers looked in good health. Probably most of them were born there. Coming back through the park I got some sparrows to eat biscuit out of my hand, to the admiration of all beholders. I dined in Furnival St, & went to Janie Bell at 3, but behold she produced a member of her committee named Clark who told me they wouldn’t  take me for the Chalons place till I had done 6 months in some hospital, to prove I would not break down – so that was all off. I don’t know whether it was that I looked on delicate, or that Janie had said I was. I went to the British Museum them, & saw

Discobolus & the Mausoleum remains & old Greek toys, & the historical letters – one from Harry Vafter Agincourt, afraid of French emissaries going to Scotland – and I got Monmouth’s pocket book for ½ a hour the mss. [manuscript] room apparently closes at 4.45. A great deal of it was in French. He seemed very set on that charm for finding out if a person is true of their word, but I couldn’t make out how it was worked. There was a list of women’s names, & that queer little poem about Sorrow, & I had no time to read further. He wrote a very clear hand. I had tea at Shearn’s with Maya, & them stated off to the Begger’s Opera at the Lyric Theatre in Hammersmith. It was a dream. If only Macbeth had been right it would have been perfect, but he was a horror, a short plump middleaged Queen Anne gentleman, in a grey periwig & a long scarlet coat & white stockings up over his

knees. He wasn’t a bit goodlooking either, but he had a good voice like all the others, & them music was delicious. Peachum would have made a far better highwayman. Polly was lovely, but it was an awful error to dress her in pink & Mac H. in scarlet, it made eyesores of all their embraces. The duet between her & her mother “But he so teas’d me” – was almost the best thing in it all,, & then there was the blind man’s buff game in which the prostitutes betray Mac H to the police, & the “How happy could I be with either” scene, which had a little dance mixed with it, & the last scene ended with a dance, when the gallows turned into a maypole. It was all so beautifully arranged to pass naturally from one decorative well-balanced scenic effect to another, & all the acting was so good & the thing both so realistic & so funny, without a touch of sentimentality

& insincere conventional morality than popular modern English plays are full of. The escape of Mac H., where Lucy glided across the stage in a tragic attitude holding up an enormous key & he followed, stepping very high & carrying a despatch case with his initials on it, was delicious, & so was the enormous bottle of ratsbane with which Lucy proposed to poison Polly. Most of the tunes I believe were Irish. The whole play was much more openly indecent than anything modern could be, of course, but it was so plain & unashamed that you didn’t mind most of it, though there were appalling bits, like the betrayal of Mac H. by Diana what’s her name that kept the gambling hell, when she represented Peachum & Locket to him in the dark as “a man most fair wench – a virgin – fainting with love!” The way he came forward at these words destroyed any possible pity for him. He was a beast, with his periwig & his fat legs. I had to go back to Charing

Thursday 10th. – Wet morning. I went into London & dined at Eustace Miles’s & made my way to North Woolwich via Waterloo & a free ferry across the Thames.

I found all the Brewses out, & had to hang about Victoria Park by the river for ages till they came in. Mrs B. has been ill & still looks badly. It’s a nice house inside but its a beastly neighbourhood. Dr Brews is rather short & very bald, & talked to me about Ireland as if he hasn’t been there for 30 years, & then went out to a case. Alan is shy & silent, & very like himself as a small kid. Ruby is pretty & very nicely dressed & refined looking & pleasant more grown up than Nora. She is in

an artschool in Kensington, they showed me a lot of her drawings after tea, – ugly models & one or 2 subject original sepia drawings which I thought very good, & a few water colour landscapes at Kilrish, rather heavy. She says there are people up to 70 at her school, some who have had no chance all their lives to learn & are only starting now. They must have a real craving for it. I started back early – about 8, & between bus & undergrand reached home by 10!

Friday 11th. – I went into town to the R.A. – lots of tiresome pictures and a few interesting ones most of which I forget, not having the catalogue Peter the Great studying the model ship was one; & the Enchanted Shore. Some of the pictures of women were beautiful & there were beautiful wooded landscapes. I imagined a gallery in which men should get so much attention as women do in real ones – all the lovely male

pictures I know of & a lot of imaginary ones – Red Hugh asleep at Castle Kevin, Tamlane, Lancelot in various scenes, Buchulain at the ford etc etc. I went to the Royal Exchange after dinner but it was a shut so I inspected St Paul’s & admired it more than ever before. Then I went to Janie Bell’s office by appointment & we had a good tea at E.M. & so to the Colisseum. I was surprised he concented. We saw marvellous cyclists who could ride a front wheel  or back wheel alone, or on each other’s shoulders or anyhow, & a couple of girls who sung nicely in coloured lights, & a short medieval play about an armourer’s shop, with a young man in it who was a pleasure to look at, & a men who did miracles with a rope, etc etc. Altogether it wasn’t so funny as I expected. She gave me an invitation from Rebecca to spend a night at Salisbury with  her & see Stonehenge. J. went very early.

Saturday 12th. – I went to London on a bit longer

but far pleasanter than the tube – & visited H. Webb. Then I met Ruby at E.M. for dinner so we both met H. Webb at the Ambassador’s later on. She took us to very good seats, being slightly deaf. The play was A Grain of Mustard Seed – meaning faith of that size – by I forget whom, said to be the best play since 1914. If so the intermediate ones can’t have been much. It was about a rich vulgar man overflowing with beneavolence, who was taken up by the Tories till they found he really wanted to carry out some scheme about land by promising which he had won his election. There were a couple of good political scenes, one in his committee rooms in which a plainspoken chauffeur was the chief speaker. The daughter of one of the Tories got engaged to him because he was so rich & “unclear text” & then was impressed by his goodness & wouldn’t give him up when the party did. She has another lover, young & handsome,

whose mistress she had been for some time. There was one scene between them, which he did very well, but she was disgusting, hanging limp in his arms as if she were just enduring him for money. Of course she had to have a different gorgeous dress in every scene, so gorgeous that she herself was quite secondary to them. There was one good speech in the committee room, where the agenet appealed to a very cute young secretary to confirm his statement that the war was fought for the freedom of small nations, & got the answer, “I believe that is official.” We had tea in a close by restaurant, in a thunderstorm, & then parted. H. W was very pleasant.

Sunday 13th. – I went into London & home by the 2.30 from Paddington, rather disappointed not to have seen Mrs Kelsey at all. She wasn’t well & in some severe state of nerves that made her sit alone in her own parlour when she was

downstairs. I walked from Gerrard’s Cross, & it was hot. I do not get tired walking frightfully soon in hot weather. The house was in a great fuss because Brenda was going back to school next day & her clothes being got ready.